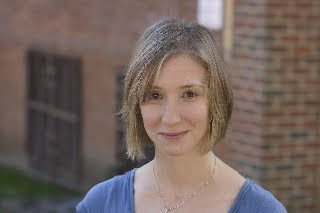 Q: You have a children's play going up at South Coast Rep this season. Can you tell me a little bit about it and how you came to write it?

A: It's called Ben and the Magic Paintbrush and it's based on a Chinese myth about an orphan who finds a paintbrush that brings whatever it paints to life. It was a story read to me when I was very young, and I remembered it because the image of a painting developing an independent life and leaving the canvas always stayed with me for obvious reasons. In my hands it becomes a story about two little kids who find this magic paintbrush and have to escape the unbelievably evil clutches of one Mrs. Crawly who wants to trap them in a dungeon and paint gold. It was extremely liberating to write - you can be so extreme in the form - truly evil characters, truly good, disguises always work, sleeping pills make you pass out, language can be so playful - it's a totally different sort of storytelling. It taught me a lot. In particular, it was excellent to be forced to be plot driven and to be very clear about what the story is. There's lots of jokes for grown-ups in there too. I even managed to slip in a portrait of a difficult marriage (my speciality, I've decided). I wrote it because they commissioned me - after they saw my adaptation of Great Expectations for kids.

Q: Your play Parent's Evening is going up at the Flea soon. Can you tell me about that play?

A: It's a portrait of a difficult marriage...It's about a deeply narcissistic but very endearing couple the night of a parent-teacher conference. The first half is before the conference. The second half is after. Suffice to say - things do not go well at the school.

Q: What else are you working on? Lucy Smith was raving about a new play of yours. You want to tell me a little bit about that?

A: I just finished the first draft of a new play - I've been working on it for just about a year on and off - and I am also excited about it. Whenever I write a play I send bits to Lucy. From her reaction, I can pretty much tell if I am on the track I want to be on or if I need to swerve.

Q: What are the differences between American and British theater?

A: I'm not sure that there are fundamental differences - although both the British and the Americans often seem to like the idea that British theater is inherently "better." I do think that England has a 500 year old canon to congratulate itself upon. America doesn't have that - and I think that a consequence is that Americans are more obviously invested in "new writing" and "new American voices" which I find interesting - there's a certain nationalistic streak caught up in the concept of production. The British actors I have worked with are more comfortable approaching a text cerebrally, but I haven't worked there enough to make a confident generalization in that department. It was an impression I got. But generally speaking I have seen dreadful and wonderful theatre in both places and about the same amount of each in each.

Q: Like me, you studied playwriting at both Columbia and Juilliard. You want to tell me a little about your experiences there?

A: Columbia was an incredible experience for me - Eduardo Machado who taught playwriting there at the time became and still is a mentor to me. He was the first person who made me feel like I really might be able to write and he has an incredible ability to read a play and say something like "you went off on page 56, and it doesn't come back until page 86". In my experience, he's always right. I have tremendous respect for him. He's unorthodox and if you are paying eighty grand for an education (which I wasn't, I had a scholarship) then you might get frustrated, you might want specifics, it dirties the whole process really. But for me - working with him was a miracle. I also somehow got Columbia to commission me to write an adaptation of Peer Gynt for the graduating acting class of my year and Andrei Serban directed it. Someone asked me recently what the best production I've had is - and I realized that for me it was that one. And being in rehearsal with Andrei was such an education and a joy. At one point he dressed the actor playing "the boy" in a gorilla suit, watched the scene, and whispered to me "I don't know what it means, but it's primal, yes?" Right there was one of the most succinct lessons in theatre-making I've ever had. Because who cares what it means? But of course, generally people are like "but why, but why, explain." I'm not sure that truths have an explanation. Truths speak for themselves. We recognize them instinctually. That's what makes them true. And the class I took with Anne Bogart - the collaboration class - learned a huge amount. And generally speaking it was a wonderful time for me - I had just left England, I had committed to playwriting properly, and experimentation was encouraged. It was fantastic.

Juilliard was also wonderful but in a totally different way. It provided such access. Access to great actors, to readings, to people in the profession. There was an emphasis on the practical working environment I could expect to encounter. It was very important to me in that way. And it opened doors for me that Columbia just didn't. Chris and Marsha were incredibly nurturing, and supportive, and funny and wise and honest. I had a great time, I wrote a great deal. It was all much more grown up.

Q: Tell me a story from your childhood that explains who you are as a person or as a writer.

A: When I was little I got to go and see a production of Peter Pan staring Lulu and John Nettles. Someone we knew was involved and I got taken backstage afterwards which was unbelievably exciting. I looked in a drawer on the set, and I found Peter Pan's shadow. It was made of pantyhose. That impacted me greatly.

A: Anything where the theatrical experience is organic - music, design, acting, direction, text. Which means, irritatingly for me as a playwright, the work I have responded to most recently is devised by companies. Gatz just blew my mind. And The War Horse, which is coming to Broadway I think, was just unbelievable. I also love things that feel truly actor driven - Steppenwolf's work for example. The play, even a great play, is the beginning. Everyone else should take it further. I also like to draw a distinction between contemporary plays, and political plays. I am a fan of the former, not the latter. With very few exceptions (The Normal Heart, being one) I can not stand theater designed to articulate outrage at political event. They lack complexity, and I have noticed that audiences tend to leave the theatre practically congratulating themselves for having attended - as though going to the theater were a political act. Going to the theater is only a political act if the play you are seeing has been banned. Susan Sontag said “So far as we feel sympathy we feel we are not accomplices to what caused the suffering. Our sympathy proclaims our innocence as well as our impotence. To that extent it can be (for all our good intentions) an impertinent – if not an inappropriate – response. To set aside the sympathy we extend to others beset by war and murderous politics for a reflection on how our privileges are located on the same map of their suffering, and may – in ways we might prefer not to imagine – be linked to their suffering, as the wealth of some may imply the destitution of others, is a task for which the painful, stirring images supply only an initial spark.” I find this to be such a brilliant and important observation that I learned it by heart to hiss at people who don't agree with me.

I think this is the best summation of what it's all about I've read anywhere so far.

"...being in rehearsal with Andrei was such an education and a joy. At one point he dressed the actor playing "the boy" in a gorilla suit, watched the scene, and whispered to me "I don't know what it means, but it's primal, yes?" Right there was one of the most succinct lessons in theatre-making I've ever had. Because who cares what it means? But of course, generally people are like "but why, but why, explain." I'm not sure that truths have an explanation. Truths speak for themselves. We recognize them instinctually. That's what makes them true."

$$$ Loan apply now with 3% interest rate for more details $$$
Are you looking for a Loan to enlarge your business? Do you need loan to pay off your debt and start a new life? You have come to the right place were we offer Loans at a very low interest rate of 3%. Interested people/company should please contact us via email for more details and get funded.
Email: shadiraaliuloancompany1@gmail.com