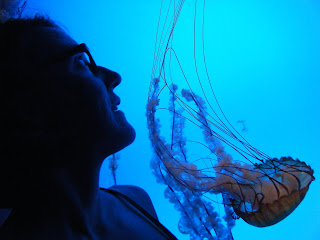 Hometown:  Born in St. Louis, Missouri, but grew up in Stafford County, Virginia

A:  A play about a family coping with a death - lots of steady, daily drinking, sudden accusations, and grasping for something under the surface to be revealed.  There are no bells or whistles really, just writing these characters during three slices of time.  It's set in the Tidewater region of Virginia, on the James River at a home I visited once.

And revising THE HEART IN YOUR CHEST, which has been a major project over the past year.  It’s a play set in a dystopian near future, populated by characters operating under one set of assumptions which is undone by their own desires and the actions of the least obviously powerful among them.  There’s a lot of action, there are fights and I’m in love with the characters.  I’ve been able to collaborate with the same director, Paul Willis, and had some excellent ensembles come together for workshops in NYC, Independence, KS and LA.  Still doing some tinkering and looking for a more in depth, on-the feet type of workshop – or for somebody to get behind it and go for it.  Which I think would be an excellent idea.

A:  I've written seven full-lengths and they each feel very different to me, in subject and construction.  A few readers have said that if my name weren't on the cover they wouldn't know it was the same writer.  If I were to pull out some threads though  -  a sense of loss and longing, the way language is used obliquely - communicating as much as it covers up, and funny in a way where there aren't really any jokes.

My starting point for most plays are places, people or moments that resonate with me and I think the motor that drives me is the desire to talk back to the world.  I am a person that gets overwhelmed by reading the newspaper, wants to call up our leaders and talk to them - ask them what they are thinking - why are they doing what they're doing. -- and I want an actual human response, canned PR speak doesn’t help anyone but the salesman.  Writing plays is one of the ways I do something with this impulse and avoid getting overwhelmed by the world.  Teaching is another.

Q:  How was your Jerome year last year?

A:  It was amazing to be able to put writing first, to say for these 12 months my job is to write plays and be a playwright.  In the year before the Jerome I was teaching full-time in Brooklyn, I'd had my first four productions - two in NYC  - and was planning a wedding (with you) it was kind of a full year.  Then moving to Minneapolis, was a huge change of pace - a very welcome one.  (It is true that if you get enough sleep you don't really get sick).  The Playwrights' Center there is a great place and it was dreamy to have a home for a year - especially one with a photocopier and postage machine.  Plus there are lots of other playwrights based in Minneapolis - and on the Jerome year too - so it’s like an instant community.

For me the job of 'being a playwright' included working as a dramaturg, teaching writing workshops with young people, reading many, many plays and being able to travel for workshops and readings - as well as writing.  I did find that my writing output did not increase substantially with the amount of time I had available.  In my imagination I would write non-stop, all day, late into the night, but in reality I still wrote about the same amount - though I was able to put a lot more time into revisions and applications.

I also discovered that I like the extreme winter there.  It's beautiful.  Oh, and I landed a job waitressing at Nye's Polanaise Room.  If you’re ever in the Twin Cities and have occasion for a boozy lunch, desire a piano bar or a polka lounge – I highly recommend Nye’s - and sit at the bar that Phil has worked at since 1968.

Q:  Can you talk about being a teaching artist and how you use theater to teach?

A:  That is where I started from undergrad - devising programs to teach through drama - structuring workshops using theater games, opportunities for creating and performing, and reflecting on the experience.  The goals for workshops can vary from the general ones like collaboration and communication, to literacy, to issues such as safe sex, bullying, prejudice  - the basic idea is to engage participants with their bodies and hearts and the process is the point - not the product.  Everywhere I have lived I have found opportunities to teach this way, either in schools, with theaters or arts agencies - or making my own programs.  I did my undergrad in England where there is an established field of this type of work.  When I moved back to the states it was less obvious where or how to do this, but mostly people just used different terminology.

Basically teaching, to me, is about creating an experience and connecting with students.  Being open to the moment, working with what's in front of you and keeping people's interest are all qualities that theater demands and are the qualities that I find most important in teaching.  Supporting people to express their experience of the world and to engage with and understand the experience of others should be a goal of education - whatever the subject - and theatre as a medium offers a myriad of ways to act, reflect, question and challenge.

A:  Very well. You are wonderful person to be married with.

A:  When I was in middle school I organized a haunted house with kids on my street.  You’d go in and be told the story of a girl whose mother was burned as a witch, who was plagued by visions, tormented by the townspeople and eventually hung herself.  I think I was the tour guide, my brother was bobbing for apples in blood, there were real cow brains (the idea that spaghetti would represent cow brains escaped me), heads were strung from the clothesline, we hung a life sized stuffed doll as the girl – and as the finale this older girl from another neighborhood wearing a long white dress came out of nowhere on roller skates wailing for revenge and chasing everyone screaming out of the garage.  Then we’d give them candy.

At some point parents demanded that we be shut down for terrorizing children and we were forbidden from ever making a haunted house again.  Something about the recklessness and enterprise of all the kids involved in putting it together coupled with the explosion of response when it was unveiled really got to me.

A:  I love theatre that feels rough around the edges, virtuosic  - and that over-used word – authentic in some way.  I love plays that feature ensembles of actors and create worlds that you can witness, or step into.  I am excited when a production allows the audience in – is porous and open to interpretation and a variety of responses.  I love writing that plays with language and theatre that embraces the complexities and unknowability of human experience.

A:  I am reading plays and writing about them here:  www.playswithothers.blogspot.com  My goal is to make this a daily thing and use it as a way to talk about writing plays now.

and sometimes I post poems here:  quarantinedpoesy.blogspot.com  I used to do this daily, now it is far more occasional.

And go see CREATURE in NYC opens in late October and runs through November.  Written by the effervesent Heidi Schreck and produced by two great companies - New Georges & P73.