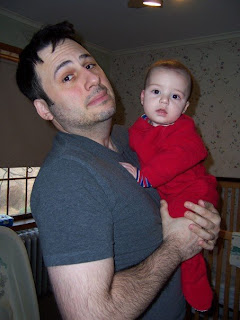 Hometown:  Rochester, NY - Brighton, but I went to Penfield schools.  Needlessly complicated, but there it is.

Current Town: New York, NY - in the leafy neighborhood of Sunnyside Gardens, Queens
Q:  What are you working on now?

A:  Finishing up two work-for-hire pieces - one a musical about the funeral of the most foul man who ever lived (or died), and a 3-d Monster Movie my friend Producer Norman Twain hooked me up with.
Q:  Tell me please a little bit about your two headed challenge play.

A:  It's sort of based on a true story, so I'll start with that.  My collaborator was asked by one of his third year undergraduates if she could pursue a rather strange final project - that she inseminate one of her own eggs with chimp sperm and carry that creature to term, in her own womb.  It started at this little group lecture that EST/Sloan gave as a way to inspire playwrights about science.  And Lee Silver, the scientist and professor in question, told this story (among others).  Afterward I screamed at him "THAT'S YOUR PLAY."  And we became fast friends.  We proposed to Sloan the very play that won the Guthrie competition, and the late, missed Curt Demptster kind of flipped for it.  The people who didn't flip for it were the Sloanies.  One of the people close to the situation told me that the Sloan scientists were actually offended and that our play was anti-science.  Well, then I knew we had something, so I sent it for other grants, first and greatest among them was the Guthrie/Playwrights Center Two-Headed Challenge grant, which offered 10k for a team consisting of a playwright and a non-theater person.  Lee and I applied and won with this Oleanna-esque play about identity as a sex and as a species.
Q:  What was your time at the Inge Center like?  My wife was there this past year and she had a great time.

A:  I loved it.  Peter Ellenstein is one of the most supportive people in the business, and the community really enjoys our presence.  It's a part of America theater people rarely see - the Red part.  I was actually in something of a free speech controversy there, where the Principal of the high school was miffed that I had a blog and that I used some frank language on that blog.  I was careful while I was there to not mention the blog to my high school class for just such a reason but another teacher had to go and open his/her big fat mo--- oh, it was a lot of fun, actually.  I learned I enjoyed being on the front page of a daily paper making obnoxious comments.   I was there with Carson Becker, from Chicago originally, and I'm so glad I met her - she's one of the people who make me feel better just thinking about her.  I hope she reads this; it's been forever.
Q:  You are Republican.  What's that about?  The reason I've always thought there weren't many Republican playwrights is that as a playwright our job is to see the world through other people's eyes and sympathize with them and in my opinion the defining characteristic of a Republican is the inability to do that.  Would you care to comment?

A:  Adam, you make me laugh.  So you can sympathize with all people except the nearly 50% who vote Republican?  I'm a big "get out of my life" kind of guy when it comes to the government, so I guess that makes me more libertarian than Republican, but I don't own a gun or a bong, so I feel out of place at those cocktail parties.  Some people think it's because I'm just a contrarian, and since I live in NYC there are more liberals for me to argue with.  I suppose there's some truth to that.

It's not an easy time to be a Republican, I know, but I certainly don't see the Democratic Party offering better ideas at the moment.  They seem marginally worse - continuing the same freedom-bashing as the Bush administration while spending an extra 10 *trillion* dollars.  No, I'm not really what one would call "pro-life" but sure I think the state has some say in life-or-death definitions, if not decisions.  And I'm certainly pro-gay-marriage since I value marriage - so why shouldn't everyone benefit from it?  To me the best institutions are the small ones, and I can think of no better institution than the buddy system.  Sure, it's as flawed as people are, but it's certainly better than being alone.  And there's no intelligent reason for denying those benefits to committed gay couples.

Sure, our party has its problems with morons that think that, say, a ghost invented all of mankind 6,000 years ago, but liberals have this moronic ideal that all men and women ARE equal, not that they're created equally under the law.  And what we're learning about genetics and evolution is proving that this just isn't so - that men and women are different, that people have different intelligences, different susceptibilities to disease, different values of human life.  And to me any dogmatic person can't imagine that people would think differently from they, liberal or conservative.
Q:  Can you talk about your day job?  Is it fun?

A:  I have a few day jobs, one of which thank God is writing.  The others are a lot of fun - I teach writing at NYU and I'm the entire research team for Inside the Actors Studio.  The third day job is the toughest and most rewarding - being a dad.  As the artist in the family I'm the primary caregiver for the kids, so that means I'm making the breakfast and dinner and getting the kids and the wife off to work and school, respectively.
Q:  Tell me a story from your childhood that explains who you are as a writer or as a person.

A:  Ooh.  Toughy.  I remember my parents yelling at me about something, when I was about four, and I screamed back "check your calendar!" They were kind of taken aback and asked why? "It's be kind to childrens' day!" They laughed and the trouble was over.  It was my first improv.  And my first acting gig. And my first writing gig.  And it got me off the hook.  The soft, funny answer turneth away wrath.

Then there was this other time - my father, an attorney, was furious at me (hm. trend.) and he demanded I write him a letter of apology.  I gave him one that explained my side of the story, and he sent it back corrected with red marks and I couldn't leave my room until I did it right.  I learned that I could honestly write fiction, the fiction that I was contrite, and I learned that I would never be censored again.
Q:  What kind of theater excites you?

A:  The kind that plays with the form of theater - How I Learned to Drive was a spectacular way to tell a story, taking advantage of how suggestible an audience can be.  What a thrill ride. And I have a special fondness for Ayckbourn and Stoppard.  They lull you into this middle-class sense of comfort only to rip the rug out from under you.  Dinner with Friends did that... polite and sweet and then - wham!  Chekhov does that well, too.  But I guess that's not very experimental - oh, I just love good shit.

I'll tell you what doesn't excite me - I'm sick of seeing TV After-School-Special theater - you see it on Broadway lately.  Yes, great, you're a minority - or you've been abused - or you're a disabused hippy -  and you've finally made it, or you finally got the respect you deserve, or you got killed by a cold, soulless society, but jeez, isn't there a way to tell the story that's not this vanilla upper-middle class naturalistic scene after naturalistic scene and exclamation of theme at the end?

The internet is changing the way we think.  Biology is changing the way we're BORN.  And we're stuck doing Free to be You and Me and calling it "powerful."  I shouldn't be seeing pledge drives or commercials in the darkness when the scenery is being changed.  And it's especially ironic when I see such amazing TV these days, done by playwrights.  I watch the Wire, and Hung and Friday Night Lights and wonder why and how these giant corporations are taking these chances on amazing playwrights and producers in NY keep producing the Royal Family.
Q:  What advice do you have for playwrights just starting out?

A:  Prepare to be starting out for 25 years.  You never stop just starting out.  And prepare to have homework for the rest of your lives.
Q:  Plug for your two headed play and any other plugs?
A:  Yes!  This coming July the great literary director (and the great director) Michael Bigelow Dixon is directing The Sweet Sweet Motherhood (the two-headed challenge play) at Here! It stars this amazing new actress who did the piece in Minneapolis, and I think I have a pretty amazing dude as the other actor.