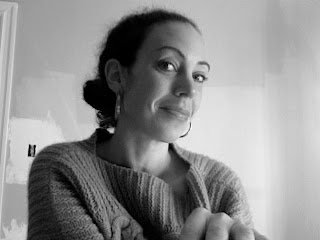 Hometown:  I grew up in Minneapolis.

Current Town:  I just moved back to New York after grad school. New York--Brooklyn specifically--feels like home these days.

Q:  Tell me please about your show coming up at Lincoln Center.

A:  It's the story of a novelist trying to get her book published but it happens to be set in a futuristic world with all sorts of deception and political intrigue. The protagonist, Macy, ultimately makes a kind of "Faustian bargain" to publish her book and we see the implications of her choice ripple throughout an entire society. Also, just for kicks, there are no men in the play. (Adding a little twist on pregnancy and reproduction...)

A:  It's hard to narrow it down. Ken is a total delight in every sense of the word. He thinks very intuitively and sensitively in the moment. When a question comes up, he takes the time to search for the deepest, richest and most interesting answer possible. His eye for design and an elegant stage picture is also totally inspiring. I could go on and on...Clearly, I'm a big fan.

A:  I'm working on some pieces that I started at Brown and I'm in the process of finishing some early drafts of commissions. I am also working on a non-fiction book that is set to come out with Random House later in 2010.

A:  I loved it. I came from New York where I was scrambling to make money and do my work and feeling generally burnt out. Brown was playwriting heaven after that period of my life. Paula Vogel, Bonnie Metzgar and the other people in the program were like orbs of inspiration and energy. I don't think I really slept the first few days I was in class because I had such an adrenaline rush.

Q:  Tell me a story from your childhood that explains who you are as a person or a writer.

A:  Hmmm.....Once, I climbed high up in a tree with an open umbrella, convinced that my sheer powers of belief would enable me to fly. I jumped, came crashing down immediately and hurt myself very badly. I can't remember what age I was when this happened but I suspect that I was a little too old to be doing such things. On some level, this probably says something about the act of writing and my own faith in the artistic process. Perhaps, more importantly, it is solid proof that gravity exists (just in case there were any non-believers out there....)

A:  I have pretty broad tastes and interests in theater but I almost always respond to tonal dissonance. If something surprises me in its tonal shifts, I am usually hooked.

A:  There is no one set path for playwriting and everyone makes their way differently. I think the most important thing is to choose collaborators who genuinely inspire you. The rest will take care of itself...

Link to the About Face Production of What Once We Felt later this winter:
http://aboutfacetheatre.com/
Posted by Adam Szymkowicz at 10/05/2009 10:15:00 AM

One of the finest writers and human beings I know...Love her. Also, I think the play is AMAZING if anyone cares.

Oh my god, there's a lot of helpful info above!