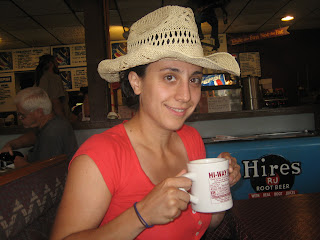 Q:  Can you tell me about your show Bottoms Up! at EST?

A:  Sure thing. Bottoms Up! started as a ten minute play that I wrote for a Youngblood Sunday Brunch back in ‘05. The short version was about an unhappy married couple stuck in a lifeboat after their cruise ship sinks. Florencia Lozano and Grant Shaud were in that first incarnation of the play and they made me totally fall in love with the characters so with some prodding from my director, Mark Armstrong, I expanded the short into a full length. The full length takes place on a cruise ship and shows how the couple ends up on that dingy. Kip (Grant’s character) is hoping that a romantic cruise will help reignite the passion in his marriage but his wife, Dee (Flo’s character) is just not having it. She’s on the cruise to get a tan and drink pina coladas and is in total denial that there’s anything wrong with their relationship. Then they meet this older couple, Phil and Loraine, who want to help them out and craziness ensues. It’s the closest I think I’ll ever get to writing a “sex farce.” The play is supposed to be funny so hopefully people will laugh on Sunday.


A:  I’m working on a newish draft of my play Total Power Exchange in prep for a reading at New York Theatre Workshop on November 23rd. I’ve been developing that play for seemingly ever with Victor Maog. It’s about sex slavery and the internet and all sorts of other ghastly things. I’ve also been writing a lot of short fiction lately and I’m busy at work on a TV pilot, which is something new for me. I’m very excited about that.

A:  Absolutely! The 24Seven Lab is a developmental workshop that I co-run with Sharon Freedman and Sarah Hayon. We’ve been in business since 2004 and we just started our tenth workshop round, which we think is very cool. We try to hold two workshop rounds per year and we bring in four playwrights per round to work on VERY new pieces. A lot of the time, playwrights will come to us with an idea and say, “I don’t know if this is anything but I’d like to give it a shot.” We meet every week for three hours with the writers and a small group of actors and two dramaturges. We’ve been very fortunate to work with some exceptional playwrights like you(!), Zayd Dohrn, Annie Baker, Lucy Thurber, Tom Diggs, Lucas Hnath, Sam Marks and the list goes on and on and on. The fellows this session are Chad Beckim, Melissa Ross, Sam Hunter and Jessica Kahler. We’re starting the grant writing process right now, which is daunting but exciting and we’re expanding our programming constantly. Last year we held our first ever 5-day writing retreat and we’re doing it again this spring. Our website is severely in need of updating but people can feel free to check us out at www.24sevenlab.com.

Q:  I'd love to hear about your boxing.  What do you like about it?  How has it changed you?

A:  For full disclosure, I should mention that I’ve been out of the gym for a little over a year now. I miss boxing all the time and all of my amazing team mates who are still out there kicking ass and taking names. I boxed for about six years with Lee Shabaka’s Team Freeform Women’s Boxing Club. If you’re in the know when it comes to the New York (and national) amateur boxing scene, you know Lee and his girls. I started training with Lee for fitness and it took a while for me to decide I wanted to compete but ultimately, it felt like a natural progression—you start on the bag, then you spar, then you compete. Although most folks are happy to stop with the sparring! I’m naturally pretty competitive and strong of mind and body, but it’s easy to feel tough and invincible when you’re just training—things change when the fight is a reality and you’re standing in that box staring down some chick who’s sole intention is to beat you senseless. I was always really good with the physical stuff, always a very technical fighter but at the end of the day, I wasn’t really out for blood and if you’re not out for blood, you don’t win fights. That’s not to say I didn’t win my share of fights, but I’m not a natural-born killer and ultimately, I didn’t want to get hit anymore. But I am so glad to have had the experience and I will always be proud of what I accomplished. Boxing definitely made me tougher, stronger, and more of a “finisher.” For now though, I’m happy with my regular Bikram yoga practice and have been enjoying the benefits of Bikram Yoga NYC’s workstudy program since last spring.

Q:  Tell me a story from your childhood that explains who you are as a writer or as a person.


A:  Oh wow. I’m writing all of this sitting at a desk in my childhood bedroom, which my mom is in the process of converting into her office and I’m listening to all the sounds of the neighborhood and realizing that all of my work has probably been informed (to some extent) from growing up on the first floor of a pre-war building on the Upper West Side. I’ve always written and I’ve always wanted to be involved with theatre. It’s just been “it” for me since I was little little. I guess--going off on that a bit--that I will never forget this travelling Shakespeare troupe that used to do shows in the Westside Community Garden on 88th Street and how they came through once when I was like three or four and did some bizarre Shakespeare mash-up, which included one of their actors stabbing himself repeatedly in the chest with a plunger. I just thought that was the best thing I’d ever seen. Sorta the dictionary definition of “theatricality.”


A:  Hmm…refer to previous question! It’s going to sound lame but I like theatre to be not boring. I’m not really into anything that is “subtly beautiful” or “quietly disconcerting.” The last play I saw that made me sit up and think, “Damn, that’s interesting” was Thomas Bradshaw’s “The Bereaved.” And it wasn’t just cuz PCP produced it! When you see a lot of theatre and read a lot of plays and have written a lot of plays and have taught playwriting and have gone to millions of readings and sat through trillions of workshops, at the end of the day you’re just like, “please don’t put me to sleep.”

A:  Always be writing. That’s the obvious one. Get jobs that are not theatre-related. Even if you’re one of the lucky few who doesn’t have to work, you should still work. Every experience is an experience to draw on when you write. Also, be cool. Be the kind of person that other people want to work with. There’s a time and place for ego and it’s generally when you’re accepting your Tony, Pulitzer or Oscar. All other times, be humble but don’t be a push-over. Stay true to your voice and vision and don’t let anyone railroad you into make cuts or changes you don’t think serve your play. Oh, and make friends with directors who get you and your work—they will serve you well and be a shoulder to cry on when you’re feeling down about your new play that no theatre will touch.

Q:  Plug for Bottoms Up and any other plugs:


A:  Please come see my reading of Bottom’s Up! this Sunday November 8th at EST. 549 West 52nd Street, 2nd Floor. It features an all-star cast including Grant Shaud, Florencia Lozano, Peter O’Connor, Erin Darke and Polly Adams and is directed by the awesome Mark Armstrong. For reservations: 212. 247.4982

Also, if you want to learn more about The 24Seven Lab, please email us at literary@24sevenlab.com or check out our weird little website at www.24sevenlab.com. If anyone wants to give us money, they can and should visit our donations page on Fractured Atlas: https://www.fracturedatlas.org/site/contribute/donate/354

somehow I managed to forget that the Westside Community Garden is bwteen 89th and 90th, and not on 88th street--as I said in the interview. I'm correcting this hear because if my mom reads this, she will no doubt rip me a new one for making that mistake.