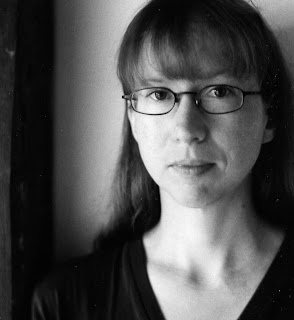 A:  I just finished/am still tweaking a play I started by accident at an Erik Ehn silent retreat this summer.  It's set in Berkeley in 1981, and is about a Sci Fi writer.  I'm also working on an extremely long play about Nero and a play for the Civilians about people telling Simpsons stories.

A:  We implode.  We felt that if we continued we'd become an institution and that all our native strength lay in not being one.  Also, in an odd way, 13P is not so much about the specific playwrights involved as it is about the gesture of producing; if we went over again or brought in a new batch it would change the tenor of the thing.

Q:  The Internationalist is one of my favorite plays of all time.  I saw it three times:  The first show in NYC, the one in CT and the Vineyard.  Are there any productions coming up that you know of or if not where can people buy it and read it?

A:  You rock, Adam.  People can get it from Playscripts, or there's a different edition which is available online through Amazon, or it's also  in the April 2007 American Theater.

Q:  Tell me a story from your childhood that explains who you are as a writer or as a person.

A:  I have a lot of vivid earthquake memories...

A:  Right now I'm most interested in theater which is supersaturated, or deceptively simple.

A:  Write the play you think no one but you will like.

A:  I have an translation/adaptation (really a translation with liberties) of Euripides' great lunatic play ORESTES which is going up at the Folger in DC in February and will move to Two River in New Jersey in March.

Some shows coming up which I'm really interested to see:  THIS by Melissa Gibson at Playwrights, the next 13P show: AMERICAN TREASURE by Julia Jarco, LAST CARGO CULT by Mike Daisey at the Public, CRIME AND EMERGENCY by Sibyl Kempson at Here, AUNT LEAF by Barb Wiechmann at Here, David Greenspan's THE MYOPIA at The Foundry, Young Jean Lee's KING LEAR at Soho Rep, TERRIBLE THINGS by Lisa D'Amour and Katie Pearl at PS122.
Posted by Adam Szymkowicz at 11/21/2009 06:38:00 PM

From dollars to donuts, I betcha she's writing about Philip K. Dick. There are still writers out there who remember him (such as Tim Powers), or at least remember the Berkeley SF scene back then.