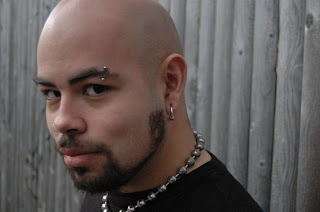 Hometown:  Born in Radford, VA; raised in Halifax County, VA; my hometown of Clover is now an unincorporated township, so South Boston, VA is the closest approximation to hometown.

A:  At the moment I'm preparing for two upcoming productions. My play Learn To Be Latina will premiere with Impact Theatre in Berkeley in February 2010  (read about it here: http://www.impacttheatre.com/season/0910/ltbl.php) and then in June  Forever Never Comes
goes up with Crowded Fire here in San Francisco  (see http://www.crowdedfire.org/inDevelopment.html#FNC). Rewrites, rewrites, rewrites! When I need a break from those, I go back to work on First Person Singular, my first non-theatrical text. It's a collection of prose poems about a man who returns to San Francisco to figure out how and why his relationship failed and discovers along the way that sometimes things fall apart for all the right reasons.

Q:  What theater companies or shows should I check out when in SF?

A:  There is a lot of great work being done in the Bay Area.  Berkeley Rep and The Magic are great, of course, but there are lots of smaller gems that do truly outstanding work. I'm a huge fan of Crowded Fire Theater Company, Cuttingball Theater, Encore Theater Company, Campo Santo, Impact Theatre, Shotgun Players, and Killing My Lobster. The Jewish Theater of San Francisco, Z Space Studios, Aurora Theatre Company, and SF Playhouse are pretty wonderful, too. The performance series at Yerba Buena Center for the Arts never fails to deliver something exciting.

A:  After a battery of intelligence tests when I was in second grade,  my parents were encouraged to place me in a school that had a gifted program. Thus began the daily 20+mile commute to Halifax County Elementary School. I didn't know anyone at all there and I was a shy, awkward kid, so making friends didn't come easily. A boy in my class invited me over for his birthday sleepover and I remember looking forward to it and the possibility of new friends. The whole thing turned out to be a disaster. There were all these expectations to play basketball and football, neither of which I was good at. To make matters worse, I brought my Gizmo toy (remember? From Gremlins?) to play/sleep with, which TOTALLY sent them over the edge. The sleepover turned into this seemingly endless taunting session where I got pushed around and called names like sissy and fag. One of them jokingly said "Are you sure you're not a girl?" and everyone began to laugh. Three things became clear at this moment: 1) There was an expectation of behavior that defined "boy" and by default (through non-fulfillment of those expectations) defined "girl"  2) that "girl" was somehow less than "boy" and 3) by not fulfilling expectations of being a boy, I would be called a fag.  Of course I didn't have that language for it at the time--I wasn't rocking out the queer and feminist theory at the time-- but that's the best translation of that awareness in retrospect. It was a profound moment of realization that there were predefined roles expected of people and that these roles had rules. I've been fascinated with gender and the social expectations of gendered behavior ever since, which is something I keep exploring in my writing.

Q:  What is it like to grow up in rural Virginia as a Latino/radical queer socialist?

It's funny, because I don't think I grew up any of those things, but rather grew into those identities. In terms of class, I have an odd history of being both of privilege and then suddenly being extremely poor. That sudden shift also marked the transition between elementary school and junior high. I went from being comfortably middle-class to being on the free/reduced lunch program. It's an awkward age in which change is palpable. It reverberates throughout my senses to this day.  The suddenness of that class shift burns that awkwardness into memory.

I grew up in an area where race was defined in terms of white and black. Looking back, it's fascinating to see how I navigated myself socially as a function of being in this seemingly undefined space. The school cafeterias were always the most self-segregated spaces along lines of race and class, and I was able to sit at either a black table or a white table without it being a question. At the time, there wasn't a large number of latinos in the area. That combined with the fact that my sisters and I spoke perfect English allowed for an amount of privilege. Ostensibly, we weren't white but the fact that we weren't black meant that we were afforded privileges of whiteness. Aside from migrant workers coming in for the summer, there wasn't a large latino presence. There was my family, which is Colombian, a Puerto Rican family, a Chicano family, and a Cuban family, and I don't recall our families ever really interacting. What I do recall is going to Colombia for the first time in 9th grade for six weeks and coming back with this realization of a cultural heritage that was incidental at best up until that point, as well as an awareness of myself as "other."

I knew that I liked guys from the age of 4, but I didn't come out to anyone until my senior year, and even then it was only to a small group of friends who all turned out to be queer anyway. It wasn't until attending The College of William and Mary (*shudder*) that I faced direct homophobia. I decided to be completely out from day one, and pretty soon I had a knife in my door. That sort of set the tone of what was to come:  slashed tires, bottles thrown at my head at frat parties (thankfully drunk people have bad aim), things being thrown at my car windshield while I was driving, being harassed by total closet cases (one of whom now lives in SF and cruised me at Gold's Gym earlier this year before I gave him a reminder of our history) and being told by campus administration that if I wasn't "so loud about it" that things like that wouldn't happen. That coupled with the overt racism I faced, both from students and faculty, made me seek out something that could help me explain what the hell was going on, why I felt like I didn't seem to fit anywhere. That search led me to taking a couple of writing workshops with Lois Weaver (of Split Britches Theater Company) who was in residence for a semester, and those workshops gave me a space to honestly and openly explore issues of race, class, gender, and sexuality. Those workshops left me wanting to read more about feminism, queerness, and race, so I began to take more classes that allowed me to learn more and ultimately give me the pieces of the puzzle that explained why my experience of the world was so different from everyone else around me. If anything is to blame, it's theatre. Theatre introduced me to feminism, which introduced me to queer theory, Marxism, and critical race theory. I went to college an apolitical aspiring paleontologist and left imagining myself to be the bastard child of Che Guevara and Oscar Wilde with Gloria Anzaldua as my spiritual grandmother. Wouldn't that be a fabulous lineage?

Q:  Why are you looking at me like that?

Q:  What is the purpose of theater?

A:  I believe theatre is a powerful space for people to gather together and collectively witness stories that make us laugh or cry or in some way move us, provoke us to think. It is a space for us to gather and see that through all our differences there is the possibility of connection. We see this through our identification with character, with story, and with each other as audience members as we bear witness together to the events that unfold on stage. Aesthetics is politics and nowhere is this more powerfully felt than in the liveness of theatre. Theatre historically has been a tool that shapes and reinforces ideologies about race, gender, class, power, and the state. As artists we can create a theatre that reinforces the social norms that keep us divided or we can use the same tools to critique the structures that shape us and bring us to a shared recognition of our common humanity so that we can move forward. I choose the latter.

Q:  What advice do you have for a playwright just starting out?

A:  There's over two thousand years of theatrical history---take the time and familiarize yourself with the breadth of it (experimental theatre began with Euripedes). Read lots of plays. Go see lots of plays. Identify what it is you like/don't like and why. Try to arrive at a definition of your aesthetic, but allow it room to breathe and shift. Find the theatres that match your aesthetic and develop relationships with them (a good start is by seeing their productions). Practice transcribing real conversations, study linguistics, and bury yourself in poetry. Listen to music. Language is more than words, it is rhythm, melody. It has consonance and dissonance. Be fully aware of the potential (and limits) of language. Draw. Paint. Take pictures. Look at art, really look at images and composition. You create the play world on the page, and how you write the play can affect the visual translation. Don't be afraid to think imagistically, but don't direct on the page. Watch tv and film, but be aware of how theatre is different. Be nerdy about something. Anything. Be generous of spirit, of knowledge, of self. There's little money to be made in theatre, so why turn this into a competitive sport? Be happy for your friends' successes. Their success can lead to your own. Take time off before gradschool. An MFA for the sake of an MFA is not a reason to get an MFA, and it most certainly is not worth going massively into debt. Write what you know. Write what you don't know. Write from your heart. Write from your gut. Try not to write from your head. Write what you want to see, not what you think they want to see. Write about what most matters to you. Write. Write. Write. Push yourself beyond your comfort zone. Try something new in each play. Be ambitious. Don't be afraid to ask difficult questions or travel difficult terrain. Don't be afraid to fail big! Give audiences credit--they're smarter than theatres would have you believe. Not everyone is going to like your work. Not everyone should like your work. If you're not pissing someone off with your writing, you're doing something wrong. Learn all the rules of playwriting--and then fucking break them all. Above all else, have fun. Otherwise why bother?

A:  I've got a big year ahead! Learn To Be Latina in February with Impact Theatre and Forever Never Comes in June  with Crowded Fire. Visit their websites and sign up for their e-mail list.

If you want to be on my e-mail list, drop me a line at enriqueuruetaplays at gmail.com. Hope to see you in the audience!