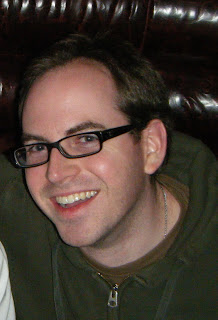 Q:  What originally got you into writing plays?

A:  I was an actor for years and then in college when I started writing, I started writing plays. I got addicted to theater but found acting scary and unsatisfying, so writing for theater seemed like a good idea.  It still does, sometimes.  I don’t feel the urge to act except when I see an actor not doing something as well as I know I could.  That happens less these days.  Most actors are better than me.

Q:  You’re also a graduate of Columbia and Juilliard.  Have you noticed an effect, positive or negative, on having post-graduate degrees with your writing and/or career?

Negative includes 88 thou or so of debilitating debt from Columbia.  Positive includes that I wrote a lot of plays during my years in grad school.  In addition, Juilliard has definitely helped me a great deal careerwise, although I'm still not yet where I want to be.

A:  I signed a three page confidentiality agreement so I’m not sure what I can actually say about the show.  What I can tell you probably, without getting in trouble, is that on an average network show, you write 22 episodes over 9 months.  On a cable show (like HBO or Showtime) they write 12 or 13 episodes over 5 months.  On the show I was writing for, we wrote 46 episodes in 5 months.  We were taping three shows a week and once we started taping there was no break.  It was exhausting.

A:  Keep in mind, I only wrote for this one atypical show.  But... it’s sort of like writing in a different but similar language.  The expectations are different.  What is considered good is different. It has also made me appreciate what can be done with 6 minds working on something as opposed to one mind.  At the same time that the voice can be diluted, other things get sharper.  It’s why some sitcoms are so funny.  In theory, you’re using the funniest joke that the room can come up with.

A:  They’re different.  In this case, this show is vastly different from what I normally write if for no other reason than I’m a white kid from small town Connecticut and it’s about African Americans in Atlanta.  But there are other reasons too.  The 30 min format (24 min really)  is vastly different.  The structure is different.  You have to think about what your act break is and how to end each scene.  A scene is this many pages generally and there are this many of them.  It’s more like being a mechanic in some ways.  There is a lot of problem solving.  Some of the things I know how to do from playwriting are useless in the writing room and some of them are very helpful.

Q:   You’ve been pretty tenacious about getting your plays produced regionally.  You had five plays of yours staged around the country in 2009 alone (that’s not including the staged readings or having two plays published this year).  Although you covered this a bit in the comments section of one of your blog entries, can you give a little more detail about how you go about getting your work staged so frequently?

A:  In 2009, I had 8 full length plays produced and one play published.  At this point, I don’t send out as many plays as I used to.  I do still email theaters sometimes to promote my published plays but I’m not sure how much that helps.  My agent is sending out my new plays.  I need to start doing more of that myself.  I’ve been working 12-15 hour days the past 5 months so a lot of things I would submit to normally got by me this year.

But advice-wise, playwrights need to get their stuff out there and up on a stage.  Do whatever you have to to get your plays out there.  Send to as many places as you can.  Give your plays to directors and actors you like.  If it's not working, put the play up yourself and repeat.  And repeat.

Q:  Although you have relationships with different companies, you don’t have your own theatre company.  What are the pros and cons of being a “free agent,” so to speak?

A:  I don’t like being a free agent.  It means I have to work harder to get people to put my plays up.  I have to show them to more people. I do have some great relationships but yeah, I wish I had my own theater.  On the other hand, I would probably be working a lot harder if I were producing my own plays.  Ideally, some theater would adopt me and produce every new play I write, preferably an off Broadway or large regional theater.

Q:   I’ll now go to one question you’ve asked all of your interview subjects: what type of theatre excites you?

Q:    Let’s do another one of your old standards: what advice do you have for a playwright just starting out?

A:  I wrote a long post about that once.  You can find it here:

A:  I have a couple readings coming up in January and 2 or 3 productions that I know of in March.  I have a couple films I want to write, a pilot or two I’m working on and a whole list of plays I plan to write.  Oh, and a couple novels I’ve been working on.  I just have to figure out when I can do all the things I want to do.

Hi Adam - really enjoy your posts, especially the I Interview Playwrights. Thanks for posting all these amazing conversations, it's a very generous thing for you to do. All best to you for the holidays and New Year!

Hey Adam, I love your answer to what kind of theatre excites you. I definitely agree. When I look back over the plays I've seen the past few years, the ones I've loved have memorable characters and a strong story. Too many plays try too hard to be "relevant" and end up being irrelevant.