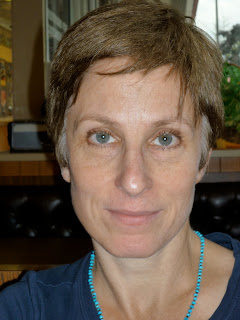 Q:  Tell me about the play you have coming up at Humana.

A: It’s called Ground. It was originally commissioned and developed at Chicago’s Northlight Theatre. The play looks at issues of disrupted family and community in a small town at the U.S.-Mexico border in southernmost New Mexico. The play’s characters include, among others, a border patrolman and a leading member of a citizen-run border surveillance group, but essentially it’s a story about a once cohesive community—and the families within it—that has been fractured by changes in U.S. immigration policy.

A:   I’m writing a play about two people who lose their jobs and are forced to reshape their lives when the economy tanks. They each take a very different path to climbing back into the workforce and creating some version of a Plan B. One becomes a full-time guinea pig for pharmaceutical trials; the other starts selling sex toys on commission. Their stories become intertwined as the play examines what it takes to re-envision the future in the face of total uncertainty.

I’m also in the early stages of a play about women and war, which  I’m writing with my longtime collaborators at Chicago’s Rivendell Theatre Ensemble.

Q:  If I went to Chicago tomorrow, what shows or theaters would you suggest I check out?

A:  Well, you’d be in luck because Tina Landau’s production of Tarell Alvin McCraney’s BROTHER/SISTER PLAYS is starting previews at Steppenwolf. There’s also a brilliant production of THE PILLOWMAN running right now at the tiny Red Twist Theatre, directed by Kimberly Senior, where the audience sits pretty much inside the action. It’s terrifying and hugely compelling. As a general rule of thumb, I’d also recommend just about anything at A Red Orchid Theatre and Timeline Theatre Company.

A:  When I was thirteen, my family moved to Oaxaca, Mexico, for a year. I was a sullen, hormonal mess of newly minted teenagerness at the time; I missed my friends back home, and I was keenly aware of being an outsider (complete with very blond hair and lots of pimples) in this foreign place. My sister and I took classes at a local school, and my parents also home-schooled us in the areas of their particular expertise--visual art and creative writing. As part of the home curriculum, we had a three-hour writing class three times a week with my stepfather, Ken Macrorie, who was a longtime professor of creative writing. I’d been writing stories on my own for several years by that point, but up until that class my writing tended to reflect (or, more accurately, shamelessly imitate) whatever authors I was reading at the time. Ken was a great teacher—incredibly supportive and enthusiastic—and he never shied away from pointing out when we were ladling on the bullshit or dodging around honesty into trite phrases and soupy sentimentality. He loved words, and he was rigorous about emotional truth. During these intensives around the dining room table of our apartment at 13 Calle M. Bravo, all the work was read aloud. Hearing my stories spoken, something shifted in me. I began writing pieces almost completely based in dialogue. And it was as if a whole new creative universe opened up. The thrill of hearing my characters speak. I was so excited by that—I couldn’t get enough. I began to write the world as I saw and heard it, creating fictionalized worlds full of things I really believed, questioned, found hilarious. I felt so powerful! And all of a sudden I was really there—all of me, not just the displaced kid of me—in this amazing city in this fascinating country, exploring and meeting new people who were like and unlike me, and finding out about things I’d never experienced or thought about before. And writing it all down. In dialogue.

A:   I’m drawn to work with strong characters and a strong narrative drive, no matter what shape that narrative might take. I tend to like work that assumes the audience is smart enough to fill in a few blanks. I’ve inherited my stepfather’s aversion to soupy emotionalism, but I’m always looking to be moved by what I see in the theatre.

A:  Do whatever it takes to find your tribe.
Stay open, keep learning.
Be generous with your colleagues.
Cultivate enthusiasm.
Be patient.