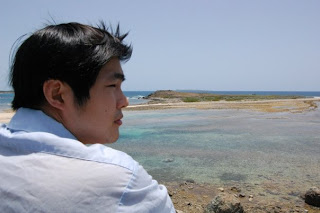 Q:  Tell me about microcrisis.

A:  microcrisis is a play about the next financial crisis. It's about what happens when bankers exploit microcredit, the small charitable loans to Third World entrepreneurs meant to alleviate global poverty. It's about bankers lumping microcredit into complex financial instruments that ravage the international economy. It's also a bonkers comedy. Stylistically, I'm trying to reconcile the wacky, senseless style of my short plays with the more serious intent of my full-lengths. I'm hoping to take the sensibilities I've honed in my shorts and use comedy as a weapon. I've also been thinking for the past several years about how to write an effective political play - how to do theater that reflects what's going on in the world without falling into the usual traps of preaching to the choir, defanging the truth, or making "expendable art" that's ripped from the headlines but forgotten tomorrow.

A:  microcrisis has been occupying most of my brain space lately. This is a workshop production, so I've been rewriting throughout the process. But after this ends I'm hoping to start up a new play for a couple of actresses that I like, and collaborate on a new musical with former Youngblooder Matt Schatz.

Q:  Tell us about Youngblood. Who are they what do they do, etc.

A:  Youngblood is an incredible incubator of emerging talent, housed at Ensemble Studio Theatre. It's a writers' group for playwrights under 30. We meet weekly to go over drafts in progress, do workshops like the one microcrisis is getting, produce a ton of short plays, go on artist retreats, and we do a monthly Sunday brunch series where the audience watches a series of new short plays all written on the same topic (while eating pancakes and drinking Bloody Marys). Youngblood and the Ma-Yi Writers' Lab have been my greatest fronts of support over the past several years as I continue trudging through emerging writer hell.

Q:  You had a short in Humana. What was that experience like?

A:  Yeah, I had a short last year (Roanoke, about re-enactors at the Roanoke Living Museum) and the year before that (In Paris You Will Find Many Baguettes But Only One True Love, about a sad sack and her best girlfriend who falls in love with a Parisian street mime). Both of those shorts actually got their start in Youngblood and premiered at Humana. Being at Actors Theatre of Louisville was incredible. The theaters there are so gorgeous, and the support system is astounding. To see these ridiculous plays getting fully produced was joyful and a little surreal. For instance, Roanoke had a huge teepee and an arrowhead display as part of the set, and one of the girls wore a breakaway skirt that she shed for the final dance number (which Matt Schatz composed). When Roanoke was first done at Youngblood, there was no set and I think the actors had to hunt through their closets for costumes. The Humana Festival itself is also quite fascinating. The plays themselves are really solid, but I'm also interested in how the machine of it works: the way the apprentice company does round the clock set changeovers to cram 10 different shows into 3 theater spaces. Or the way the entire theatre industry descends onto Louisville. It was really interesting being a gnome among giants and watching this whirlwind of drama onstage and off.

A:  I am engaged to Rehana Mirza, whom I met in the Ma-Yi Writers' Lab. What's funny is that we want to accomplish VERY different things in our writing and yet we have a profound respect for the other person's work and a deep understanding of their writing mechanics. Oftentimes we'll suggest edits or lines that are absolutely in the other person's voice -- things that we'd never dream of putting into our own writing. I think the biggest advantage of being a playwright couple is always having an advocate - someone who knows your work inside and out and who's always willing to engage with you and keep pushing you to get better as a writer. I think another major advantage is an innate understanding of the difficulty of this career path. We're able to celebrate the small victories together and weather the many challenges. For instance, this is the second year in a row that I've been in rehearsal over Valentine's Day. Rehana didn't even blink. She gets that when we're in production it's a rare and lucky moment, and so what might seem like an obstacle or an inconvenience to anyone else is actually a cause for celebration to us.

A:  As I said early, lately I've been hunting for plays that attack the political world in a way that's nuanced, honest, and longlasting. I also like plays that transport me to other worlds, either through the language or through the writer's unique logic. I love plays with a good sense of humor. My favorite writers are Steve Belber, David Lindsay-Abiare, Julia Cho, Julia Jordan, Lloyd Suh, Qui Nguyen, and my fiancee Rehana. My favorite productions over the past few seasons have been Passing Strange, Blasted, and Princes of Waco (by fellow Youngblooder Rob Askins). I'll tell you what really excites me: plays that reflect our multicultural world and that depict a unique perspective. So often I see plays that portray the same kinds of people, that offer the same viewpoint, and that speak to the same kind of audience. It's as though year in and year out the titles change but I'm seeing the exact same play over and over again. I think that if this art form is going to be viable against other forms, we need to mount work that is vital and immediate. We need storytelling done in a form that's unavailable anywhere else. But above all, we need to hear stories from diverse artists, told from a different perspective.

A:  1) Surround yourself with a talented peer group (actors, directors, designers, and especially other writers). Talented peers will motivate you to sharpen your craft and step up to their level. 2) Learn the business side of theatre - definitely fight for what the theatre should be. But take a good, hard look at what the theatre is. 3) There's a limit to how far internships and schooling will take you. There's no shortcut for getting your hands dirty. 4) Aw, what the hell do I know about starting out, Adam? I've never even had a major full-length production. Nobody ever taught me anything that made this slog substantially easier. Some people love theatre so much that they're willing to slog on, and some people don't. It's all just an endurance game, no?

Killer interview, Adam. Lew's and your enthusiasm for raw theatre really shine through here. Also, makes me wanna trudge down to the Humana Festival. Now! (Talk about peer group...!)

My name is Mrs Sharon Sim. I live in singapore and i am a happy woman today? and i told my self that any lender that rescue my family from our poor situation, i will refer any person that is looking for loan to him, he gave me happiness to me and my family, i was in need of a loan of S$250,000.00 to start my life all over as i am a single mother with 3 kids I met this honest and GOD fearing man loan lender that help me with a loan of S$250,000.00 SG. Dollar, he is a GOD fearing man, if you are in need of loan and you will pay back the loan please contact him tell him that is Mrs Sharon, that refer you to him. contact Dr Purva Pius,via email:(urgentloan22@gmail.com) +918376918351 Thank you.