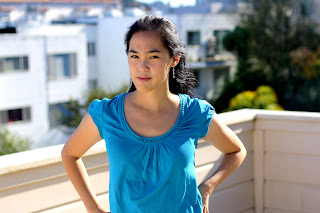 Q:  Ching Chong Chinaman is coming up at Pan Asian Rep and SIS Productions while Sleepwalkers Theater is doing The Life and Death of Joshua Zweig. Tell me about these plays. How many of these shows are you able to see?

A:  By the end of March, I will have seen all these plays! Playwriting is kind of my excuse to travel, and luckily, my UCSD spring break falls directly onto CCC's openings at SIS and Pan Asian. When I can't get out to rehearsals, it's hugely important to me that I work with directors that I trust. It also helps if I've done a little bit of development work with the director and actors before rehearsals start so I can give input into how the script is read.

A:  I'm currently finishing up Samsara, a new play on a childless American couple and their hired Indian surrogate. It delves into a fantastical world of expectations, fantasies, and motherhood. And the current draft contains pineapple sex (which makes complete sense within the play, I promise).

I'm also in rehearsals for In a Word, which is my piece in UCSD's Baldwin New Play Festival. The play deals with how one woman's world disintegrates, literally and linguistically, after her son's kidnapping. It's got a lot of fractured language and jumps in time and memory that hopefully should be messy, fun, and full of wordplay, which I love.

The Kennedy Center has commissioned me to write a couple treatments for its Heritage Project, which means I need to remember what being eight years old was like and what interested me then. I actually went back home and dug up my favorite childhood book in hopes of getting some ideas.

And once the school year ends, I'll start working on a new commission from AlterTheater, up in Northern California. It's slated to go up fall 2011, which is a real luxury, because it's pretty common for plays to be commissioned without any specific plans to produce them later on. AlterTheater is also a theater I admire for its ability to make the most of limited resources--recycled props and costumes, alternative performance spaces, and a company of really, really talented local actors. It's actually kind of intimidating, especially since they've put so much faith in me to turn out something cool.

(I would love to write a musical. Or a magic show. Just putting it out there.)

Q:  You're studying playwriting at UCSD right now. What's that like?

A:  I love my cohorts at UCSD. There are four or five playwrights in the program total (depending on the year), and my department a really good job of finding people who jive with each other. Studying with and learning from my fellow classmates has been such a huge part of my education here and is something I didn't expect at all. It's taught me to be a bit more generous as a playwright.

And our chair Naomi Iizuka is such a smart, generous writer and teacher herself. I like to think of her mind as a toolbox. She gives you various instruments with which you just might open up your play in a compelling new way.

A:  Growing up in San Francisco, I hated Chinatown. Dirty. Spitty. Crowded. Old people literally pushing you out of their way on Stockton Street. As a Chinese-American, I totally felt out of place in a place I should have felt at home in. Now I go back and I revel in the noise and trash. I'm like, "Rotten bok choy on the curb: yeah! Jam-packed 30 Stockton bus that closes the door on you: yeah!" I don't know if it's the playwright in me that wants to find some sense of authenticity, but it's an interesting change.

A:  Theater that reinvents how you tell a story on stage but still allows you to follow the story. Theater that teaches me something in a sly way.

A:  Sleep with everyone. No, really. Sleep with everyone in as responsible and reasonable a way as possible. And by sleep, I mean: meet with them, work with them, see their shows, and be a nice, reasonable, creative person. Even seemingly small opportunities can turn into larger things, and your future collaborators will come from the weirdest and most random of all places.

You'll never know where your favorite collaborators will come from. Desdemona Chiang, a director I love and seem to just happen to work with again and again, came to me via a tiny one act I wrote and she staged. No budget, etc, but five years later, we're still working together.

I once heard that it takes ten years to gain traction as a playwright, and I actually agree with that. Even if you get good fast, you still need to develop relationships with theaters, artistic directors, other artists. Being a playwright is not just about writing a good play; it's about finding a good home for your work and finding good collaborators, too.

When I was in high school, I ran a theater company, which was basically me corralling/cornering my friends into acting in my plays. We did everything and thought we were pretty cool (though VHS evidence somewhat contradicts that). But the experience really helped me see theater from a producer's/administrative perspective, and today gives me a much better appreciation for what production teams do and helps me to respect the limitations they face.

A:  ... and jesus moonwalks the mississippi by Marcus Gardley. I saw an early reading of it at cutting ball and his recent show at Shotgun Players in Berkeley, and I find it crazy that he's not done more. (March-April, San Francisco)

Lu Shen the Mad workshop at Fluid Motion by Christopher Chen. I have read/seen close to every play of his, and he is always dark, funny, and smart. (April, New York)

On the Nature of Dust by fellow UCSD playwright and soon-to-be-Seattle-based superstar writer Stephanie Timm, produced by New Century Theatre Company (May, Seattle)

Forever Never Comes by Enrique Urueta. "A psycho-Southern queer country dance tragedy." How can you not go to that? (June, San Francisco)

See? Something for every month, if you happen to be in all of those cities.