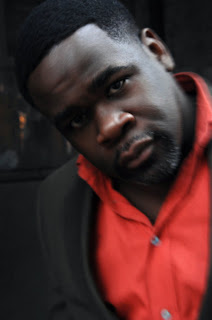 Q:  Tell me about the play you have coming up with LAB.

A:  The play is entitled Paradox of the Urban Cliche. I titled it first. Haha... I love words and putting them together so that they just sound good coming out of my mouth. It is what i love about being a rapper. Words. Language. And everything I can create with them. To be able to move the crowd. So wait, where was I? Oh my play, Paradox, yes... It is an urban No Exit basically. I am a very amateurish admirer of philosophy, particularly existentialism. It started a long time ago in catholic school and when my mother had me in church 4 days a week. Everybody seemed to just be going through the tradition motions. But that's a longer story. Paradox is born from two poems I had written some years ago. One called, In the Last Car Can't... and another called Now and Later. Sarte's existential question about essence as opposed to existence and which came first also looms over the play. Sometimes I look at paradox and I wonder if I may be trying to do too much with it since it is my first play. Is the rapper in me paying too much attention to form? Is the existentialist in me too young in his study to really answer the questions I'm posing in the play? WTF? I guess we'll see.

A:  Well, Im so ready to script lock Paradox so I can get to work on my next play, Playing the Rags. At least i think thats what I'm calling it. I've got a screenplay I'd like to get underway, a graphic novel, Vengeance of the Confident Cockroach and a memoir at some point. But before all that writing I'm contemplating doing some recording. I've got an unusual idea for a niche hip hop album and I think I'm going to do it. Hehe...

Q:  How do you find your acting informs your playwriting and vice-versa?

A:  I am a very impatient writer I think now when it comes to working with the actors. I know exactly what I want. I tend to over write their action and even structure the sentences so that the actors can't say it any other way but the way I want them to say it. It annoys the hell out of my director. I am, because of writing my first full length play, a much better actor. I appreciate the moments a lot better and can see the entire canvas of a script much clearer now.

A:  I remember being in Sunday school at about 7 or 8 and listening to the story of the garden of Eden. The teacher told us that if Adam hadn't eaten of the apple of the tree of knowlege we would be living in paradise. I got very emotional about that. I thought just because he ate the apple we were all doomed to suffering and having to make hard choices in our lives. I remember crying uncontrollably. My mother asked me what was wrong when she was taking me home. I told her and I don't really remember what was said but she dismissed me and my reasoning for being so upset. That is the type of writer I am. I believe.

A:  I'd figure out a way to make a monlogue just as exciting and mind numbing as an explosion or a pair of boobies on a movie screen. Also I'd lower ticket prices. Wait, nah....

A:  I like to go to the theater and watch a play that pushes the evelope. It tackles the topics no one wants to discuss. I hate revivals. I am very much a futurist and want to see theater remake itself for the 21st century.

A:  Write. Oh and go to a Tennessee Williams festival. and read. Everything.

Yuo hate revivals, but people should go to a Tennessee Williams festival? Hmmm.