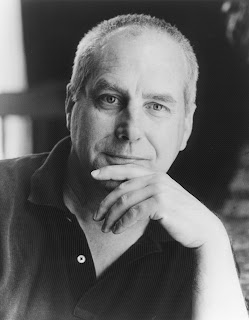 A:  When We Go Upon the Sea is a funny play about shame. It's set slightly in the future, on the night before George W. Bush goes on trial in The Hague for acts committed while he was the President. So it's speculative as well, of course. It doesn't suggest that anything like this will happen necessarily, but it helps us contemplate our own impulses to punish the man we twice elected to lead our nation. Oh--and it's a party as well. So bring your party hats.


Q:  What else are you working on?

A:   I'm working on a couple of plays. Private projects. Also a spec screenplay. Nothing I can talk about at the moment--or ever sell, probably.


Q:  You are the head of the Rutgers Grad Playwriting Program.  What can a playwright who gets into that program expect?

A:   They can expect what incoming MFA playwriting candidates generally can expect: a chance to work for three years in a concentrated way on their writing. They'll be working very directly with me, so that's something they have to know they want to do. At Mason Gross School of the Arts, they also can expect three productions in three years, the final one a full production on the Rutgers mainstage--that's a very distinctive feature of our particular program.


Q:  According to Wikipedia, you are married to Melanie Marnich.  I am also married to another playwright.  Do you have any advice for playwright couples?

A:  Don't write together. Unless you do write together. If you do happen to marry another playwright, make sure they're as astoundingly talented as Melanie. It makes life much easier. Oh, and Wikipedia? It's never wrong.
Q:  If you could change one thing about theater, what would it be?

A:   I don't think of theatrical types as heroes. I prefer to think of them as unsettling.

A:   Theatre which can genuinely make me think and feel--which is to say, theatre which most audiences find off-putting.

A:   Write a hit play that helps you get into television. Stay in television if you can. But if you must keep writing plays, write with far more ambition than your audience typically has. Write characters who are at least as smart as you are. Never have a character make a dumb decision (i.e., one that you wouldn't make) just to further your plot. Don't write passive central characters. That about covers it.