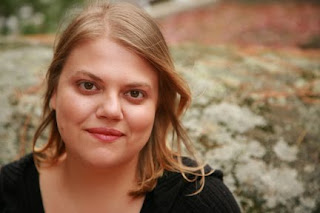 A:  An original musical with Adam Gwon called String about the three Fates from Greek mythology - a trio of women who spin, measure, and cut the threads of our lives, transplanted to a modern metropolis. Adam and I met in the Dramatists Guild Fellows in 2006. He was just starting his show Ordinary Days and I was working on my play House on Stilts. We loved each others' quirky characters. It took about three months for us to get to "let's work together" (at the Vineyard, waiting for Mary Rose to start). Collaborating on a musical is very different than solo playwriting. I've never trained in it, and it's enormously hard. Equal parts scary and great. Adam at the piano is a beautiful thing to witness. I can't wait to hear people sing it.

Q:  Tell me about your relationship with Trustus Theater.

A:  In college, I spent 70% of my life down the street at Trustus, founded by Jim and Kay Thigpen in Columbia, South Carolina. Mostly, I stage managed, which taught me tons and got me valuable after-rehearsal talks with Jim Thigpen, his war stories about plays I hadn't read yet ("Brechtian what?"). Jon Tuttle, the playwright-in-residence, called me his Assistant Literary Manager. He told me what to read and where to send my work. Trustus has a playwriting contest, and every August they bring a playwright to town for a production of a new play. Stephen Belber’s Transparency of Val was one of my favorites. When I wrote a full-length my senior year in college, I submitted it to the festival, and they said yes. So Kudzu got produced a year after I finished it, which has got to be the most ideal timeline a playwright could ask for. We had actors in the show I’d watched for years from behind my stage manager checklists. Bob Hungerford, who had played our local Roy Cohn and does all of Jon Tuttle’s shows, anchored Kudzu as my agonized Confederate Reenactor. He was a force, very generous, and exacting with his performances, which I love. We sold out every night. He was the real thing, and I was lucky as hell to work with such an actor in my first production. Looking back, it seems important that I wasn’t writing for college students in that first go. My writing grew up because of that company and that theater. I’m the literary manager now. It’s the kind of place you never leave, even if you move to Brooklyn.

A:  Dad worked for the Wall Street Journal, so I lived overseas from ages two to ten – Hong Kong, then Belgium. In Hong Kong, I had a British accent and could say useful phrases in Cantonese like “look there is a fire,” “stranger don’t touch me,” and numbers one through ten. I had white blond hair that people were always trying to touch so I developed an early scowl. We lived on a small island off the mainland where people had golf carts instead of cars. There was no Christmas, so in December, they’d put all us foreign kids on the beach, and some ex-pat journalist would dress up as Santa in a tee-shirt and row across the bay in a boat. Mom hung ornaments on a houseplant. Cassette tapes came in the mail from Grandma Lydia, who read the Three Little Pigs to me in her old Virginia accent. I would turn green whenever we got on a plane, which was often. I’m still very confused.

A: Let’s have less plays that assume the world is made of wealthy families.

A:  There are so many heroes. Paula Vogel, Jose Rivera, Naomi Iizuka, Naomi Wallace, Joan Ackerman. Their plays taught me that you didn't need furniture. Recently, I’m obsessed with Lanford Wilson and John Guare, who reminded me that furniture can be a good thing after all. I read Burn This for the first time about a year ago. It’s my new favorite play. I re-read it thirty times and watched the Circle Rep production at the Lincoln Center archives. Okay it's one naturalistic set, but he builds the play so that one set is like a centrifuge. Puts his characters through the wringer, and it's electric because of the desire and you know there won't be any shortcuts. I miss long scenes in the theater, and this play really filled a gap that I've been feeling for a while. Some of his stage directions make me weep, and they’re all about afghans and pants and the way you drink your whiskey. Then there’s Guare saying throw out the kitchen sink and so he goes and puts some colossal ornate heirloom wardrobe on the front lawn (Lake Hollywood), and it’s gorgeous and hilarious and tragic, just like the play. So I’m writing plays with furniture again.

A:  Character’s the whole reason to go to the theater. So when a writer renders something true about what it’s like to be that guy over there, and then carries it over the course of an evening, I’m sold. If the people in the story don’t grip me, then the play evaporates after I leave the theater, no matter how fluid the language or clever the structure, and I hate that. I want those characters to stay with me for days and catch me at odd moments in my own life. It’s best when you can tell that the writer loves the characters but hasn’t let them off the hook. Like Tracy Letts.

A:  a) Put time in backstage. Stage Manage or ASM. Work in the scene shop. Help focus the lights. Do the no-glory jobs and observe how the play gets made. That will teach you what the dramatic structure books leave out about theatricality, what a stage can do.

b) Stealing from Jose Rivera: “Write roles that actors you love would kill to play.” Yes!

c) Write about places that are not New York.

A:  Adam Bock's A Small Fire at Playwrights Horizons this year is going to be extraordinary. I’m also excited about Adam Gwon’s musical adaptation of the Joe Meno novel The Boy Detective Fails, which will show up on a stage one day somewhere.
Posted by Adam Szymkowicz at 7/21/2010 10:12:00 AM