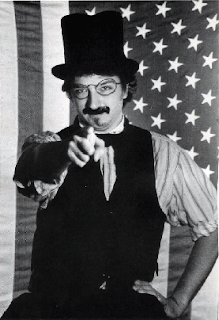 A:  I am collaborating on an opera with an extremely talented young composer named David Mallamud. It's a cross between Gilbert & Sullivan and Universal horror pictures I call The Curse of the Rat-man.

Q:  Tell me about "No Applause--Just Throw Money"

A:  It's a very personal history of vaudeville and its legacies within show business and American culture in general. It came out at the end of 2005 and required four years of very fun research. The book strives to be entertaining as it delivers information (ironically, most books on this topic just aren't). I would say 98% of its readers (including, thankfully some important critics) prize it on that basis. 2% seem to be old sticks in the mud who only believe something is serious if it's boring.

A:  When I was a very small child there was an incident where I got a lot of mirthful attention from a roomful of grown-ups by repeatedly falling on my bottom, bouncing back up, and falling down again. This was my first arena, my first applause. Most of the time I was a quiet, almost silent child. I spent most of my time alone, dreaming. But the materializing of those dreams into concrete action, even foolishness, to be shared with others in order to communicate...this was an entirely distinct phenomenon. When I write, I write for myself, but I write for the room, too. The goal ultimately is universal pleasure. This is why so many people in the theatre go insane.

A:  Something to do with the broadness of access. To over-simply, the audience for theatre continues to skew "rich", "white" and "old". When I was in school, they used to bus hundreds of us to the local regional theatre several times a year. There's far less of that now, and if anything there needs to be far more. Theatre (I think) is the one place besides houses of worship where you go and are immersed in lessons of tolerance and empathy, whether its through the play you're seeing...or the very fact of sharing space with other, live, smelly humans. It's absolutely vital to the survival of our democracy that we learn to be civil and listen to each other across all the lines that supposedly divide us. Technology is taking us drastically, horribly in the other direction and it bodes ill. Whether its funded privately or publicly I don't care, but everyone needs to be exposed to the theatre.

There's another side of the coin, of course. One is education and outreach. Kids (and nowadays plenty of adults) need to be taught to sit still for two hours and open themselves to classics. The other side is that producers need to stay in tune with the culture at large. It needs to reflect, or at least incorporate the values and concerns but above all the aesthetics of the broader (i.e., popular) culture. I think Indie theatre does a very good job of this. Off-Broadway and Broadway not so much, although they are getting better, and I am getting more and more encouraged all the time.

A:  Oh the list is so long,but here are a few: Shakespeare, Shaw, Wilde, Charles Ludlam, Joe Orton, Sam Shepard...

A:  Poetry, but it's so bloody rare. It used to be considered mandatory, now almost no one ever "goes there". Among contemporaries I like Kirk Wood Bromley. And Young Jean Lee gets very interesting, very intoxicating affects by purposefully doing things "wrong". Sometimes editors mistakenly think (because I'm a "vaudeville fan") that I'll automatically enjoy light theater, but as a general rule I hate it. I'm looking for a complex experience...laughter and tears, and with lots and lots of levels. A child should get it, but it should challenge us, too. (I might add to my "seminal theatrical experiences" a production of "Waiting for Godot" I saw at Trinity Rep when I was 13. Burlesque clown Bert Lahr had starred in it several decades before. The emotional reality was completely accessible to me at 13, and since no one EVER knows the answers to its questions, the 13 years old's experience of the play is just as valid as a philosophers. To me, that's the best kind of theatre. Light on the outside, heavy at the center. Just like a Tootsie Pop).

A:  Have rich parents and attend Yale.

A:  My next play will be produced at LaMama ETC, but that's not until March of next year. Until then, you can see me act in Ian W. Hill's Spacemen from Space at the Brick Theatre in late August, and perform some of my pop songs with some of my downtown cohorts at Dixon Place in Trav S.D.'s Last Chance Saloon, Sept 24.
Posted by Adam Szymkowicz at 8/07/2010 09:27:00 PM