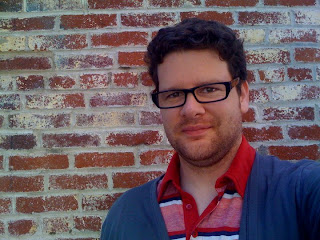 A:  This spring I finished a play titled “Underground” about a subway busker with an infatuation for the Unabomber. This play started off as an hour-long monologue almost five years ago. It has evolved into something decidedly not a monologue.

My wife, Jami Brandli (who is also a playwright), and I participated in challenge with each other during the month of August. We decided to use Facebook as a motivational tool rather than a constant distraction. We would work on a new play each day and update our status with our progress. The idea was to keep us focused on our work by proclaiming it publicly to hundreds of people. I finished a first draft of a play titled “moments before medicine” during the challenge. I’m really excited about it. It’s a two-hander about manipulation, drug addiction and abortion. Not really, but sort of.

Jami and I are also finishing a TV pilot and a couple screenplays that we’re writing together.

Q:  Tell me about Boston Court.

A:  (I think most people in the LA theatre community see me as a marketing person at Boston Court and not a playwright. I get “Oh, you’re a playwright?” a lot when it comes up.)

I feel very fortunate to be employed full time not only in a theatre, but a theatre I would pay money to visit. Boston Court focuses on new works, although not exclusively. In 2009 we did two world premieres. This year we are doing four. The plays we do are all inherently theatrical, which is something I appreciate. The theater space itself is a perfect canvas for actors, directors, designers and playwrights. I know I work here and am supposed to say this, but if you live in the LA area and DON’T come to see the plays produced here you are really missing something special.

One of the greatest benefits of working here, other than the snacks in the greenroom, is the exposure I have to so many ridiculously talented theatre people. I bend the ears of our artistic directors, directors, playwrights, actors, designers, production manager and technical director as much as I can. I squeeze as much knowledge out of them as I can. And, fortunately for me, we hire talented AND generous people who are willing to talk to me. Sometimes I pretend I’m talking to them for “marketing purposes.” Usually it’s because I’m curious.

Whether you are in the area or not, follow us on Twitter and/or Facebook and you’ll have the pleasure of reading about some of my interesting and inane shenanigans at Boston Court. I’m lucky that part of my job is to be in Facebook and Twitter all the time.

A:  When the following took place I wasn’t a child as far as age is concerned, but as you’ll see I was still a child mentally. This is a story I have told many times over the years. I feel the need to repeatedly confess…

I was in New York for work many years ago. I had just been dumped. It was snowing. I was depressed, angry and short-tempered. I remember the day like it was yesterday and not almost nine years ago. It was a Friday. There was a blizzard. After work I had to get across town for something inconsequential. The office I was working out of was located on 8th Ave and 15th. The snow was coming down heavily and I was certain it would be difficult to hail a cab. As soon as I stepped out of the door onto the street an available cab approached. I thought I was lucky; my miserable, pathetic life was finally turning around. He pulled over and I stepped in "1st Ave and 1st Street," I told him. The nexus of the universe.

After telling the driver where I needed to go I sat back and sulked like a baby "my life sucks," I remember saying to myself. The cab driver was jabbering about something, but I wasn't paying attention. I figured he was on his cell phone or singing along to a song in a language I didn't understand. After a couple of moments I happen to lock eyes with him through the rear view mirror. He wasn't jabbering or singing. He was talking to me. I leaned in towards the opening in the plexiglass separating us "Excuse me?" I asked. "You shoulda caught a cab on the other side of the street," he barked. Was he serious? He couldn't have been serious. "Are you serious?" I asked. "If you know you have to go that way, that is where you catch the cab." I was dumbfounded. Or flabbergasted. Or flabberfounded. It took me about 2 seconds to lose my shit. "Just drive me where I tell you to drive me," I screamed. He screamed back. I wasn't hearing his words. All I knew was that he was yelling and I was pissed. "Just drive, you asshole." I heard him say something to the effect of "I'll drive you to Harlem and leave you there." I rattled of a series of "Fuck you's" for about 20 seconds straight. What he said in response was beyond my comprehension.

Why was I having this argument? I didn't really understand. I started to realize there was a chance I could end up in Harlem, about a bazillion blocks from where I needed to be, so I screamed "Pull over. Pull the fuck over NOW!" He kept screaming back at me, but he obliged at the next corner. I was out-of-my-mind at this point. As soon as the cab came to a stop I threw the door open and put one foot into the wintery-New-York-street-slush-muck. I looked back at the driver who was still screaming at me, his face perfectly framed by the rectangular opening in the plexiglass separation. I then reached down and grabbed a handful of icey-slushy-muck and threw it directly in his face, punctuated with a "FUCK YOU!" I slammed the door and walked off. Fifteen or twenty steps later I realized what I had done. There was something wrong with me and changes needed to be made or else I could end up in a gutter in with my face kicked in someday. I started to change that day. Today, nearly nine years later, I write about that guy a lot.

A:  It is logistically impossible for theaters to have an open submission policy. There are too many plays and not enough time to read and consider them all. I would like to change that.

On the other side of the coin, I’d like playwrights to really figure out if a theater is a good match for their work before sending it out. We are the ones who are creating the stacks of plays that nobody can get through because we’re sending our kitchen sink dramas to theaters looking for musicals.

A:  My wife is my theatrical hero. Before I met her I was simply dipping my toe in writing while my primary creative impulse was acting. She got me to dive in completely and showed me how to be dedicated to the craft. I may not have ever considered myself a writer if not for her. She is also the first and primary reader of all my work. I trust her opinion more than anybody else. I’d be screwed without her.

A:  Going to theatre is like playing “Duck, Duck, Goose” when you REALLY want the goose, but you just keeping getting the duck. It’s really thrilling when you finally get a goose. I guess what I’m saying is I really like geese.

A:  Listen to your work. It will tell you exactly what you need to do next. Don’t be afraid to follow it. It doesn’t matter what you initially set out to write, once you start, the play is in charge. Do what it says.

Live a life. Have fun. Leave the computer at home sometimes. You’re still a writer even if you aren’t writing 24/7.

Read what every playwright said in this space before me. I have learned so much from reading these interviews. I’m sure everybody who follows me will also have fantastic advice. Bookmark this blog.

A:  I have a short story coming out in the anthology “The Commonplace Book of the Weird.” Check it out. Its chock full of HP Lovecraft goodness. The book launch is October 18 at Bar 82 in NYC. More info here: http://www.facebook.com/l/e3a9aMSTB6i2qppTDzjlxmyI2EA;www.commonplacebooks.com/

Boston Court is presenting the world premiere of Jordan Harrison’s “Futura” beginning October 9th. See this play if you are in the LA area: http://www.facebook.com/l/e3a9amjbcG6lezbQo3VGFN3qXag;www.bostoncourt.com/events/62/futura

My wife has a play, “Technicolor Life” being presented at the Ashland New Play Festival October 21 and 22. http://www.facebook.com/l/e3a9ao6gAhFPbapxmqDclMY6QZw;www.ashlandnewplays.org/

I’m on the Board of Directors for needtheater in Los Angeles. They just opened the world premiere of Michael John Garces’ “The Web.” It runs through October 17 at ArtWorks in Hollywood. http://www.facebook.com/l/e3a9aybF_HrJyph-AVCsoJIcK3w;www.needtheater.org/home.html
Posted by Adam Szymkowicz at 9/22/2010 07:18:00 AM

How to seduce a woman said...

Wonderful article,thanks for putting this together! "This is obviously one great post. Thanks for the valuable information and insights you have so provided here. Keep it up!"

What was it about your early life that led you to the explosive attack on the cab driver?