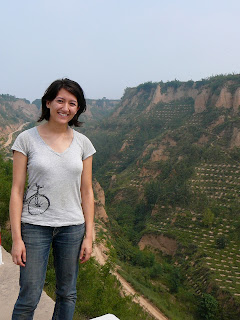 Current Town:
New York. A place that would look like a douchebag for claiming to be the greatest city in America on every public bench.

Q:  Tell me about your upcoming show at EST.

A:  It's called In Quietness, and it's about a former CEO who has left her job to follow her recently born-again husband to a Southern Baptist seminary in Fort Worth, Texas. She's the type of person who doesn't know how to fold a sheet, so she enrolls in the seminary's Homemaking B.A. program. The play explores the difficulties of fitting oneself into a box, whether that box be gender, religion, profession, or social expectations, and why, given how difficult it is, we all try so hard to do it. The production is a part of Youngblood's Unfiltered series, which is an annual assortment of studio productions of full lengths by Youngblood writers.

A:  I'm also a member of the 2010 Emerging Writers Group at The Public, where I'm working on a play called Hunger. The play takes place in rural China, and it explores what the landscape of life is like out there right now, and how that is as much shaped by the country's tremendous upheaval during the past century as it is by its hopes for the next one. The plot revolves around minghun, a traditional burial practice in which bereaved parents will buy the corpse of a girl to bury with their dead son in a joint wedding/funeral ceremony to ensure that he is not lonely in the afterlife. The living are played by puppets, and their puppeteers become their souls in the afterlife once they die. I've been working on this piece, the research or writing false starts, for over two years now. It has been an exercise in perseverance. But the writing is finally moving now, which feels great.

A:  Once as a kid I came downstairs for breakfast and found my mom cutting my dad's hand open with a razor blade over some paper towels on the kitchen table. Apparently some lead shot that had been lodged in there for years after an old hunting accident. That morning it had been bothering him, so he asked her to cut him open and get it out. Doctors, man. In retrospect it seems strange that an 8 year old would be not at all disturbed by this. I think I had cereal and watched. As a writer I think that interest carries over...I like the visceral clockwork that keeps us breathing and swallowing and shitting so that we can think our lofty or stupid thoughts. One of my plays, GORMANZEE, stages the strangulation and evisceration of a shaved gorilla (puppet) and a nearly naked human (actor) while a chimpanzee (actor) fear grins and runs around screaming, fruitlessly searching for escape. My company produced it at The Flea last summer and I assumed it would be a real thigh slapper. But judging from the appalled silence on a few nights, some audiences were traumatized. Especially the little kids who came thinking it would be a puppet show. Yikes. I do feel a little bad about that. But I still think it's the funniest thing I've ever written.

A:  Theater is like a drug, isn't it? The more I consume, the more I need from it. Story used to be what moved me, and I still love (and to some extent need) a good story, but now I'm hooked on visuals, particularly the use of puppets and objects. Force me to see life in a dead thing, force me to love that dead thing, force me to mourn the death of a thing that never lived, and you are forcing me to be conscious of the act of being human. Also, I like solving puzzles. I like ambiguity without vagueness. I really like laughing, I like hilarious characters that show me a good time. I like elegant transitions and messy interactions. I like shocking shifts in visual perspective. I like seeing something that expands how I see everything.

A:  1. If you live in a place that has a theater scene, then it is my opinion that you should see plays and read other stuff. Scripts are blueprints for plays, and although I know I'm supposed to like reading them, I just don't. Maybe that's bad advice, but so far I don't think I've been screwed by it. I think my time is better spent reading outdated manuals on how to be a secretary in 1963, advice columns, fundamentalist blogs, recipes for fertilizers, the Wikipedia pages for massacres I never knew happened, poetry, the Bible, the dictionary, obituaries, the epic origin stories written on organic food packaging, and the sentence on the side of the Domino's sugar box (seriously, check it out, it's weird). Get a news site to email you all the articles about some random country every day for a year. Become an armchair expert on something. It will probably start to show in your writing. Or even better, you may end up at some horrible party where some insufferable person is talking out of their ass about North Korea or whatever and you can be like "SHAZAM! I know everything there is to know about North Korea, fool!" That has never happened to me, but I haven't given up hope.

2. Try to get enough fresh air.

3. Read all the other advice from the other playwright interviews on Adam's blog. They have all already said all the stuff that first came to mind when I started answering this question.

4. Read Anne Lamott's "Bird By Bird." It will make you laugh and feel better about everything.

A:  The other shows in Unfiltered are fantastic!
-Sweet Forgotten Flavor by Patrick Link (running now, don't miss it!) is set in this beautifully timeless, placeless, sideways fairy tale-ish world that quietly and brilliantly elevates the conflicts at work among its characters. Really wonderful.

-The Sluts of Sutton Drive by Joshua Conkel is yet another winner from an incredibly talented writer. It's dark, twisted, and hilarious. Jaded suburban moms drink cleaning products to deal with the bleakness of their existence.

The first Sunday of every month is Youngblood's Brunch series, which is brunch+new short plays around a theme+drinking. Don't miss it!
Posted by Adam Szymkowicz at 1/16/2011 11:25:00 AM

Thank you, that was extremely valuable.