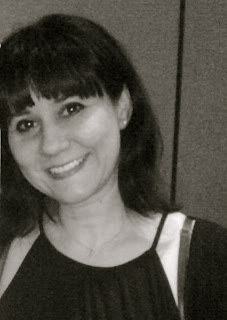 A:  I'm currently completing the third draft of a play about the late historian, Howard Zinn, with whom I had the honor of working with for a couple of years. It's a multi-media piece with interviews and recorded voices and as it takes place in a radio station. I'm having a lot of fun adding 60's and 70's music to it.

A:  I remember a story - I’m not sure it explains who I am but it did seem to confirm one particular thing – the end of my stage career!

I was 7 and playing the prince in my boarding school production of the King and I and all I had to do was hold my head up as I bowed, being careful my crown didn't topple over. Now this crown was a rubber ring from the gymnasium and sure enough, the king entered and I did a deep bow and off flew my crown landing with a thud on the floor and rolling straight off the stage and into the bemused audience. I was mortified.

A:  What I admire most is brave writing.

A:  Brave theater. I don’t mean to be redundant here but I genuinely think a brave, true, courageous voice in any artistic medium is rare and exciting.

A:  I’m not sure I’m one to give any advice. All I know is that it works best for me to love what I’m writing. Someone asked me the other day how I pick my subject matter and I said I write about things that make me throw up. This is not a contradiction. I write about things that make me sick to my stomach as that is what is important to me as a person. Then HOW I write about it – the writing process, the form, concept, etc. is what I need to love. As an example; for years when I would drive by nuclear power stations or hear about power plants on the news, I would hold my breath. It was just a knee-jerk thing because it would just make me feel so dirty and gross and my body didn’t want to take any of it in. So I started paying attention to this kind of thing and listening to my inner voice and writing about upsetting things like animal testing, things that made my blood boil, things I hated. But how I wrote about them was what I had to love. i.e. for the animal testing script I made my main character a man who had turned into a bunny from the drugs he tested on himself and he was our narrator who hopped around the stage and told the story through acrobatic movements and from the point of view of a rabbit. This I liked a lot.

A:  Can I plug my brother who just wrote a huge Hollywood film that will be coming out next year – The biopic of the late rapper, Tupac Shakur.

I’m looking forward to my upcoming trip to Rwanda in order to integrate Rwandan genocide stories into my genocide play based on 800 hours of eyewitness testimony from the Armenian genocide. The hope is to demonstrate the universality of this sickening crime which incomprehensibly continues to this very day.

And more currently, next week I’m producing a reading of the winner of the $10,000 Saroyan Playwriting Award that is run through my non-profit at the Los Angeles Theater Center with a fabulous cast. (www.armeniandrama.org).
Posted by Adam Szymkowicz at 1/25/2011 01:39:00 PM