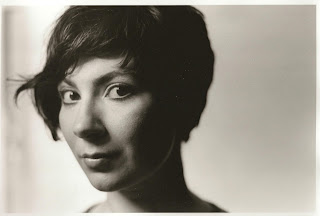 Q:  Tell me about AliveWire and your upcoming show.

A:  Scott Rodrigue (my director and cofounder of AliveWire) and I met a couple of years ago at a Pataphysics benefit at The Flea. It became clear pretty fast that we were going to make beautiful work together, which is a specific kind of love and marriage. Our respective partners get it.

Scott been a huge part of Besharet’s development. He’s the first director to understand that my writing is wholly an intuitive process-- our act of discovery is ongoing. So you have to be brave and generous and willing to change.

Besharet is an ambitious play, wrestling huge issues (love, faith, gender, sexuality, atrocity) in a intimate way. I’m interested in where the private meets the public, those intersections on shifting grounds. I started it 4 years ago, I feel like I’ve come of age writing it. At times the play has surprised me so much I’ve been truly creeped out, as in “that came out of me?”

Our cast is so powerful, our crew are such inspired artists-- I can’t believe I get to work with these people.

I’m collaborating with wonderful artist Delia Gable on The Ruthie Chronicles, a graphic novel in two parts. Part one will be out this summer. I’m a huge comic book fan from way back, but never realized the extant of storytelling potential. The access of comics to inner life, dreams, fantasy-- it’s intoxicating and liberating. (You don’t need more money! You can do ANYTHING.)

I’m currently in development with film director Kevan Tucker (The Unidentified), who is big-hearted and rad, for a feature length love-song to the city of Worcester, MA. We’re shooting on location this summer. I’ll be acting as well as writing, which is scary. I’m so excited to learn how to make a movie.

A:  I’m a stutterer and have been my whole life. My communication has always been fraught. I started writing poems and songs as a very young child, dance and puppetry as I grew older-- sometimes as a way to survive presentations throughout school. If I could make a really creative, funny puppet show about the U.S. constitution, my classmates would forgive that I couldn’t speak under pressure. (Thus the monocled sock puppet “Mr. History” was born.) So I guess I began as a writer out of necessity. The funny thing-- it’s such an asset to me as a grown-up. EVERYONE has trouble communicating. My physicalized struggle made me curious about what’s hidden, unexamined. And curiosity paired with empathy is a great start to being a writer.

A:  Money and the ways we use it. We need new modes of creation-- so many new plays are getting developed endlessly without ever seeing production. You cannot realize your play without having it embodied. I know our biggest challenge for AliveWire is space--both performance and rehearsal. I spent about a month rehearsing a performance piece in textile warehouse in midtown, at night after the staff went home. The city is bursting with these underused spaces. So I would change our mindsets: the way we think about theatre, money and the normal channels of production.

A:  Three very shaping experiences: My parents took me to a dinner theater production of Brigadoon in a Maryland suburb when I was around 7-- I think I had my mouth open for the entire show. At 14 I was in Our Town and I remember listening to Act III night after night, peeking into something beautiful and devastating. At Hampshire College I was in a production of Suzan-Lori Parks’ Venus. Her work is very powerful in repetition, a blossoming, an unfurling occurs. (Suzan hugged me years later when I told her I was a fan-- established artists who are warm and generous to strangers are always heroes of mine.)

Craig Lucas is a hero of mine, big time.

A:  Messy compassionate curious theatre. Theatre that does many things at once, like looking at the whole world-- beauty and horror existing together, rather than undercutting each other. I dig sincerity. It’s more funny/fulfilling than detachment and irony. I dig ambition and simplicity. Honest looking. Work that expands.

A:  Follow joy. Meet lots of people. Make friends with the ones who delight and inspire you. Inside a great friendship, opportunities to work together present themselves organically- you can’t enforce a timeline. It’s important to work on your health and happiness as well as your craft. Eat well, exercise, be silent, listen, go dancing.

Q:  Tell me about when I saved your life.

A:  This summer I went on a silent retreat in the Catskills led by the singular Erik Ehn. On the last night, three playwrights closed their laptops on the porch in unison. Scotch appeared, silent toasts all around. Had we finished our plays at the same moment? We couldn’t ask, because we couldn’t talk. Casey ran away with her glass, returning with oars and a gleam in her eyes. An understanding emerged. Casey, the rogue Eric, his cigarettes in a plastic bag for waterproofing, you and I made our silent way to the dock in the deep dark. It was a starless night, I recall, with a true breeze coming down off the mountains. You stood chivalrous beneath the dark forest canopy, assisting Eric, Casey and I into a canoe and pushing us off into the black water. We paddled with vigor briefly, then thought in unison-- it is very dark out. How will we find out way back to our unlit dock on this starless eve? We sat silently in our still vessel. Eric smoked his waterproofed tobacco. It had been a beautiful six days. About a half an hour later we began paddling, at first in a circle. The wind had pushed us back, but how far? We argued silently, gesticulating with our paddles. We paddled on and laughed to the great Poseidon at our present calamity. I briefly considered leaping into the water and pulling our wayward vessel to the nearest patch of shoreline. We would not speak! The trip was too profound to break our reprieve from socialization prematurely. Suddenly, I opened my mouth. “Ka-kaw!” I cried, a primitive bird call meaning “Where is the dock? We’re lost!” “Ka-kaw! Ka-kaw!” you answered, meaning “It’s right here and it’s time for tea!” We paddled toward the sound of your cries, and you helped us weary seafarers on to dry land.

A:  AliveWire Theatrics presents Chana Porter’s Besharet March 5th-27th in Space 9 at PS122, $18 general, $15 students/seniors. Saturday March 12th is our donor night, $50 for the show and a post show soiree with open bar, delicious eats, music and revelry with cast and crew.

A reading of my new play, Leap and the Net Will Appear will be directed by Craig Lucas on March 14th, in Space 9 at PS122 at 7 p.m.

That silent canoe story is wonderful!

I totally agree with the article.