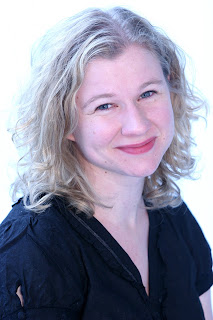 Current Town:  Hays, Kansas (also known as "Hays America" in these parts--I have no idea why). It's a small town in Western Kansas, pretty much in no man's land.

Q:  Tell me about your play coming up at Pacific Playwrights Festival.

A:  How the World Began was commissioned by Manhattan Theatre Club through the Sloan Foundation. It is about the firestorm that results when a new teacher makes an off-handed comment about the origins of the universe in a small Kansas town recently felled by a tornado. It's my first Kansas play and is, in many ways, an exploration of where I live now.

A:  My second Kansas play and a screenplay set in my hometown.

Q:  What's it like pursuing a professional playwriting career while living in the middle of nowhere?

A:  Challenging but also possible/rewarding. On the one hand, I love that my cultural experience is unique and that definitely stands out in my writing. I love having a big organic garden and not having to have a day job. I'm constantly amazed at what great feedback I can get from my local friends when I invite them over to sit around the fire and read my latest play. Since moving out here, my career, such as it is, has progressed slowly but surely, and I don't sense that I'd be that much further along if I lived in NY or LA (excluding TV/film opportunities, of course). On the other hand, boy, I really wish I had a writer's group. I really regret that I was never able to pursue the opportunities at Julliard, Ars Nova and the like.

A:  In no particular order:
Less talking about doing and more doing
I wish the Times coverage was more in depth
Rush tickets for all ages across the board
More women on Broadway--but really excited for Katori Hall and Lisa D'Amour this year!
Closer to home

A:  The Irish, especially Brian Friel. Horton Foote. Naomi Wallace. Lately, I'm in love with Annie Baker, but it's unrequited. She doesn't even know I exist. *sigh*

A:  When I don't know what's going to happen next. When the poetry is organic yet memorable. When characters are led astray from the PLOT, like when the son kisses the father in Albee's The Goat. I wasn't really caring for the play and then *that* happened, and I was suddenly led into deep waters. I really like being led into deep waters.

When plays are funny without being precious or quippy or whimsical. That's a very hard funny to achieve.

A really good musical can rock my world.

A really good production of Beckett can send me weeping into the void.

Just thinking about all the great new writing happening in NYC as I type this fills me with longing. Today, I wish I could find a sitter for the kids and go see Bathseba Doran's Kin and then maybe take her out for sushi afterwards, b/c there is no sushi in Hays America. We would gossip and talk shop and get drunk. (Yeah, she doesn't know me either. Do I seem like a stalker? I'm not a stalker. Really.)

A:  Much has been covered on this topic, but I don't think we can stress the benefits of self-production enough. I produced my play crooked at the 2004 Edinburgh Fringe Festival with my friends, and it took me to SPF, the Bush Theatre in London, Off-Broadway, and now all over the country and even abroad. I never would have written that play if I hadn't wanted to do Edinburgh with my friends.

Obviously, not all self-producing ventures have a happy ending, but you will learn tons of things along the way, even if you lose all your money, friends, and self-esteem, which has also been known to happen. In which case, you may learn that what you really want to do with your life is to go into banking or speech therapy. There are worse things, as my Mother constantly reminds me.

Secondly, while it is ever so important to master the discipline of writing daily, there is also something to be said for recognizing your own creative rhythms and allowing for gestation to take place. There may come a time when actively NOT WRITING actually helps your writing. I find fallow periods can be very productive, and I always write better plays when I allow for them. Not everyone needs to write five plays a year, and let's be frank, nobody writes five good plays a year.

And finally, everyone writes some duds along the way. Even Tennessee Williams. Even Tony Kushner. It's okay.

A:  How the World Began at PPF and then look for it Off-Broadway in January 2012.

Also, a film I wrote, Angel's Crest (featuring Jeremy Piven and Elizabeth McGovern, among others) is premiering at the Tribeca Film Festival: http://www.tribecafilm.com/festival/features/TFF_11_World_Narrative_Features.html
Posted by Adam Szymkowicz at 3/23/2011 01:56:00 PM

Nice article, thanks for the information.

I figure out it's perfect to interview play writes specially when we can get excellent thoughts with this, I mean play writes are very talented people and we could take advantage of it.

Nice post! I really love reading this article, and i know i will get something good here.