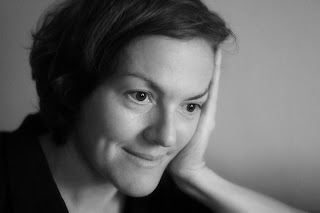 I was born and raised in DeKalb, Illinois, 60 miles west of Chicago. I left there at seventeen.

A:  On a play called Peace. It’s about a peace group. I’m telling folks that it’s about how the motivations for our politics end up being deeply personal and sometimes violent. But honestly, it’s my chance to say something about drone planes.

A:  I can’t answer that so quickly. Let’s just say it’s a directors’ theatre and plays (if plays are the source, at all) are material to be cut up, rearranged, lifted from, riffed on. There are no organizations protecting the sanctity of written work or the playwrights’ role in the process. Sometimes the work is really breathtaking to watch. It’s subsided by the state. But quite often there is little humanity in it. Lots of bodily fluids flying about and shouting. I didn’t come to Berlin for the theatre.

A:  I lived in my own little theatre as a girl. In my room (I was lucky to have my own room). I created complex and nasty scenarios with my Barbie dolls. And acted out all kinds of scenes in front of the mirror. My little girlfriends and I played a lot of dramatic games like The Newlyweds and the Dating Game, and it’s quite possible I was responsible for staging them, though I don’t remember. At my instigation, we staged a couple plays in my garage, mainly to make money. So, I guess I can’t blame theatres for doing the same.

That probably tells you exactly nothing about who I am as a writer or a person. Because all children live in unreal make-believe worlds. Except that, for me, this kind of behavior has never ended. It is certainly borderline pathological and suggests I never grew up.

A:  I would wish our American theatre was open –and hungry—to tell stories about the world we live in. What we think of as ‘problem theatre’, you know. Plays about the massive problems we face as a society, a world, a planet.

A:  My heroes tend to be outside the theatre, progressive journalists, for example. (Right now they are Amy Goodman and Laura Flanders.) But I most loved Pinter when I was starting out. His language makes me laugh with delight. His play The Caretaker is perfection for me—deeply humane and funny and asking a huge question--about compassion, how we treat others and why. And Ibsen. He’s the greatest social dramatist who ever lived, if you ask me. The one regret I have about giving up acting is not having the chance to play Hedda Gabler.

Today, I think any playwright who tackles the big stuff with honesty is a hero. A few are famous. But there are a lot of them around. You wouldn’t know it from looking at what gets puts on, though. They come in all shapes and colors and sizes and an outsized portion are women.

A:  See above. I am less and less excited by theatricality. Or anything overtly clever. Or personal dramas, unless they reflect on some larger phenomenon. When I look to see what’s on, I choose plays where ‘big things’ are examined—and if they are presented with suspense—and they’re funny, to boot, that’s great. But the core has to be something serious, ie. someone has to have something they want to say about the state of the culture/society/economy/planet.

A:  I don’t have advice. I have a plea! Think about alternatives to what is out there in terms of reaching and creating audiences. Save the theatre from institutional death!