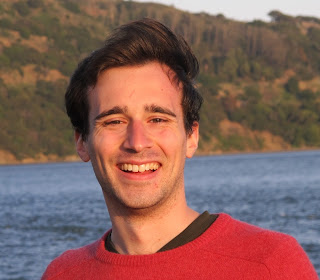 Q:  Tell me about the play you have coming up with Trustus.

A:  Swing ’39 is an imagined story about a group of girls from 1939 Harlem who win a competition to meet the King of Swing, Benny Goodman. The play is about the relationships that spring up between the Italian Harlem residents and the members of the Goodman organization, including one girl who becomes romantically involved with Benny himself.

I’d characterize the play as a character-driven ensemble piece, initially inspired by the works of Chekhov and Terence Rattigan, two greats I was reading a lot of when I wrote the first draft three years ago.

Swing ‘39 was originally done at Sarah Lawrence College, a production in which I actually played Benny. This August you can catch it at the Trustus Theatre in Columbia, South Carolina. It’s part of the Trustus Playwrights Festival, one of the oldest play festivals in the country. I am extremely honored and excited about this wonderful opportunity.

A:  I’ve been developing my new play, Tabor, at INTAR, where I’m a member of The Pound, the new emerging artists lab there. I will most likely have a reading up some time this summer.

I’m rewriting a one-act of mine, North Island, that I hope to pair with another short piece with similar themes. And I am in the middle of research for my long-term major project, a play about Al Smith, my favorite New York figure.

A:  I used to collect Carl Barks comic books, and I started before I could even read. I used to cut them up and make collages out of them. I still have my big journal with each page devoted to a different character – Donald Duck, Uncle Scrooge, Gladstone Gander. Each page is filled not just with pictures of the featured character, but images that represent what the character is “about.” So the Donald page, for example, also has pictures of bad stuff happening to Gladstone, his arch-nemesis.

I think this shows that even before I could comprehend narrative and plot, I had a very strong interest in character. I understood that personalities were being expressed and contrasted, and that each character had an ineffable yet specific essence.

A:  I think there are playwrights on this blog who are more eloquent when it comes to this question. But I will say that the affordability of ticket prices gets my vote for the top dilemma. If we could magically remedy that, I think many of the other problems would be helped.

A:  I am who I am thanks to a crack team of teachers and professors: Bill Williams and Michael Gilbert of Trinity School, and Stuart Spencer, Amlin Gray and Christine Farrell of Sarah Lawrence College.

My favorite playwrights are Shakespeare, Chekhov, Terence Rattigan, Lanford Wilson and Kenneth Lonergan. They love their characters. Lonergan and Annie Baker are the two contemporary writers on my must-see list.

I read Simon Gray’s Quartermaine’s Terms a year ago and it is my new favorite play. It makes me smile just to think of it.

A:  I like to leave the theater thinking about the characters. If I leave thinking about the writer or the director – how capable they are, how smart they are – that’s good, but it’s better if I don’t realize they’re there at all. As a writer I try to be invisible.

A:  Well I am definitely just starting out myself, so I feel a little bashful about this one. But I will say this: I got the Trustus production by submitting to everything I was eligible for in the Dramatists Sourcebook. And I have a file cabinet with dozens of rejection letters. So, if at first…

A:  Swing ’39 goes into previews at Trustus on August 10th, with an opening night of August 12th:

Come down before the fifteenth and we’ll grab a drink!

If you have children, you simply must take them to a Monster Literature show:

And if you’re planning on visiting the Williamstown Theatre Festival this summer, you’d be crazy to miss the reading of Sarah Hammond’s beautiful House on Stilts on July 8th.

Thanks for checking out my interview! If you’d like to read one of my plays, shoot me an e-mail at AlessandroMKing at gmail dot com.
Posted by Adam Szymkowicz at 6/02/2011 09:09:00 AM