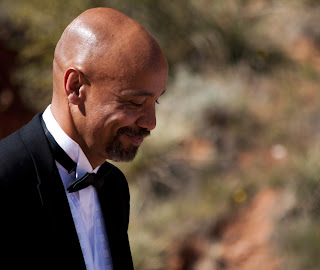 A:  I’m very single-minded in my work. I can’t focus on more than two worlds at a time: my daily life and a single creative universe. So I never work on more than one play at a time, and I never write when I’m involved in directing or acting. Right now, I’m gearing up to direct a production of Vigilance, a play I wrote 13 years ago. Directing is like the final re-write of a play for me—though I seldom change a line in rehearsal. The “writing” part is fleshing out the visual and emotional life behind the text. If I weren’t directing, though… I got nothing. Not a single play idea in my head. Which is a bit frightening. I believe that one day I’ll just simply be done, the rooms in the house will go dark, and that’s that. Let’s hope it’s not this year.

Q:  Tell me about 2nd Wind. What does being the playwright in residence entail?

A:  We’re small, lean, politically driven. For the past 20 years or so, 2nd Wind has produced 2 shows a year, plus the occasional reading series or festival show. We’re interested in small stories that resonate with larger social significance. As playwright in residence, I’m a company member, and I get to work with some great directors, actors, and designers as I create. They’ve produced 2 out of my last 4 world premieres, which is pretty great. There’s no guarantee, of course; I’ve got an unproduced play looking for a home right now….

Q:  How would you characterize the San Francisco theater scene?

A:  Hmm. It’s wonderfully vibrant with many different artists exploring different aspects and styles of the art. And it’s over-saturated. San Francisco is artist-rich (and entertainment-rich) in every category, which can make quite a din. It is by some counts the largest community of small theatre companies in the nation, which is something I wish we made a bigger deal of. Our major companies can compete, quality-wise, with NY and Chicago; but it is our “little theatre” diversity and energy that really stands out. Funders should take note; so should reviewers; so should NY and Chicago. One thing it’s missing (which draws playwrights & producers to NY), is the ability for a show to expand and continue its run when it does well. Here, our runs are for a relatively short, set duration, and great shows are often forgotten after a few months. We should take note of that.

A:  That’s kinda tough. We’re entirely created from our history, and childhood is a deep forest. Recently, though, I was reminded of an experience which shaped me. One long summer afternoon I went to my dad, a renowned composer, and complained that I was bored. He said—and I quote: “Only stupid people get bored.” And that was all. I think I was ten. It was brilliant on two counts: first, I never complained to him about being bored again. Second, he was, for the most part, right. I had my entire imagination to work with that afternoon. But he also taught me that when I thought something was boring, stupid, or nonsensical, that I was responsible for finding the worth in it. Like that long summer day. Like the mundane details that make up one’s life. Like art. I hope I find the courage to say that to my children.

A:  More city, state, and foundation funding for venues, contingent on lower rates for the organizations using them. If we could lower the cost of theatre rentals, we could lower the cost of tickets. More people of different economic levels would go. We might also encourage companies to be more adventuresome in their programming, possibly leading to more productions or bigger productions, providing more roles to actors, designers, and staff. With less on the financial line, our “discussions” might become more diverse, more representative of the whole community we serve. In the Bay Area, the city of San Jose subsidizes one of its venues, and it’s a huge boon for the theatre community there.

A:  For the past 20 years, Athol Fugard has been the first name on my lips. Still is. I have equally important heroes in other disciplines: Rene Magritte, for his ability to create visual-cognitive resonance; Beethoven, for the breath-taking beauty and power of his work; my brother, Gregory Walker (a violinist and composer), for his creative risk-taking and ability to balance art and life. They’ve all inspired me as a playwright.

A:  Normally I wouldn’t dream of answering that one until after I‘d pummeled the new playwright with questions for at least half an hour. At any given time, what one needs to hear is very individual. But one of my most important lessons was to make my own opportunities when doors were closed to me. If no one wants to produce your play, produce it yourself. Host your own staged readings. Self publish. One of the central struggles of any artist is to define oneself. As playwrights we’re only charged with creating art. How it gets done isn’t horribly important in the long run. Something I’m terrible at is being “professionally social.” Don’t be like me. Go to workshops, conferences, readings. More importantly, volunteer at theatres. Get to know how everything—especially on the creative side—works. We’re responsible for creating a world. It takes sets, lights, sound, and competent management to do that in theatre. Be competent in everything. Whoever picks up your script should be able to envision it in their own discipline.

A:  Did I forget to mention Second Wind’s production of Vigilance at The Phoenix Theatre in San Francisco (www.secondwindtheatre.com)? An uncooperative new-comer drives his neighbors down a path of mutual destruction, laying bare long-buried secrets in this richly imagined, award-winning drama. February 3rd – 25th, 2012.
Posted by Adam Szymkowicz at 11/23/2011 04:49:00 PM

companies that do home staging

Thank you for this useful site Virtual Staging<>