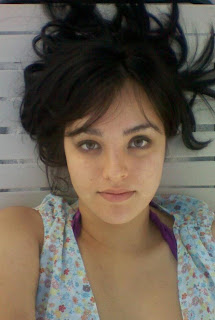 Hometown:  Kamakura, Japan and Lexington, Kentucky. I claim both places because I was born in Japan and spent most of my childhood there until my family moved to the United States, where I spent a lot of my formative years. There was also a lot of traveling back and forth in my early life to see my American family on my dad's side while I was living in Japan near my Japanese family on my mom's side and vice versa. I was always immersed in both cultures, and attended school in Japan in the summertime while living in America as well as hoshuko ( a Japanese school for Japanese kids the US) where my mom taught on the weekends, while also attending regular school in Kentucky. These opposite worlds had a severe impact on who I am today which is a defining characteristic of the "hometown" concept.


A:  I'm working on a play with my theater company, Everywhere Theatre Group, and writer Teddy Nicholas , called FLYING SNAKES IN 3D!!! which was a part of the 2011 Ant Fest at Ars Nova and got picked up for the 2012 maintstage season at The Brick Theater in Williamsburg (running Jan 18-29th). It's a play essentially about class division in the theater world under the guise of a hilarious science fiction plot involving a group of multi-cultural heroes fighting mutant flying snakes (a.k.a. rich white people) that are taking over the Earth (a.k.a. theater). It's also about our company's struggle of making collaborative theater in general, especially when the core artists have the disadvantage of being unconnected and coming from poor families. I think it's a timely piece and a lot of sad hilarity ensues as we take on the enormous challenge of making a play about flying snakes, which is essentially better suited for an art form with a much bigger budget like film or television. Most importantly, audiences can throw rubber snakes at the actors during it. You should come!

I'm also working on two television pilots; one about a group of 20-something girl-roomies in Brooklyn who decide to start an escort business and another one with comedian Jen Kwok about an unconventionally beautiful girl who gets dumped by her boyfriend for a thinner woman and finds solace in the underground NY burlesque scene.

Lastly, I'm preparing for a mini-workshop of my play, Death For Sydney Black with New Georges set for April 2012.

A:  When I was in elementary school, my Japanese school friends and I were obsessed with Sailor Moon. We use to watch bootleg video tapes and act-out the episodes together after class at one of our houses. The original Sailor Moon stories are really messed up and deep....like they all die horrible deaths multiple times (because they have multiple lives) and lesbian cousins fall in love with each other and cats talk and say profound things about how amidst hardship, life is beautiful and stuff. It got me through a lot of hard times and that's when I started to really see how playing pretend and talking about confusing things with other people through the voices of pre-written dialogue (although we were paraphrasing anime plot-lines) could be really beautiful. I also read a lot of manga, and I'm pretty sure that's where I got my knack for dialogue.

A:  That playwrights and artists from underprivileged communities could have a voice on professional stages, instead of those who have no idea what they're talking about go and research them and take credit for their stories.

A:  My teachers who let me explore and be free in theater as a child. One in particular, the awesome Lisa Osterman, who made me read The Deadly Theater when I was like twelve at a public school in KY in the middle of the projects. Also, any NYC theater artist who is constantly struggling but working hard and making beautiful things.

A:  Theater that makes me feel things that no other art-form can match up to. This can come in many forms for me, but I am particularly a sucker for visceral things, poetic language, singing, music, modern themes, young people, un-apologetic tones, sex, the combination of many elements, site-specific work, unconventional audience seating, chaos, subtly, slyness and anything that makes me feel extreme emotions. A fantastic movie can make me cry and laugh but a fantastic piece of theater can change my life and whole way of thinking.

A:  Take a gamble on yourself and write honestly about what you know. Formulas and insincerity are transparent and people can watch it on their laptops for free. Don't write for the stage unless it needs to be on stage. Also, go see other peoples plays as much as you can and find a mentor whose work you respect at least as much as your own. When you find them, treasure them. Same goes for collaborators.
Most importantly, be inspired by failure, because if you're a playwright, you should be willing to fail a lot or you're doing something wrong.

Use the code VENOM for the first two nights to get $12 discount tickets (applicable only for pre-sales, not walk-ups). Come on opening night and join ETG for an VIP after-party!

Also--go see the amazing Emily Davis perform my text in the encore performance of FORTH on January 7th and 8th at 11:30 pm at Magic Futurebox. Arranged by Tommy Smith, directed by Meiyin Wang, with additional text by Leah Winkler (read my text that Tommy used here!) Buy tickets here!
And for the latest news on me, visit www.leahwinkler.org!
Posted by Adam Szymkowicz at 12/28/2011 04:43:00 PM