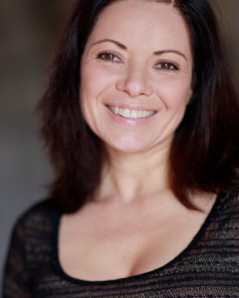 Hometown: Born in Bogotá, Colombia. From the age of two have consistently traveled and lived between Northern Spain (Guernica, Barcelona), Hollywood, and New York.

Q:  Tell me about Teresa's Ecstasy.

A:  Teresa’s Ecstasy began when I was doing research for a screenplay I wrote about Salvador Dalí, THE PERSISTENCE OF MEMORY. In one of his biographies, he mentions the books he kept on his bedside table, and one of them was “The Autobiography of St. Teresa of Avila”. As I began to learn about Saint Teresa and her remarkable mystic life, the more I desired to live in her world. This play began as a one woman play, and Shawn Elliott was to be my director. Shawn read my first draft, and his response inspired me to turn it into a full length multi-character play. There are many aspects of my life in this play, but there are also many more aspects of my imagination and the metaphors I observe within relationships of all kinds throughout my own life journey. I’m interested in exploring the contradictions we sustain within us, and the ultimate meaning of love. The worlds I write about are those that fascinate me, intrigue me, and those which I’ve been a part of but also those I haven’t had a chance to be a part of. I’m interested in writing works that heal the spirit in some way, and speak truths with all the life force that we have inside us. I loved finding out that Saint Teresa was a spit fire, was charming, and funny, and tenacious and imperfect. She wasn’t what I had imagined, a cloustered saint, depending on the graces of god alone to work miracles, but actively and with pragmatism, pursuing what she believed to be of value, even if to others it seemed absurd and unreal.

A:  I’m hopeful that the day will come when the Dalí film project gets made, so while the producing possibilities work themselves out, I’ve started to adapt the screenplay to theatre, because it’s such a vibrant piece of work and so apt for the stage, as well, and maybe will be a musical.

I’m also working on a piece titled, TALK SHOW, with Hispanic historical characters, Simon Bolivar, Eva Peron, Pasionaria, and Antonio Machin, having a round table discussion with God. I love that piece, but know that it needs a lot of work still. Right now it’s at that stage where the audience walks away, informed, and stimulated, but they need to walk away with a lot more than that, they need to walk away with an emotional impact, with a heart beat that’s changed. I have a lot of digging to do there still. The first read through a few months ago, was very helpful for my next phase of plowing.

A:  No. I get an idea, an image, a situation that for me, is analogous to something greater and universal. That’s when I get excited. Most of the time it’s political on an emotional scale, but not sentimental. I begin, and that is when the story starts to unfold, and in that process, I’m becoming informed, and inspired, and then I start to live in that world, and start discovering a new life. It’s all about trusting the journey that it will take me somewhere, I don’t know exactly where, and trusting that my own life will inform the work as well.

A:  For what ever reason my parents allowed this to happen, from a very young age, I traveled and changed directions constantly. At age two we left Colombia, where I was born to live in a small town, a symbolic town, named Guernica, where my father was born, in the northern part of Spain, in the Basque Country, Euskadi. There we lived until the age of 6 to then move to the United States, to Hollywood. At age nine I was shipped off to Bogotá, Colombia for one year to live with a sister of my mother’s and her family. At age ten I returned to Los Angeles and by age 11 was sent off to Guernica, Spain where I lived for 3 years, and would spend every summer in France with other family members. Then back to Colombia for almost a year to return to Los Angeles, where I completed high school at John Marshall High. This kind of nomadic lifestyle never stopped for me until most recently, and I think that now is when I’m fully receiving the experiential benefits. Because changing from one culture to another, from one language to another, from one society class to another, has enriched my life with a sense of compassion, and understanding. The instability has equipped me with the tools of pragmatism, a sense of independence, self-motivation, solitude, and universal perspective.

The other side of the coin is a fear of abandonment, maybe. But that’s where the compassion comes in.

A:  It’s prices. I wish it was free. I wish it was based on quality and not on money, budgets, funding. I wish everyone has the chance to see a show, I wish teenagers learned to appreciate the arts, and the theatre, and be able to use it as a place of community and communion, as in a place of gathering to share intimate, profound thoughts and feelings, with joy, with humor, with imagination, with a sense of wonder. I truly believe that our society, and our world would be a better place with more available quality, truthful, character driven theatre.

A:  Brando, Paddy Chayefsky, Vanessa Redgrave, Harry Belafonte, Sophia Loren in “Two Women” inspired me to become an actress, and Frank Sinatra inspired me to want to sing. I have so many heroes, there are so many amazing artists, I admire. Bertolt Brecht, Harold Pinter, Shakespeare, Chekhov, my teachers, the beautiful Geraldine Page, may she rest in peace, and Michael Howard, and Bill Hickey, and Eric Morris, my dear friend and mentor, John Randolph. Oh so many. Stephen Adly Guirgis, Phillip Seymour Hoffman...

A:  Write because you love to write, write what you love to write about, what concerns you, moves you, intrigues you. First please yourself in that challenge, stay curious, passionate, humble, imaginative, and never do it for an end result. The pain and the pleasure is in sitting down and starting, and in that tedious, lonely process, growing as an artist.

What a great interview, Begonya, can't wait to see your beautiful play