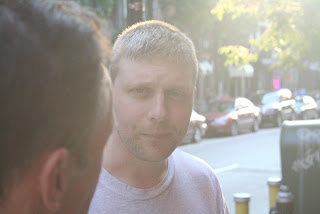 Q:  Tell me about the play you had a reading of at SCR.

A:  The play is called THE GROUNDLING and it was inspired by the final moments ofShakespeare's Love's Labour's Lost, with which I have been obsessed since being in the play for the first time about 16 years ago. Basically, it's about a Long Island man who has never seen a play before who sees LLL and is deeply affected. He writes his own verse play and hires two New York City theatre types to help him mount it in his garage on Long Island. I hope it's about how we, as theatre people so wrapped up in surviving and sustaining a place in the theatre, might be reminded now and then of the reason we're really doing this thing: the audience.

A:  My novel, WHEN I WORE FLOODS and a webseries called THE THING, which is about a group of New York theatre types who never "made it" and left the scene years ago but who come back together for one more off-off Broadway experience. This project may be the first of a sequence of midlife crises, but I'm enjoying it.

A:  In terms of NY theatre, I wish somehow that it appealed more to people not in the theatre. It's not the fault of theatres necessarily - but it often seems to me that much of theatre in our city is written, produced, publicized and critiqued for people in the theatre. I say that and here I am having written a play about a play...but in it there's a guy who's just discovered the power of theatre and is so moved he writes his own. I really wish more people who know nobody involved in the production - or theatre in general- could be in the seats (and I'm not talking about Broadway)...but again, there's much blame to go around for this...unless I'm just wrong.

A:  Anyone who produces, buys, or even talks about my plays. Kidding, but not really. The real answer: Teachers of theatre I've had. Dr. Harold Tedford at Wake Forest University who invited me, a jock majoring in baseball, to take his theatre class. Deloss Brown of NYU, who cast me in...you guessed it...Love's Labour's Lost when I first came to New York in the '90s to be an actor. Both teachers, both people who devote their lives to spreading the word about theatre to those who may not otherwise ever find it in life, both who feel theatre is for and about everyone. I 'm lucky enough to plays at City College. I try to emulate them.

A:  So many different kinds it's impossible to answer. I get an extra kick out of theatre that works with no budget. But really, I'm ready to be excited at any show big, small, classical, new, professional, amateur, New York, anywhere.

A:  See plays. Read plays. And revise, revise, revise. Get to know actors and have readings of your play- in your apartment, in front of an audience, wherever- and realize that 3 years from first draft to opening night is pretty damn good. The Lark Theatre is a place for playwrights to meet directors. I met Shelley Butler there who directed a bang-up reading at SCR. Long live the Lark.

Great article. What is SCR? Thank you.