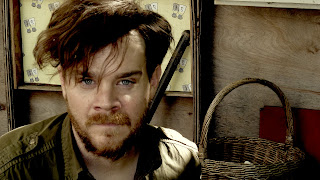 A:  It's called Down in the face of God and it's being produced by this exciting, young company called AthroughZ who are an honest-to-goodness theater company making vibrant, physical theater right in the heart of the film monster's lair. The play began when director Jerry Ruiz was doing a Van Lier Fellowship at Second Stage here in New York. He and the other fellows were interested in putting together an evening of 1-acts based on Greek myths & plays and he approached me about doing a riff on The Bacchae. I took Euripides' idea, transferred it present day Southern Illinois, then swirled in various other Greek stories set in Thebes. I created a 4-hander that I was real excited about and started sending it around to no avail. Then last December Caitlin Hart, the director and co-artistic director of AthroughZ, contacted me about producing the play. The catch: they had a large company of actors at their disposal and would I be interested in adding characters. After I put my brains back in my head, I said, "How many total characters are we talking about?" Caitlin said, "Seven?" And I said, "How about eight?" They flew me out in February to spend a week workshopping the new version and now it's about to wrap up a 3-week run at Studio/Stage in Hollywood.

A:  I created a whole world/faith/mythology for Down... and I have this ongoing love affair with the Midwest which gets tangled up with a love/hate relationship with Aeschylus, so I decided to rediscover and re-imagine his lost Oedipus trilogy. Down... is the 3rd part. And when the whole thing is done it'll comprise 3 generations of betrayal and striving for redemption in my version of life on the Mississippi. Then there are two plays that revolve around military veterans. The first is a play called Fault & Fold and follows two sets of siblings--a brother and sister in Iowa and a brother and sister in Afghanistan--as their lives become intertwined following an act of violence; and the other is a commission for the Veterans Center for the Performing Arts called Over Before We Get There. The VCPA exists to use theater to help vets transition back to civilian life. They were handed a collection of short stories written by Nick Corea, a Marine who served in Vietnam, and told they could adapt them for use by the company and I was asked to find a way to make that happen.

A:  The story, as my parents tell it, goes like this: I was pretty young and we were hiking in Rocky Mountain National Park--I was actually riding in one of those kid-carriers on my dad's back. The wind was whipping about, blowing through the cliffs above us, and I said something along the lines of, "The rocks are talking to me, Daddy." So my folks knew long before I did that I was going to grow up to be a creative type. Plus, I'm still a serious hiker and mountain climber, so nothing's changed much in the last 35 years.

A:  Burn the Regionals. Then see what we can build from their ashes. Or, at the very least, I'd like to reignite the idea that vibrant, exciting, new theater can be made outside of New York.

How do we find new ways of creating? How do we create works for an early 21st century audience? How do we get young people back in the theater? Some of the Regionals are starting to find ways to address all this, but they need to be doing more. Subscribers are literally dying off and young people don't even realize that there are actual, living playwrights creating new works. The furor over the announcement of the Guthrie's 2012-13 season is a perfect example of what I'm talking about. I have great hope for the new artistic leadership at Actors Theater of Louisville, but I'd like to see more bold moves like that across the country. The regional movement was a revolution. It's time for a new one.

And while we're at it, maybe we should take down Off-Broadway too(?)

A:  Rich Moran, Liz Carlin-Metz, the now defunct Primitive Science, Terry Gilliam, Anne Bogart, Paul Vogel, everyone in Theatre & Dance at UC San Diego, and my parents who have found a way to support this theater habit of mine through the years

A:  The kind that leaves me feeling out of sorts. Primitive Science created a play called Hunger based on Kafka's hunger artist stories, and I left not even knowing if what I'd seen was theater; but the result of engaging with work like that was that it expanded my idea of what theater could be and do. The SITI Company's bobrauschenbergamerica and War of the Worlds affected me like that too.

Or plays that I just can't stop thinking about for one reason or another: Julia Cho's Piano Teacher, Alex Lewin's The Near East, Sarah Ruhl's Eurydice, Tracey Letts' August: Osage County. I call them "gauntlet plays" because they challenge me to do more with my own work.

A:  No one's ever going to pay you enough to live on in this business. I'm a crazy optimist but dreams of making money from the plays you write should be forced out of your head. Please approach playwriting with that in mind. I don't say that to scare anyone away from the form. Rather I want there to be more of us out there, asking the tough questions, telling the difficult stories in a medium that forces human beings to actually live with and listen to one another. But unless you're a trust fund baby, you need to find a job you don't hate that will both pay the bills and allow you the time and space to live as a writer. This is advice no one ever gave me when I was starting out and if I'd known it was going to take as long as it has to start getting noticed, I would've looked different ways to support myself in the meantime. And by "meantime" I mean yesterday, today, tomorrow...

A:  If you're in LA June 2-4, go see Cry, Havoc! at the Veterans Center for the Performing Arts: http://govcpa.com