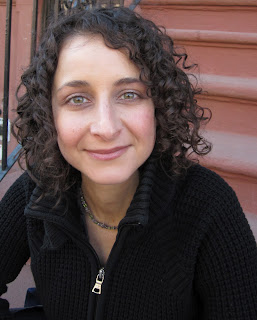 Q:  What are you bringing to the Orchard Project?

A:  I hope to finish a draft of Rocket Song, which is inspired by Patti Smith's book "Just Kids". The play is about a singer/songwriter duo and incorporates a lot of original songs and music, which is not familiar territory for me, so the writing of this piece has been an exciting venture into the unkown.

A:  I'm working on a couple of plays, both in very nascent stages, that I'm writing under working titles The Bet and Brothers. The first is very loosely inspired by Chekhov's short story of the same name, and the second is about a pair of Iranian brothers who are living in England circa 1950 and the Iranian-American woman who tries to write a play about them in America circa now. I'll work on one of these scripts in the Fall of 2012 when I'm in residence at Oregon Shakespeare Festival's Black Swan Lab. And, I started writing my first feature length screenplay recently, which is proving to be a thrilling ride. I also just finished writing fifteen pages of what I'm pretty sure is the beginning of a web series called "Under Appreciated".

A:  When I was seven years old (or perhaps five, or six), I became aware of a thing called Christmas wherein children receive toys for no apparant reason by one Santa Clause on a day in late December. We had no such day at my house, so I set about to correct this injustice. I called in the cavalry in the form of my best friend, Courtney, who came over to tell my parents that there should be a tall green tree in the middle of the living room, and they should buy toys and wrap them up and place them underneath said tree in the middle of the night while my sister and I were asleep. And the next morning, we would all wake up, go to the tree, note the presents and thank Santa Clause for the bounty that my parents had supplied. Courtney instructed us not to acknowledge that my parents were the real givers of these delights, for that would "mess the whole thing up". So, we went to wherever you go to buy a big plastic green tree (the same tree we would re-use for this event for the next ten years) and brought it home. Courtney came over to help us decorate, which seemed more like a chore than a delightful family event. And there it was, in the middle of the living room, Christmas. I patted myself on the back for a job well done, and went off with Courtney to eat pixie sticks and watch Jem and the Holograms, or Knight Rider, or both. I can't remember what I got for that first year of Christmas, but I remember the pride I felt for having ushered America gently into our fray without dismantling the household my parents had worked hard to build. I think that explains a bit about who I am as a writer and as a person. I like to bring people new perspectives, new lenses with which to see the world, but I won't ask you to toss the ones you already have.

A:  Does anyone answer this question with anything other than something having to do with money? I'd make it less expensive to produce plays. I'd make more opportunities for production for all the plays that are developed into a state where production is the next logical step and then get forgotten because there are a fifty plays vying for three or four emerging writer production slots. Being in production is the way a writer hones her craft; it's how she learns how her craft is different from another writer's; it's how she completes the journey of her authority over her voice and her story, and it's also how she learns to let go of the play. And I'm actually a firm believer in developing a play, as long as it's being developed towards production. If I could change the fact that so many playwrights find their plays lingering in post-development purgatory, I would.

A:  Polly Carl is my most recent theatrical hero. She wrote this, and in writing that she put her finger on why I feel so underrepresented in the world that supposedly embraces me and my voice. She also put her finger on why it's so difficult to get established institutions to shake off their pre-conceived notions of what journeys their audiences are willing to take. I read her post and felt like the conversation I'd been waiting for us all to have had finally begun. Other heroes include, but are not at all limited to: Edward Albee, Anton Chekhov, Caryl Churchill, John Guare, Naomi Iizuka, Sarah Kane, Lisa Kron, Simon McBurney, Lynn Nottage, Lisa Peterson, Harold Pinter, Wallace Shawn, Sam Shepard, and on, and on, and on.

A:  I'm excited by theater that shifts my heart from whatever position it's in to a new one, while simultaneously taking me on an intellectual journey through a world that vibrates with all the realness of the one where I live, but presents a new paradigm for living that I've never thought to invent before. That kind of story can take the shape of a monologue play on a bare stage, or it can be an athletic event - if you make it bold and specific and scary and funny and thrilling and enervating and brave, then I'm all in.

A:  Write. Keep writing. Write more. Every play is a building stone, and you are making a castle. Read. Read plays. Read novels. Read poetry. Read the news. Apply to things. Apply to things repeatedly.