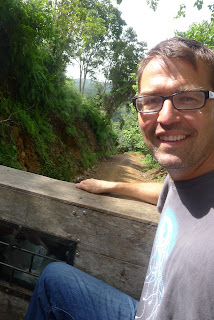 A:  It's a comedy called "Stand Up For Bastards". The jumping off point was Ralph and Montgomery from the movie "Fame" trying to make it after high school, but it has mutated into something else entirely. I'm having fun writing it.

A:  My father gave me his toy train set once. I quickly found that the fun part was making the train reach top speed then watching it careen off the track when it hit a curve. Before long, I figured how to unhook the transformer that powered the track, and I discovered that if you plugged it in and touched the bare ends of the wires together you would get these very gratifying sparks. And then, you could steal your sister's Barbie doll, pop its head off, turn off the lights and make sparks over her reclining plastic body. And when you did this you would say "Life! Life! Give my creation life!" But you would have to whisper it, otherwise your Mom might burst in to see if you were playing with yourself. Eventually, your sister would show up and get mad at what you did to Barbie.

A:  I guess I wish that more people would take a chance and get involved with it. To me, theatre has always been less about the entertainment and more about the experience of doing it. In any capacity. I'm addicted to the sense of belonging that theatre creates in those whose get involved. It changes people in ways that are both subtle and profound. It creates a temporary autonomous zone, where rules of space and time are broken, bent, reshaped. Where people try on new personas. Where technicians operate heroic intensity and purpose. I love it. I only wish everyone would have a chance to truly taste it.

A:  I have a fondness of Arthur Miller. I really love how he will take an issue and have the guts to say "This is wrong! Look at this!" all while telling a really absorbing story. I also have to say that Robert Wilson blew my mind during my college days. I did a paper on him and it really expanded my notions of theatrical possibility. Also Christopher Bayes! He is so freakin' funny! Making funny freaks of us all! More beauty! More funny!

A:  I like theatre that catches me by surprise. I feel like much of theatre right now is disappointingly consistent in it's socio-political content, so when I see something that violates the current conventions, that's always cool. I like theatre that has guts. I probably like that most of all. Whether it's funny or serious, courageous theatre is always something that I hope to see. And make.

A:  Write and write what you enjoy. But even when you don't enjoy it, keep writing. Tell your internal critic to shut up. Share your work when you are ready to (not before), and share it first with people you trust. Then get it out there!

A:  I have some things in submission currently and a project on the horizon, but nothing plug-worthy yet. Soon! Stay tuned!
Posted by Adam Szymkowicz at 6/12/2012 07:10:00 PM