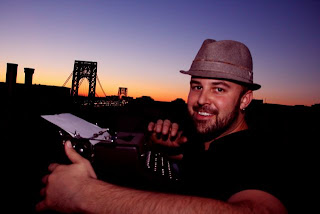 Hometown: I grew up in Milwaukee, Wisconsin in the 80's. We lived near a forest in a neighborhood called Bay View, which is just off of Lake Michigan: I spent my childhood climbing trees, diving off the back of sailboats, chasing fireflies, and dreaming big. I couldn't think of a better place to grow up.

Current Town: I live in Washington Heights, in Manhattan. Instead of walking my dog through the forest I take her on adventures through the uptown urban jungle. In addition to being a playwright I'm lucky to work as a travel writer and photographer, I often find myself writing late at night in the great European capitals.

Q: Tell me about The End Of Days.

A: I've always been fascinated by the quiet and human moments that happen during extraordinary events. The End of Days is the story of a travel photographer who becomes terrified the world is going to end. He finds himself in New York City on the last night of the End of the Mayan Calendar and hunts down the girl he's supposed to be with. My play is a dark love story; a response to the question, if the world is going to end tomorrow, who would you want to spend your End of Days with? The End of Days will be performed at the Soho Playhouse as part of the New York International Fringe Festival. Terry Berliner is directing this new production featuring Adam David Thompson and Libby Winters. Chris Eleftheraides, Maribeth Fox, and Jonah Chmielewski-Fox are the producers. Jonah, our executive producer, is two-years-old and he's quite demanding.

A: My next play, 17, is about four teenage boys who go on a backpacking trip on Isle Royale, a remote island in Lake Superior. I additionally have three other plays baking in the oven and two television pilots on the cooling rack. When I finished graduate school, a good friend approached me about collaborating on a book that's been keeping me busy. I'll be in Sweden next week taking pictures and building editorial content about a number of events in Stockholm, then August will be all about the Fringe Festival.

A: My family didn't have a lot of money growing up but we always used to travel extensively throughout my home state. I think the landscape of Wisconsin and the Great Lakes influenced me tremendously. I remember going up to my family's farm in Ashfield, near Lake Superior and reading Steinbeck by moonlight on my farmhouse my great grandparents built. My family used to rent a cottage up in the North Woods near Verna Lake in Minoqua and my sister would bring suitcases of books to read while we listened to the loons on the lake. Whether we were hiking and rock climbing in Devil's Lake or running between ancient Native American burial grounds in Aztalan, I was always listening, collecting stories, and experiencing nature and local tradition wherever I happened to be. I recently went back and read Goodbye, Wisconsin, a novel by my relative Glenway Wescott, and I got nostalgic for the Wisconsin of my childhood. I feel it was the ultimate launching pad for me to experience and take note of the world around me.

A: I have a pretty experimental background but I'm completely obsessed with realism. I would like for writers to take care of their audience more. I'm all for spectacle, glamour, and mystique but I think theater fundamentally should tell a story with a beginning, middle, and end. There's plenty of room to play within those parameters, but I'm drawn to going to see plays by writers like William Inge, Arthur Miller, Eugene O'Neill, Thornton Wilder, and Lanford Wilson because I feel as if I'm constantly learning and gaining insight about life through their masterful storytelling.

A: I have been blessed to learn from some extraordinary individuals. I moved to New York to study theater performance with the late, great Lawrence Sacharow. Larry was without a doubt the most influential person in my career as an artist. He got me hooked on Anton Chekhov and encouraged me to study and learn from the great Russian dramatists and writers and introduced me to the work of Jerzy Grotowski. In 2000 he brought me to Italy to dig deeper into experimental and physical theater by studying at the Work Center of Jerzy Grotowski and Thomas Richards, with Natalia Federova of the Moscow Art Theatre, and at Ellen Stewart's LaMaMa-Umbria. Larry's passion and devotion to theater and the arts reminds me I can always work harder and do better. My real life heroes are, of course, my boyfriend Chris, my family, and my circle of friends. I would do anything for these people, and want to write great stories to share with them and everyone.

A: I'm excited about all kinds of theater. I'm always impressed by the work of Moises Kaufman and the Tectonic Theater Project. I additionally loved David Cromer's production of Our Town a few years back and could have seen Tracy Letts' play August: Osage Country a hundred times. In New York, I typically love the programming at The Atlantic Theater Company, The New Group, New York Theatre Workshop, and Second Stage Theatre. As much as I'm a "traditional narrative junkie" I'm always blown away by the work of more experimental directors like Anne Bogart and Ivo van Hove. I also enjoy going to spectacles like Fuerzabruta and De La Guarda because there's something so ritualistic and expressive about these works that grabs you by the core and forces you to wake up.

A: Writers obviously need to set aside a significant amount of time to daydream, write, and read each day but downtime is just as important. I've always been inspired by Ernest Hemingway, F. Scott Fitzgerald, and the "Lost Generation" of expatriate writers from the 20's because they lived life to the fullest and were still able to generate a ridiculous amount of material. Get in the car and drive somewhere you've never been, talk to strangers, grab drinks with friends, immerse yourself in nature, wander around in museums, and expose yourself to all kinds of other artwork. Most importantly, take time to take care of yourself so you can be creative and present with your writing and in the room.

A: The End of Days will be performed at the Soho Playhouse from August 15-25. We only have five performances: Wednesday August 15 at 5:30pm, Sunday August 19 at 7pm, Thursday, August 21 at 8:45pm, Wednesday, August 22 at 7pm, and Saturday, August 25 at 5:15pm. Tickets are available for $15 in advance by visiting the FringeNYC website here: http://www.fringenyc.org/basic_page.php?ltr=E - just scroll down to my show and select the day you can make.

I will also be participating in two extraordinary playwright happenings in August: the Write Out Front Project, inspired by Micheline Auger, and The 31 Plays in 31 Days Project. If you're in the New York area, be sure to come to see the work in New York Madness. I'm proud to be a Unit Writer with this group of daring writers who present strong and consistent work with guest artists at their monthly events.
Posted by Adam Szymkowicz at 7/26/2012 01:32:00 PM