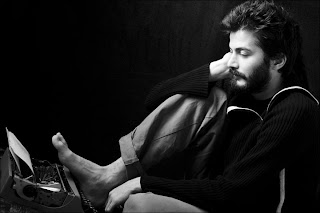 Q: Tell me about The Eyes of Others.

A: The main characters are two men that are going everyday on the same square during their lunch breaks. There they are watched by an anonymous Voyeur. They are kind of white collars, but not exactly.

It’s somehow absurdist work, but still very contemporary. I really like the Theater of the Absurd and I believe this was one of the reasons for writing it. Two months ago I found on my computer one of the first drafts of the beginning of the play with notes about the thoughts I had. It was something completely different from the final draft. I like the idea to believe in your characters and leave them to lead you through the play.

A: My last play “The Alien” won the contest for Bulgarian play of the Absurd in Blagoevgrad. I have to make more revisions, before the production and Angela Rodel already agreed to translate it into English. I have some ideas for a new plays. I was thinking that maybe during my stay I will write the first draft of the next one, but I simply don’t have the time. My second novel is also waiting. It’s ready and I’m waiting for an answer from one publishing house. If they like it, I have to make some revisions, but in general it is ready.

Q: How would you describe the Bulgarian theater scene?

A: It’s completely different, I mean the system itself. We have repertory theaters which, I realize now, is totally different way of working. There are many good productions, and more that are not so good, but this is the natural order of things. I of course, have favorite directors. As a theater I like the work of Sfumato Theatre, that is small but not in matter of spirit and art.

A: The “star system” for me is not so important. Even in Bulgaria a lot of people are going to a production only to see the star from some TV Series. But actually the theater is something organic. I don’t believe there are “big” or “small” parts.

A: In matter of “theatrical” actors, they are in Sofia, I’ve only seen American actors in movies. As for playwrights: Chekhov, Pinter, the Absurdists, Maeterlinck, Strindberg, Albee, and many more. These authors were the first that came in my mind. In matter of theatrical directors, I mean with productions that I’ve seen, they are once again in Bulgaria. I also admire theatrical gurus like Grotowski, Peter Brook… In Bulgaria, excuse me for the repetition, the biggest hero is Sfumato Theater, who is showing to the Bulgarian audience a “different” theater.

A: I will escape easily with the answer: well-made theater. That is something that can’t be explained and is different for everybody, depending on their conception of theater. It can happen the theater that is well-made for me, and speaks to me, can’t do the same with other people.

A: I’ve always believed there is only one formula and that is: to write. Don’t be scared that the things won’t work, write down your ideas on the blank page. Dive in the world of the play. You can learn it only in the process. Reading plays and watching productions also can help, but the first thing is to write. It is very funny, because I just had the first production in the National Radio in Bulgaria… The radio-play is called “Workshop” and the action happens during playwriting workshop, and there is obviously this character, who teaches the others and he is repeating this a lot, that the only way is writing.
Posted by Adam Szymkowicz at 8/28/2012 09:08:00 AM