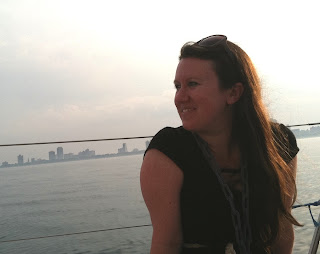 A: Guerra: A Clown Play - a show that I developed with Seth Bockley and La Piara (a clown troupe based in Mexico City). We have spent the last year between Chicago and Mexico City creating the show and are now polishing it and taking it to a few international festivals.

Everything Is Illuminated - I'm directing an adaptation of the novel at Next Theatre in February 2013.

Dog & Pony Theatre Co. - The company that I co-founded with Krissy Vanderwarker. We're currently working on four projects in various stages of development, the ones that I'm entrenched with are a re-envisioned re-mount of As Told by the Vivian Girls, a devised piece about outsider artist Henry Darger that we created in 2008; a new play about the relationship between Richard Wagner and Ludwig II; and a piece about the Dill Pickle Society, a bohemian hang out that existed in 1920's Chicago.

Q:  Tell me about the process by which you devise something.

A:  It's really good for me to spell this out as I'm trying to solidify my process after a number of years of trial and error. The process is different with each project, partly because each piece I've devised has been so different, partly because the collaborative team varied on each project, and also the process shifts as I learn what works and what does not. Generally, I like to spend a year researching the topic of the show. This research time is usually spent passing books and other sources around with my collaborators. I have co-directed all of my devised work, and co-written it as well. So, it's never a process that is not immediately shared.

After or during the research phase, I generally create a map of the show. I'm a visual learner, so this is often more for me than anyone else involved in the show, but it tracks the main events of the play and charts the journey. For "Vivian Girls" this map was our script. Each character had different color that tracked their journey and the major plot points were indicated by specific Darger paintings. Ever since that show, I've been creating maps for each show I work on - sometimes for others to see, sometimes just for me to have a touchstone for the piece at home.

Then, there is a workshop phase. This has taken various forms over the years - sometimes it's weekend workshops with script pages being shared with actors and then, writing/developing sessions without actors in between workshops. Sometimes, its ensemble building and movement exploration with no text in the room for a weeks at a time. Sometimes its an extension of the rehearsal process with found text, everyone writing and movement work all being shared. Most recently, we worked on The Whole World is Watching, a play with music, and realized that the music was too hard to play around with in workshops, it's such a technical skill to find harmonies and set rhythms, so we put that off for the first week of rehearsals and just spent workshops on story development. Generally, during workshops actors are not cast in roles. They know that they'll be in the show, but for workshops everyone plays every part. Side note: I stole this from the Royal Shakespeare Company's development of Nicholas Nickleby. They asked actors to sign on to the project, not a specific part, and that way the play was #1 in the room and everyone was working in service of that during workshops. I thought it was a great idea. And it's worked really well, especially to help the ensemble's bond. No matter what, the workshops are all of us exploring the subject matter and story together. I try to include designers in all workshops. Also, workshops are active dramaturgy time. Everyone is doing research assignments and sharing with the group what they've learned by leading exercises that relate to the dramaturgy.

Then, the rehearsal process follows. This has been as long as four months and as short as four weeks. During this time, we try to lock in the scenes and text. Lately, I have been interested in building the script as we work as a separate document from the devising process. So, we end up with both a production and a script. They may be slightly different from one another, but that way we have a record of what we've created, regardless of the specific production restraints we faced, and lock in any language that is non-negotiable.

Most recently, I have also made a priority of more rehearsal time after a couple previews. So, we preview for a weekend, then head back to the rehearsal room for a week and keep re-working before more previews. Often, the audience adds a whole new understanding to the devised work, and this time is important to refine and shift based on audience reactions.

A:  When I was 15, I applied to be a foreign exchange student. I left on my 16th birthday to Italy because I was convinced that the world must be bigger than Tustin, California. When I arrived, I was told that my host family could come and pick me up in Rome, but I insisted on taking the train alone to Perugia (their hometown), and meeting them there. I transferred trains on my own, using my week-old, broken Italian to get myself to the right place. I arrived at the train station in Perugia and disembarked, so proud that I had gotten from California to Perugia on my own. I sat for two hours waiting for my host family. They didn't come. They didn't come. I tried to use my Italian to find out if I was in the right place, and yes, it was Perugia. Finally, I broke down and called California. My parents were out of town, so I called my best friend's parents from across the street. I was now in tears. I was lost in a foreign country. I'd never traveled out of North America, and now I could not find who I was supposed to meet. My friend's dad calmly asked me, "Have you asked if there is more than one train station in Perugia?" This was the answer. I found out that there two stations, was able to call the other station, they paged my worried host family who had thought that they had lost their new American child. They came and found me, and we were able to laugh off our collective panic in how we met. I guess, this typifies me in a few ways. First, I needed to travel and live outside of the US at 16, and I still need it today. I needed push myself past what was comfortable and try to do things on my own. I can be fiercely independent sometimes. But also, I need collaborators. I don't problem solve on my own, I need to collaborate with people I admire and trust. I rely on them. And sometimes, I fail. I learn a lot from taking big risks and occasionally failing.

A:  The rate at which we innovate. I think we're too slow to push the form. Our audience is dwindling, and we don't fight hard enough to push the form and reach a new audience.

A:  Theatre where the audience relationship with the play is part of the experience - for instance, Punchdrunk, Shunt Collective, the National Theatre of Scotland, Pig Iron, The Hypocrites, Frantic Assembly, Kneehigh. Also, theatre that includes movement as a vocabulary with which to tell stories.

A:  Don't be afraid to write protagonists who aren't a version of yourself. Develop your own method to create new work, there's no right way to do it.

A:  Go see - The Strange Undoing of Prudencia Heart by the National Theatre of Scotland touring around the country, Failure: A Love Story by Philip Dawkins at Victory Gardens in Chicago, Guerra: A Clown Play at the Tricklock Festival in Albuquerque, New Mexico in January.
Posted by Adam Szymkowicz at 10/30/2012 12:08:00 PM