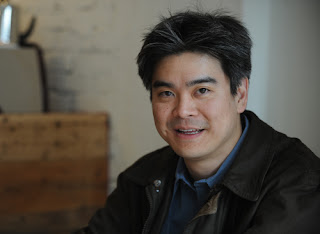 A:  The most immediate thing chronologically is a play called JESUS IN INDIA that is going up in February with Ma-Yi Theatre Co at the Theatre at St. Clements. It was produced at the Magic Theatre in San Francisco earlier this year, and I'm doing some big retooling for this production. I also have a play for young audiences that was commissioned by Children's Theatre Company in Minneapolis called THE WONG KIDS IN SPACE CHUPACABRA FREAK SHOW BATTLE GO! that I'm workshopping, and a play about an all-Asian country band that was initially developed in the Soho Rep Writer/Director Lab that I'm working on with NAATCO (National Asian American Theatre Company). In the earlier stages is an EST Sloan commission that looks at the inventions of Benjamin Franklin as a sort of precursor to his invention of America.

A:  I like to think that any of us in fact CAN change lots of things about theater, though of course some things are harder to change than others. For me, the thing I spend most of my time and energy on has to do with just trying to make the lives of playwrights better. The challenges and obstacles that writers face are enormous and well-publicized elsewhere, and so for my day job (as a program director at the Lark Play Development Center), the work I do is about trying to provide resources - through artistic programs, community building, advocacy or financial support - that improve the type of livelihood that writers can expect to lead. At the risk of sounding sanctimonious about it, I also have to believe that what playwrights do is of incredible value to the world, as a way for us as a culture to explore what it is to be human in the way we live now, and create a conversation for a society to confront itself in the present tense. So by helping to change the way we assign value to the writers who generate that living conversation, and by enabling those voices - especially if it can be done with a multitude - is a way of changing the quality of the conversation that we're having in the world. Included in that, of course, are the big questions of who comes to see theater, who has access to it, and so there are a lot more specific things I'd like to change in that regard as well. On that level, I hope that I'm doing my part, because obviously we're all in this together.

A:  Ralph Pena. Mia Katigbak. They started out at a time in American theater (heck, in America) when Asian Americans weren’t just grossly underrepresented, they were virtually invisible, and so when they built these companies like Ma-Yi and NAATCO to build on the movement started by East West Players and Pan Asian Rep, they were deciding that they would not only create their own opportunities (which they did) - they were also going to lay the foundation for subsequent generations of Asian American theater artists to have a permanent seat at the table. It’s really inspiring to me, and I feel really lucky to be able to count them as mentors, peers, collaborators and friends. They constantly remind me of some really huge things: that nobody's going to hand anyone anything, that we're individually capable of building our own opportunities, and that nothing we ever do is divorced from a larger community. The effect of that has been really palpable, and you still see Asian American theater artists starting from scratch and building their own companies, like what Welly Yang did with Second Generation, what Qui Nguyen did with Vampire Cowboys, what Young Jean Lee did with her company, and what this incredible generation of Asian American playwrights is doing every day. I feel like we’re in a really exciting and pivotal time in Asian American playwriting, where a great diversity of material is being generated, developed and produced; it feels like a movement, and my personal heroes of that movement are Ralph and Mia, who not only helped to build the infrastructure for it back in the day, but continue to be at the forefront of that work - as artists themselves, and as leaders who support those voices in visionary ways today.

A: I've always preferred ambitious failures over tidy successes. In general, I think of overreaching as a virtue and underreaching as a waste of time, so most of the time I like things that are really raw, uneasy, and difficult, but strive for something noble and complex - whether it's completely achieved or not. I tend to be allergic to "slick". I prefer theater that asks really difficult questions, rather than the kind which answers easier ones.

A:  I can't pretend to really know what might be useful to anyone else, but the best piece of advice I ever got for my own personal shit was in fact playwriting advice that has ultimately become really useful life advice as well. My playwriting teacher at Indiana University, the great Dennis Reardon, once said that when you sit down to write a play you should have absolutely everything entirely mapped out in your head - from beginning to middle to end, to know where you're going and how to get there, to understand what you want to say and what it all means - but that once you sit down to start writing, you should completely let go of all of it and absolutely under no circumstances follow that map. I think it's similar to the way actors work - they have an "objective", they prepare everything they need, including research, character work, an accent or something physical, but then once they're in the scene they let go of all that preparation, trust that they know what they're doing, and then try to be present and reactive to whatever happens organically. It's been useful to life in general in that it forces me to think about what I want, short-term and long-term, but also forces me to be ready to change my mind and be nimble enough to deal with whatever surprises might come along. Because a writer's life (or any freelancer's life, for that matter) can feel so random and shifting, and it's so easy to fall into the trap of being reactive to what presents itself, rather than focused on your own trajectory. So it's good to constantly be rigorous about what it is that you actually want, on a grand scale and a micro scale, so that when things happen to put you off course, you know how to get back to your shit.

A:  Please come and see Ma-Yi's production of JESUS IN INDIA, directed by Daniella Topol at the Theater at St. Clements, February 13-March 10! ma-yitheatre.org