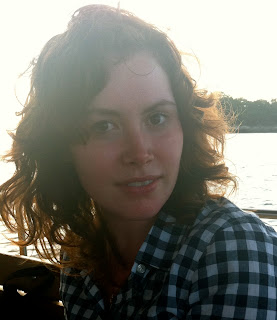 Q:  Congrats on being the new P73 Fellow. What do you plan to work on with them in your fellowship year?

A:  Thanks very much! I'm working on two plays with the support of Page 73. One is currently untitled; it's about a group of writers at a women's magazine, one of whom has just learned she only has a few months left to live. It's about how the things that are supposed to be important in a bright young women's life--sex, good looks, romance, wit, small adventures--can melt when you shine a bright light on them.

The other play is called Believeland, and it's a big melting pot about my complicated relationship with my hometown. The play is organized, if you can say that right now, around the poetry of d.a. levy, an artist who wrote about Cleveland from a place of deep love and brutal honesty. I can only hope to do the same.

A:  The summer between fifth and sixth grade, I decided I wanted to start reading Stephen King, so I picked up IT at the library before my family's annual trip to our cabin in upstate New York. I figured it was a good one to start with, since the jacket said it was about 11-year-olds. I plowed through the book, reading it at night when my parents were out canoeing and I was all alone in a creaky old dark house. And at the same time, I wasn't quite done being a little girl...my mother and I were still reading aloud to each other most nights, we would have been deep into the L.M. Montgomery oeuvre. I started living in a world where being a girl who thought her stuffed animals had feelings and wanted to be Emily of New Moon could exist alongside this growing knowledge of some of the darker, grimier, ookier, scarier stuff that life has to offer.

A:  Can I change two? I'm gonna go ahead and change two. First, more women writers produced in the "big" spaces--Broadway, the big deal subscriber off-Broadway houses, big regional theaters. I want it to not be news that a woman has a play on Broadway, or that a theater's season is half (or more!) written by women.

I also want theater to be part of the, for want of a better term, pop culture conversation. Suzan Eraslan wrote this open letter to the New York culture press that is well worth a read (http://suzaneraslan.tumblr.com/post/38323214719/an-open-letter-nyc-culture-press-what-are-we-doing), and it articulates beautifully what I've been feeling for awhile. There is so much gorgeous, weird, fucked up theater happening at all hours of any day, and it isn't a part of my generation's lives and consciousness the way music, film, and comedy are. I think it's a change that's going to have to happen in an evangelical way; theater makers have to keep making noise about our work and what we have to offer audiences.

A:  Paula Vogel, Ken Prestininzi, Deb Margolin, and Frank Pugliese are writers I've been lucky enough to have as teachers and mentors, who I am constantly checking in with, either on the page or inbox. My first playwriting teacher was a wonderful writer named Sarah Morton, she taught Saturday playwriting classes for high school students at the Cleveland Playhouse and she made me want to be a playwright. Young Playwrights Inc. produced my first play ten years ago, thus effectively ruining me for all other professions, and the way Sheri Goldhirsch and the rest of the staff nurture young writers is extraordinary and necessary.

A:  Live in a city where there's a lot of theater, and go see as much as you possibly can of as many different types as you can. Musicals, downtown, big, small, solo, classics, college productions, readings. It's expensive, especially in New York, but it's the best education you can get. The more plays you get in front of your eyes and in your ears, the more you start to realize what your obsessions are. You realize the places that feel like home, and they may be surprising. You want to warm up the space that's left cold by an unsatisfying evening of theater, or you want to start a conversation with a writer who seems to understand you from miles or years away.

A:  As you'll see from my previous answer, I have pretty broad theatrical tastes, I'll see anything and everything if I think it will delight me. I think what I'm responding to right now is theater where I feel taken care of. Not comfortable, necessarily, but where I feel like I'm experiencing something that has been made by a group of collaborators in order to have a conversation with the audience. Sam Hunter's The Whale and the recent Art Party show How the Salts Got Down, directed by Mary Birnbaum, both shook me in big ways. They could not be more different, but they were both shows that made new worlds for the audience, with a love of connection and theatricality that I found incredibly satisfying. Oh, and the Art Party show had dancing. I like having the opportunity to dance and sing along with pop music.

A:  A reading of my play The Bachelors is happening February 11th at NJ Rep. I'll be performing/making people think differently about Katy Perry at the New Georges Trunk Show on February 22nd. And, if you're in Seattle in the Spring, you can see the premiere of my play Tall Skinny Cruel Cruel Boys at Washington Ensemble Theatre (www.washingtonensemble.org.)