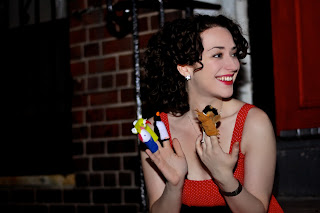 Q:  Tell me about Chosen.

A:  Chosen is a one-act play about cultural pride, racism, family, and love. It is without a doubt the most personal play I've ever written. But it's a comedy! Because I think the most painful stories in our own lives should always be funny to other people.

A:  I'm in the research stage for a few big projects right now, which is a fun and terrifying place to be. One play is a collaboration with Melissa Crespo (the director of Chosen and my spiritual other half). Melissa and I are working on a devised piece together that's going to be really politically charged and personal for both of us. Or at least that's the hope.

And then I'm also moving towards the early workshop stage for a new full-length play commissioned by IVP, a really fantastic group of female performers, co-founded by my childhood friend, Ashley Adelman.

Honestly, I feel very lucky to be so busy right now.

A:  When I was around 9 years old, my parents, my older brother and I all went to see Miss Saigon on Broadway. I don't remember feeling very affected by all the sexy stuff happening on stage -- I just thought all the dancing and noise was exciting. Besides...we had really great seats and it was my 2nd Broadway show ever; so they could have been sacrificing a live goat up there and I would’ve been enthralled. Anyway. When the lights came up during intermission, my mom took a deep breath, turned to me and blurted out ‘honey, do you know what a prostitute is?’ I honestly don’t remember my exact response. But I figure it was the kind of rushed affirmative response that attempts to steer clear of having ‘the talk’ in the middle of Miss Saigon. I think that’s still how I look at theater…the ideas I love to see portrayed on the stage, the taboos I most love to see broken and opened and re-purposed, those are the topics I am least likely to willingly discuss with my mother.

A:  The emphasis on first-runs is a killer. When and why did the branding of a ‘world premiere’ become so important? Given how many Broadway and Off-Broadway shows are revivals, it seems ridiculous to me that new work at the ground level often gets only one shot to it get it right. Bonkers.

A:  I love the Greeks, especially Sophocles and Euripides. So I’m a sucker for writers and directors who don’t just re-translate these classics but adapt them in new, crazy, remarkable ways.  Like Ed Sylvanus Iskandar with his food and his gorgeous stage pictures and his generally jaw-dropping direction of 'These Seven Sicknesses.' And Charles Mee, who would be one of the guests at my dream dinner party.

A:  I want the passion, the risk. I don’t want to see a slice of life, I want a peek at the characters’ most lurid secrets and dreams. I crave magic, and not just in the stagecraft. Get the actors out of their chairs, away from their tables, and give them some choreography or some puppets or some confetti to throw around. I like to leave the theater feeling like I just saw an almost supernatural event in front of me. Plays where the actors sink into the upholstery for two hours do not generally interest me.

A:  Don’t expect all the people in your life -- even the really important ones -- to fully understand what you do or appreciate how hard it is. Because most of them just won't. They can't, and they'll frequently doubt your sanity. So get a therapist and a gym membership and do what you can to surround yourself with people who make you laugh. And don't let anyone tell you that romantic relationships distract you from your work. Because true love inspires. Also, unrelated to that last point, take naps. Lots of naps. Writing's exhausting.

IVP, a great group of gals making theater together. http://infinitevarietyproductions.com/

Corey Pajka, my boyfriend, is also a playwright, and he's got a play coming up in the Midwinter Madness Short Play Festival next week. http://www.smarttix.com/show.aspx?showcode=OLD10 Oh, and one more plug! The New Voices Festival is about to start up at the New School for Drama. The MFA Playwriting thesis plays are serious business, go if you can.
---
Book Store
Books by Adam

Thanks for another great interview, Adam! I love reading your blog and finding out about all of these great playwrights, many I would never have heard about otherwise.