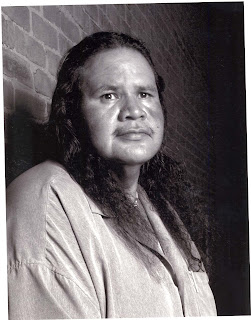 Hometown:  I was born and raised on the Fort Peck Indian reservation located in northeastern Montana. The reservation is often referred to as Assiniboine and Sioux. I’m enrolled as a member of the Assiniboine Tribe. We were the last to sign the Fort Peck Treaty. People will often say how they have never heard of my Tribe, which is fine, because we’ve probably never heard of you. I lived in a small township called Wolf Point. It has a duality of how it was named. I actually mention it in the first play I wrote called, “Sneaky”.

Current Town:  Presently, I live in the home town of the great playwright, Eugene O’Neill, New London, CT. It is a small city. Small in populations but facing the problems of a big city.

Q:  Tell me about Wood Bones.

A:  “Wood Bones” is not your typical haunted house story. In fact, it isn’t about a haunted house. It is about a form of energy that humans have created over the years inhabiting this one space. It is sort of what is left behind. This energy starts to manifest and becomes conscience. Sort of similar to like a  computer become self-aware of itself, a form of artificial intelligence but in this instance an organic intelligence is created. The problem in writing the play was to present a collection of characters that didn’t judge themselves, or the audience would be able to be quick to judge. It is a multi-cultural cast because like America, we are diverse. It is the Native American Tribal communities that bear the weight of these various communities, as does the house energy/spirit character, 121, does in the play.

A:  I’m working on doing a series of rewrites on several one act plays and some poetry. I’ve been wanting to do a collection of poems in an e-book form. I hope to have it done soon. I’ve also just published a short fiction story, Miracle of 12-12-12, that appears in anthology dedicated to the late Native Scholar, Vine Deloria, Jr.

A:  My late mother was what people refer to as an ‘elder’. She spoke with fluency the language of our people, practiced the culture, and nurtured the community and environment, but she would never claim the title, or status of being an ‘elder’. She was very humble. I don’t claim any title. I follow her ways in that I try to be a good listener and observer, as she was. This has been a gift to my skills as a playwright. There are so many people to thank in influencing my development. There are so many relatives and friends that made contributions, what an honor it is to say that to recognize them.

The other element being introduced and rearing its face in a lot of large theater companies is an element borrowed by the Hollywood cousin. They are now determining what is Native, what a Native looks like, what a Native play should be like, what themes are found in Native plays, all this without any experience working or being involved with a Native community. In other words they have brought the “Poses With Hair” make believe Indian onto the American Stage which is a dangerous precedent.

I don’t speak for all Native Tribal theater artists. These are my observations and there is room for disagreement. The major factor and final one is; communities. You have to acknowledge and respect the communities which are the catalyst for this wonderful work and yes, it is American, not ethnic or minority. Native Tribal theater is Indigenous, we are not ethnic. American Theaters must begin to respect and develop better relationships with the communities that make up their environment.
Q:  Who are or were your theatrical heroes?

A:  My influences have been diverse. I think the first professional play I saw was a production of O’Neill’s “Moon for the Misbegotten”. It was done by the Montana Repertory Theater. August Wilson’s work has made a major impact on my life. David Henry Hwang’s “FOB and Other Plays”, Philip K.G.s’, “Yankee Dawg You Die,” Jose Rivera’s “The Promise,” Hanay Geiogamah’s “49” and other plays. So many incredible playwrights and plays and theater artists like Lou Bellamy, Hanay Geiogamah, Roberta Uno, the late John Kaufman, Bruce Miller.

A:  Original works are always exciting. New voices means new perceptions. Theater is a means to see the heart of a community. New plays and productions allow people to see something fresh and new.
Q:  What advice do you have for playwrights just starting out?

A:  For any new playwright just staring out I think the most important step is to start developing a community. A play, unlike published poetry or other forms of literature, needs a community to survive. Start making friends with actors, directors, technical directors, stage managers, literary people. You play will start to help in creating that community.

Good interview of an outstanding artist!

432Yes, great playwright,and an outstanding artist .I like him very much.

Yes, great playwright,and an outstanding artist .I like him very much.