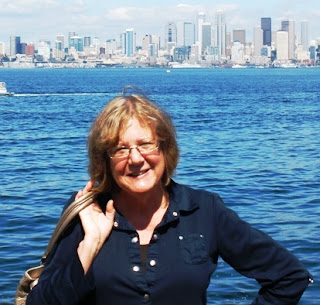 A:  Right this very, absolute-minute, I am adapting My Father's Dragon - a children's book I came across this winter that enchanted me. All of a sudden I started seeing puppets. Crocodile puppets... monkey puppets. That's new for me!

And I am slogging away editing my "Russian-explorer-Otto-Schmidt-North-Pole-Universe-Physics" play And the Universe Didn't Blink. It's about a young girl coming to terms with her father's death. And all that other stuff in quotes.

A:  Grandma Gresio and I played "make-a-believe" from the time I could speak. I probably was about 9 years old when I found out it was "make-believe" and only "make-a-believe" if you had an Italian accent! But you know, I still play "make-a-believe." Every time I sit down at my desk and write.

A:  Getting down to basics - the ticket prices. For someone who has been in theatre for many decades, I have missed many shows because I could not afford to go. In New York City, there were more opportunities to see shows at reduced prices (or free if you were in the biz) than there are in Minnesota. Although it has gotten better.

A:  You are speaking to someone who has had AARP on her tail for a number of years! I have gone through stages.

In my teens and twenties, I did the "soup to nuts" routine of seeing every play I could ... the plays of Shakespeare, O'Neill, Miller, Simon, Albee, Wasserstein, Durang, Wilson, etc.  Growing up in New York City was a playground for a teen who was head-over-heels, wildly in love with theatre. And for $5 - you could  sit in the back row of any Broadway or Off-Broadway show or musical! Can you imagine? I'd babysit on Saturday and take my money and go to a show on Sunday. Almost every week. Who can do that today? I was a sponge and those years were invaluable in helping me create works for young audiences. Anything is possible in this field.  My exposure to so many types of theatre gave me permission to play with my work.

The work of playwrights in the youth theatre field is astounding. The care, the risks, the breadth of the genre just gives me sweet tingles.

A:  I'm a theatre slut. I am as spellbound by a grand tap-dancing number as I am by six actors in t-shirts and jeans spinning a tale in a black box. If you're making theatrical magic, I'm there.

A:  Be kind. It takes a lot of people to bring you work to life. Be kind.

La Bella Cinderella will be part of the Minnesota Fringe Festival August 1-11, 2013. Pure clowning and silliness for the younger set - Cinderella and pasta - in Italy. Grandma Gresio - she's a-smiling.

And my first booked 2014 production: Cap o' Rushes will be produced by East Valley Children's Theatre in Mesa, Az. I am doubly excited about this because I will be going there ... in February 2014. As someone who lives in Minnesota, you can understand why February in Arizona holds great appeal.

I found your web site website on bing and verify many of your early posts. Maintain up the truly superior operate. I just added your Feed to my MSN News Reader. On the lookout for forward to reading a lot more from you discovering out later on!…