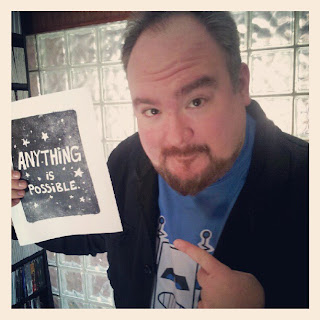 Current Town: I've moved around a lot, but I consider Dallas, TX my home base currently.

Q:  Tell me about Dinosaur and Robot Stop a Train:

A:  I have lately become really interested in old-school Theatre of the Absurd. You know, from the 1950s, with all those post-WWII playwrights like Beckett and Ionesco. They have been on my radar for years, but at the beginning of this year I had kind of a confluence happen. I finally sat down and read Martin Esslin's book. I also started reading some of Ionesco's book Notes and Counternotes (man, Ionesco originally did not dig theatre at all). I also saw a production of THE CHAIRS for the first time.

My good friend and colleague, and great local actor, Jeff Swearingen, performs in a longform improv duo with me. We've been kicking around ideas for a while to do some sort of two-hander together. These things all came together and I sat down over a two-week period and wrote DINOSAUR AND ROBOT STOP A TRAIN. It is my sort of contemporary take on Theatre of the Absurd with broad comedy, a bit of vaudeville, weird situations, that tinge of the tragic and most of all a flat-out dismissal of realism.

I use a dinosaur from the past and a robot from the future to explore the nature and wonder of purpose. It fits in nicely with the rest of my work, which always kind of touches on misfit characters who are totally out of place.

Q:  Tell me about your comics.

A:  Oh, thanks for asking about that. I used to draw comics when I was a kid. I wanted to grow up and make comics like Charles Schultz or Gary Larson, having them appear in newspapers through a syndicate. But I got into theatre in high school and the drawing sort of fizzled out. Besides a handful of comic strips published while I was in college, I let it totally fall by the wayside. Then in 2010, after reading a bunch of webcomics, I realized I could just self-publish on the internet. So, I launched a series called DONNIE ROCKET TOASTER-FACE. It is about a sort of Every Man character who, inexplicably, has a toaster for a face and rocket pack on his back.

I was doing a comic a week for the first year, but it has slowed to about one a month. I also recently began an experiment I'm calling an improvised comic. I sit down and just draw directly on the paper without any pencil roughs and without knowing where the story is going. It has been pretty fun so far. I think, indirectly, they have both helped my playwriting.

A:  I'm ramping up for DINOSAUR AND ROBOT STOP A TRAIN. I'm producing it myself with my company Audacity Theatre Lab. I've also started writing a new solo show I hope to perform at fringe festivals next year. It is about this guy with anger issues who is haunted by a mysterious, eternal goldfish. I'm super excited about it.

I've also just started really trying to get my stuff out into world lately. I've been writing for years, but I'm just starting to dip my toe into things like fellowships, residencies, publication and all those other business things playwrights do in this country to get their work out there and part of the national conversation. I'm attending the TCG National Conference this year for the first time. It is here in Dallas and I'm excited about that.

A:  This is a surprisingly difficult question. I can't remember stuff for crap. Oh hey, I was a birthday party clown when I was in my early teens. I called myself Frump. I only did a few parties and then some shows at the public library, but looking back on it, it combined a bunch of things I use all the time now... creating original material, producing the show myself, taking into consideration the playing space and audience, even performing solo.

A:  I'd like to see a lot more self-initiation. More creative rather than strictly interpretive artists. I had lunch with an actress friend a few years ago. She was pretty experienced and was talking about going on a slew of unsuccessful auditions. I asked her what she wanted as an actor and she said "to get jobs." I asked her if she considered herself an artist. She did. Then I asked what she wanted to say as an artist. She stared at me. What I meant was artists are people who express themselves in the world and as an actor she did this by choosing what roles she played, what themes and stories she championed. It was the first time she thought about her acting in that light.

I don't think playwrights should have a monopoly as the only creative, instigating artists in the theatre. I think directors, designers, actors and so on should create first hand. By that token, I also think playwrights should take full responsibility for their work from time to time and see it through all the way from idea to completion, rather than handing it off for others to do and interpret.

A:  I dig theatre that pushes the form, but doesn't take itself too seriously. I also get excited when I see really full-throated, super-committed, leave-it-all-on-the-floor theatre that has something genuine to say.

A:  I'm kind of just starting out myself. Here are a few that have proven useful to me: Keep a notebook and don't let any idea - great or not so great - get away. Instead of writing what you know, which you'll do anyway since you are you, write the kind of theatre you want to see and experience. Take responsibility for your own work and produce it yourself from time to time. Get interested in the history and theory of theatre. See more theatre than you read. See a lot. Surround yourself with kick-ass collaborators. Don't be discouraged when the realization hits that it is really hard work to create theatre from scratch.

A:  DINOSAUR AND ROBOT STOP A TRAIN premieres at the 2013 Festival of Independent Theatres, June 7-22. Info HERE.
DONNIE ROCKET TOASTER-FACE and other comics at DribbleFunkComics.com
And, my website is a good gateway to what I'm up to at any given time... www.BradMcEntire.com

Cool interview of one of our Dallas homies!