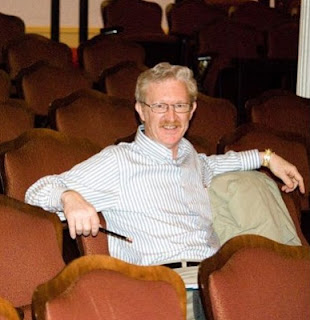 A:  On being America’s oldest most-promising playwright.....Nah. As you know, things go in cycles--some years you plant, some years you harvest. Last year (2012) I had a couple productions and readings. This year so far has just been about the writing. Recently finished two scripts which have hung around for awhile--a dark comedy about the theatre (is there any other kind?), and a drama about marriage (is there any other kind?)--and then made the mistake of opening a computer file with 26 pages of something else I started years ago and would like to complete. Also have a lot of work to do this summer on a long-aborning project for Peter Ellenstein and the Inge Center, which will keep me from fixing an even longer-aborning script that has sat idle since a reading last December. None of these are getting productions, you understand--not yet anyway--but staying busy is the 50% I can control. You have to realize that I’m very much a regional theatre writer--that’s where all my work has been done, plus I don’t live in a place with a huge theatre community, and while I’d love to talk about my play over coffee on Eighth Avenue, the airfare is prohibitive--so whatever my network is, it’s far-flung and for the most part electronically-personal. That can make it difficult to stay motivated, let alone get work on stage, and I always say I’m about 6 months away from giving it up. The fact that I’ve been saying that every 6 months since late in the Reagan administration is thanks to that small-but-choice network that keeps asking “What are you working on now?”...., Anyway, because they won’t let me off the hook, and because I keep getting ideas (damn it), I’m starting to feel like I might finally know what I’m doing, and should probably shut up and get on with it. But only for another 6 months, and then I’m out.

A:  Sometimes I want a program bio that reads, “Richard Hellesen was not born into a family of struggling yet determined artists, who did not take him to Broadway shows as a child where a chance meeting with Arthur Miller did not lead to his graduate study at Yale School of Drama not.” I was merely a small, shy, red-haired, middle-class kid living in a California suburb, with a good childhood, a state college education, who never even saw a professional play until I was in high school. The only hint of my future was a love of words--lots of them--and an inclination to pretend, which were the refuge and eventual release from my shyness, and are still about the only skills I have now that I’m a small, less-shy, grey-haired, middle-class kid living in a California suburb. That and the fact that nobody--nobody--works harder than me (nobody!) in rehearsal. Probably out of fear. OK--love and fear--there’s the story: in junior-high I was the guy that somebody would engage in conversation, while unbeknownst to me somebody else was crawling behind me. And then the first guy would push me over backwards. Writing is engaging in the conversation--which, thank God, I had teachers encouraging (to the point of producing early efforts), and I learned to love being in a room with actors and in the back of the theatre with an audience, which is the only reason to write plays. But I’m also pretty sure while I’m standing there that somebody is crawling behind me....

A:  I’m guessing the other 500+ people have covered many of the things I’d change, but OK. This will sound self-serving, being (as I am) in my incredibly late 30s--but since all playwrights are somewhat self-serving anyway (“produce anybody else but me!”, said no playwright ever), here goes. It’s the same thing I’d change about American popular culture in general: its tendency to overpraise the new, the young, the “hot” as the salvation of the art, at the expense of artists who are none of the above--and then repeat the process about every half-generation. Which is not at all to denigrate young talent; merely to say that if art is a lifelong journey--and I believe it is--then there are things you do not know, questions you cannot ask, abilities you haven’t yet refined, until you’ve hiked a pretty good distance up the mountain. It’s no challenge, in my opinion, to find people who want to write plays when they’re 17 or 27--they’re always there, and they’re happy to get the theatrical equivalent of pats on the head and doggy treats. The challenge is to make sure they (and I mean any writer willing to walk the walk) are still wanting and eager and able to write for the theatre when they’re 37, 47, 57--the decades when the very life that’s giving you something more and deeper to write about runs repeatedly into abundant reasons to quit. By all means, we absolutely have to nurture a younger generation of artists--that is indeed the future, and certainly why many of us teach. (OK, pay and benefits too, but I digress...or not...) And I know that professional theatre is always about who gets to play ball and who doesn’t, and who decides. But some great works only come with time, and I would regret our losing--or neglecting--the means to make them happen. (Let’s see, “The Vikings at Helgeland” or “Hedda Gabler”? Anyone? Anyone?)

A:  Strangely, since I think I’m fairly conventional, I admire playwrights with a vision of their own--who kept after it, often imperfectly, regardless of the opinion of others, regardless of success or failure, over their entire lives, struggling to create what they had to create because that’s who they were. And while I know this applies to many of my contemporaries, for some reason I have a hard time thinking of them as heroes just yet, though I do love and admire them. Maybe because my degree was in theatre history, I lean toward the past--and that includes writers whose end of the theatre I might be lumped into, those who are about as far away from what I write as you can get, and in both cases people who wrote some things I don’t even like. Ibsen. Chekhov. O’Neill. Beckett. In my adult lifetime, August Wilson above all. I’ll never get closer to them than sitting at a very great remove from their feet, but they remind me of the highest aspirations in a craft that I’m swamping around in--and that’s plenty.

A:  Funny: I don’t think in terms of being Excited! about theatre anymore--I think in terms of being moved. Which I’m sure says more about me than either theatre or excitement, and anyway I suppose being moved is a form of excitement, so.....I enjoy anything that moves me, intellectually and/or emotionally--I don’t care if it’s classical, contemporary, word-based, movement-based, drama, comedy, musical, realism, non-realism, intensely kinetic or intensely literary. Whatever, and by whomsoever made--as long as it’s truthful. Sometimes I think we get so amped up about form that we’re willing to give content a pass. I did literary management for a number of years, and the most irritating plays I read (as with any number I’ve seen produced) were the ones that were basically very slick and well-written lies--either something somebody wrote because they were trying to show how clever or cool they were, or because they had a Point to Make and were going to By-God Make It even if it meant pitching honesty in characters and action over the side. (And there’s no shortage of people in the theatre happy to abet both.) For me, given the abundance (willing! reveling in it!) of falsity in our world, I simply want to witness engrossing moments of recognizable human truth, things I knew were true but forgot until the play reminded me--and if possible to be allowed to feel genuine emotion in doing so. And that is not the property of any age, race, gender, or theatrical form--but by the same token, no age, race, gender or theatrical form is absolved of the obligation to provide it. But that’s just me.

A:  Assuming you’ve exhausted all other possibilities for a healthy and happy life:

Take an acting class. Take another one.

Read every play you can, and go to every production you can--they all have something to teach you, even (especially?) the bad ones.

And for every play you read, read something that isn’t a play.

Find a significant other who, when asking why you’re staring out a window, believes you when you say “I’m working.” Then reward their belief.

And then don’t sequester yourself with nothing but artists for friends. Live in the world.

What Mom said about writing even though it was about broccoli: you won’t know if you don’t try it.

Sorry, but the real work starts with the rewrite. Might as well get there as quickly as you can.

Yes, you can stop for a muffin.

The work of others is a gift beyond measure. Learn to collaborate or go home.

That said: tell the truth as you understand it, and stick up for it.

And if you do stay for awhile: get over yourself as soon as you can. Your job, in the end, is to disappear, and leave a piece of charged life behind.

Trust the audience above all. But only in performance--never in a post-show discussion...

Don’t judge the road--of your play or your career--by the part of it you can see today; both are a long walk through all kinds of weather. Left foot, right foot, left foot, breathe.

And rejoice. You get to write!

I had no idea that I was older than Richard Hellesen! Go figure.

Waterproofing has become one of the fundamental requirements in constructing buildings, whether residential, commercial, or industrial.Waterproofing contractors in Tambaram It is done to safeguard the home from moisture intrusion, mold and mildew growth, and the concrete structure's deterioration. Though many waterproofing materials and methods are widely followed, the right one is chosen based on individualistic needs.