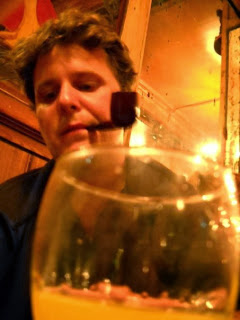 Q:  Tell me about Edison's Elephant.

A:  Edison’s Elephant is a play, co-written by David Koteles and myself, about the January 4th, 1903 public execution (by electrocution) of Topsy, a former circus elephant, on Coney Island. The electrocution was engineered by Thomas Edison, and filmed by his Edison Studios. The play examines this event from several viewpoints: that of Edison himself; Whitey, Topsy’s keeper; and various spectators (including a young boy). The play moves around in time, detailing the events leading up to the electrocution, as well as its future ramifications.

David and I had chatted about the Topsy story over brunch last summer (he thought there was a play in it). Soon after, David asked if I had anything to pitch to Metropolitan Playhouse for their Gilded Stage Festival. I said no, and asked him if he was pitching anything; he said no. So I suggested we collaborate. We decided to write about Topsy. I staked out the portions of the story which I most connected with, and David did the same. We eventually wedded our material into Edison’s Elephant.

A:  This summer I’m going to Minneapolis to workshop Retrospective, a play about the art world. In it, a curator dismantles the shack of a reclusive outsider artist, then reassembles it for display inside her museum.

I’m also working on another play I can’t talk about. It’s called The Revenger’s Tragedy.

A:  The Swiss Family Robinson was a story from my childhood which deeply affected me. This section in particular explains a lot about who I am as a writer and as a person:

“The ship had sailed for the purpose of supplying a young colony, she had therefore on board every conceivable article we could desire in our present situation; our only difficulty, indeed, was to make a wise selection. A large quantity of powder and shot we first secured, and as Fritz considered that we could not have too many weapons, we added three excellent guns, and a whole armful of swords, daggers, and knives. We remembered that knives and forks were necessary, we therefore laid in a large stock of them, and kitchen utensils of all sorts. Exploring the captain's cabin, we discovered a service of silver plate and a cellaret of good old wine; we then went over the stores, and supplied ourselves with potted meats, portable soups, Westphalian hams, sausages, a bag of maize and wheat, and a quantity of other seeds and vegetables. I then added a barrel of sulphur for matches, and as much cordage as I could find. All this—with nails, tools, and agricultural implements—completed our cargo, and sank our boat so low that I should have been obliged to lighten her had not the sea been calm.”

A:  It would pay its artists a living wage.

Be the most ruthless critic of your own work.

Great actors are gold; hang tight to them: I’ve been waiting to write a role for a certain actor in Edison’s Elephant for 15 years.

Be a genuinely nice person—not false-nice, party-nice. If you talk shit about someone/their play behind their back, it WILL get back to them. Then they’ll know you’re just a big fake.

Others’ advice which has helped me:

Jose Rivera’s Assumption 6: “Each line of dialogue is like a piece of DNA, potentially containing the entire play and its thesis.”

Fornes: “The presence of the Author violates the life of the Character. Your characters need autonomy; let them do and say what they wish. Manipulate them ONLY once they have life.”

Fornes again: “The meandering, ‘useless’ place has great value. It’s better to explore too much than to be too rigid.”

Wellman: “Avoid at all costs the horrible Swamp of the Already Known.”

Lynn Nottage: “Don't waste your time; get to the real thing. Sure, what's ‘real?’ Still, try to get to it.”

Bill Withers: “On your way to wonderful, you're gonna hafta pass through all right.”