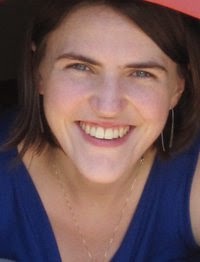 Current Town:  One foot in NY and one foot in Chicago.

Q:  Tell me about "Poetic Memory."

A:  In June, Christopher Norwood first approached me about writing a site-specific play set in a garden in Brooklyn as part of the Communal Spaces Festival that he was producing with Lillian Meredith. Unfortunately, I was out of town, and we decided that I couldn’t take the commission because I couldn’t visit the garden. So I filed the idea away under poor timing.

Weeks passed. And, devastatingly, a friend of mine passed away after a long fight with cancer. On the day of his funeral, I began to write about him. He was a poet and, as I wrote, I tried to imagine him in poet-heaven, playing word games with all the poets who had gone before. I wrote all that I could face writing. Then I checked my email distractedly.

Christopher Norwood was once again in my inbox, asking if I would re-consider writing a play—for a space called The Garden of Hope. I said yes, immediately. I desperately needed hope and a garden; the timing was remarkable. It was only later that I learned the full extent of the coincidence: The Garden of Hope was created by a group of people in memory of their friend, Hedi Kravis. In the same way, I wrote Poetic Memory to honor a friend who passed away too soon, and to imagine how he might live on in poetry.

A:  I am currently rewriting In the Belly of the Whale, a full-length contemporary adaptation of the Jonah story, which I recently workshopped at the National New Play Network’s MFA Playwrights’ Workshop at The Kennedy Center. I am also writing a 10-minute play based on the story of Scylla and Charybdis from The Odyssey for RedLeaf Theatre.

A:  My father writes children’s books, and as a child I was his guinea pig. When I was maybe 7 or 8 years old, he came up with the idea of a workbook that taught iambic pentameter to children. As he developed it, I wrote dozens of poems in meter, each one inspired by a different one of my stuffed animals. I think it explains a lot about my relationship to language.

A:  I would have everyone check their ego at the door. And hire more women and artists of color.

A:  First, be kind. Second, listen to kismet. Third, choose the paths that inspire you—and require you—to keep writing. Even when they are the paths of greatest resistance.