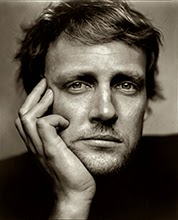 A:  In genre terms, Buzz is a mix of tragedy, comedy—even slapstick comedy—and also surrealism and horror. I’ve sometimes said the play is about global warming or environmental decay. And it is. But you could more accurately say that it’s about the disjunction between private domestic life, on the one hand, and great public and universal issues, on other hand: issues like climate change, capitalism, and, well, death. Which may make the play sound much heavier than it is. It’s a comedy throughout, even when it’s other things. The characters spend a lot of time swatting at flies, which may represent the themes I’ve mentioned or, at other times, may not signify much of anything.

A:  The main project is what I’m somewhat embarrassed to call a political treatise. I’ve also got a novel on the back burner.

A:  No one story comes to mind. But I grew up outside of a small town in western Colorado: no movie theater, certainly no theater theater, no record store, no internet as yet. So culture as such seemed to consist largely of the books on my parents’ shelves and my own books. Plus my mother and father both studied literature in college and referred to it with a kind of offhand reverence that must have encouraged me to take the written word seriously. I never saw plays as a kid, which may be why it struck me as such a revelation, later on, to see what actors can do with words that are already pretty good on the page.

A:  I wish plays were cheaper and—partly as a result of that—more abundant. Other media (books, film, recorded music, et cetera) are cheap enough that people feel free to consume a lot of the stuff and to be adventurous in what they try and passionate in their judgments. Whereas when you go to the theater, too often you’re paying so much that you’re afraid to take a risk and instead go see some reliable old warhorse of a play. And then you may not even feel free to hate it when it sucks. After all, it set you back a lot of money. And that’s when people feel like it’s worth spending their money on theater tickets at all. By the way, this is one reason I favor bare-bones productions. If you want a sumptuous spectacle, go to the movies.

A:  I’d rather let people who see the play guess who they are. And I think if you see Buzz it’s not too hard to make a correct guess or two.

A:  I like theater that can only be theater, plays that are content to be plays and don’t seem to wish to be TV episodes or movies. I like it when theater embraces its relative poverty of technical means—in terms of scenery, costumes, furniture, number of characters, et cetera—instead of seeming to hanker after the luxuriance of TV and film. And one reason I like this is that I think plays can do a better job than any other medium of showing how people live inside symbols, half-formed ideas, and stereotyped situations—abstractions from reality, in other words—at the same time that they’re absolutely flesh-and-blood and real. Theater can be good, simultaneously, at both abstractness and tremendous concreteness. And I like when it recognizes this about itself.

A:  I’m just starting out myself. So I’m probably more in need of advice than I’m able to dispense it.

A:  Lots of people saw Will Eno’s Realistic Joneses. But I don’t know too many people who have seen or read his Middletown, which is just as brilliant and maybe even better: a twenty-first century version of Our Town at the same time that it’s completely its own thing.