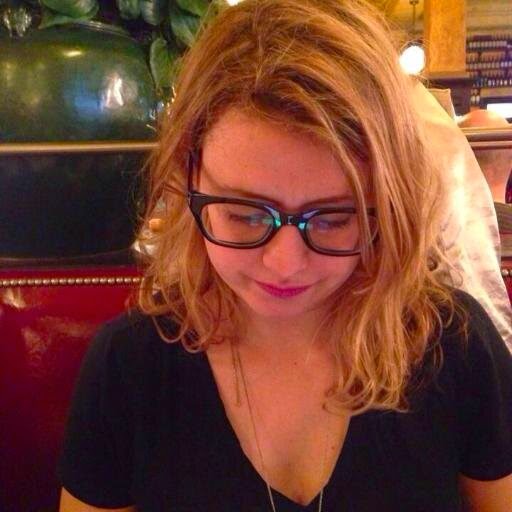 A:  I’m writing a play called “I Gained Five Pounds”. About a girl who gains five pounds.

I'm doing a SuperLab with Clubbed Thumb/Playwrights of play called "Daisy: A Study of Americans Abroad," which is about a girl studying abroad in Italy. (Loosely based on Henry James' Daisy Miller.)

And I'm thrilled to be in rehearsals at EST for "Five Times in One Night," which opens Feb 14th!
Q:  Tell me, if you will, a story from your childhood that explains who you are as a writer or as a person.

A:  In 8th Grade, I wrote a parody newspaper of our school newspaper “The Middle Scoop”, which I called “The Middle Snoop.” Biting commentary about the school curriculum, homework loads, and -- this was my downfall -- middle school gossip. (Which I didn’t claim was true, I was merely printing what people were saying…..)

I got in huge trouble but I learned important lessons about humor, brevity, and marketing. And building an audience!! (Did I peak in middle school???)

A:  MANY more theater critics. I’m traveling through Peru right now, and I’m obsessed with TripAdvisor. It’s so democratic -- everyone can weigh in about a restaurant or hotel, and you can read lots of different opinions. Leave your own opinion if you feel strongly! Ratings are based on cumulative opinions! Tourists look to that to decide where to go.

Maybe a TripAdvisor for Theater??

Well, I always find it very exciting when a production has something that feels theatrical in a primal way -- BIG moments. Walls crashing down! Musical numbers out of nowhere! A complete and unexpected shift in perspective or structure! I love a real show.

But I think ultimately what is most exciting to me in theater is when I see something tiny, and intimate, and quotidien that I recognize from my own life reflected back to me from the stage. Weird example, but in The Great God Pan, there’s a scene where a character has to stop talking to his mom because he’s about to go into the subway. I’ve had to end 10,000 phone calls in my life for that reason, and never thought twice about it, so seeing it onstage, something from my life, that happens to me, seems so revelatory.

And in Clare Barron’s You Got Older, a character has to get up very early in the morning and says “I feel like I’m about to go take the SATs.” I love that line. Because I know exactly what she means!

A:  Get on Twitter!!! Oh, I have lots of esteemed peers who flat out disagree with this. But it’s a way to reach an audience! And don’t all playwrights, especially the ones starting out, need an audience?

A:  I just read Sarah Ruhl’s book of essays and thought it was so so so fantastic and inspiring, a must-read for any playwright.

I’m a fan of the Maxamoo podcast and blog! They’re a group of young reviewers/theater fans who see a TON of theater and discuss it in a fresh, fun, intelligent way.

Thank you for another excellent post. The place else could anybody get that kind of info in such a perfect approach of writing? I've a presentation next week, and I'm at the look for such information.