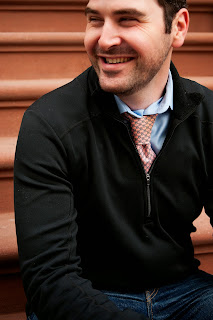 Q:  Tell me about Gordy Crashes.

A:  Gordy Crashes is about three people's experiences during the 2012 presidential election that took place a week after Hurricane Sandy hit New York.

I wanted to try and encapsulate what it felt like to live after an event that had such wide and varied effects. During the whole ordeal, I remember the strange, visceral knowledge that, at the same moment someone in Staten Island had been washed away in the flood, someone else in Bushwick had drank themselves to sleep watching Netflix. Some people were volunteering, others were not. Some people were displaced from their apartments or homes for a few days, others (like me) for a few weeks, and still others remain homeless to this day.

And in the immediate wake of it all, the city took part in the election. There was something compelling about having that huge national event being thrown into relief by such immediate, desperate circumstances, like a kind of proof that life was continuing on regardless. For some, that day marked the beginning of the second week of a waking nightmare, and for many others, it was just a Tuesday.

So I guess the play is really about a few people trying to figure out how to reconcile the two.

Oh, and also a break-up.

A:  I am finishing up work on a new play that will receive a workshop production this September at Stella Adler Studios. It's the culmination of a year-long residency I have with them, which has been really exciting. The play, Butcher, couldn't be more different from Gordy, so keeping both in my head for the last few months has been interesting to say the least.

A:  When I was a kid, my best friend Alex Moss and I had a semi-weekly radio hour. We had a very long list of contributors, guests, and programs, which is astonishing because there were only ever the two of us super cool kids in the room.

Whatever this says about me as a writer, it’s hard to describe how much fun it was to expel uninhibited silliness into a tape recorder, knowing that, at the end of it, there would be a “show.”

A:  Right now I am reading a lot work by Sir David Hare. The things he thinks are possible in a play are positively epic. I admire his intelligence because it is so obviously tied directly to his heart.

I’m also constantly rooting for and humbled by the three other playwrights that were in my MFA class at the New School for Drama. Dan Kitrosser, Matt Herzfeld, and Molly Haas-Hooven are great writers, great readers, and great friends.

A:  I am thrilled by anything that comes out of honest exploration on the part of the artists. Flaws aside, if a piece stems from honest, generous, and above all questioning exploration of how we all co-exist, then that's exciting to me, even if the finished product isn’t.

A:  Finish the draft. It’s the only thing I’ve found to be constant about writing plays. Just finish it, because you’re going to have to re-write it. Even if no one is beating down your door to produce it, even if you plan on sticking it under your mattress for the rest of your life.

(I should mention here that no one has a harder time taking this advice than me.)

A:  My play Butcher will be up after Labor Day in September. Details will be available on my website at www.sambyron.com.

Also, my band Self Esteem will be playing the Bowery Electric downstairs on May 27th. www.selfesteemmusic.com