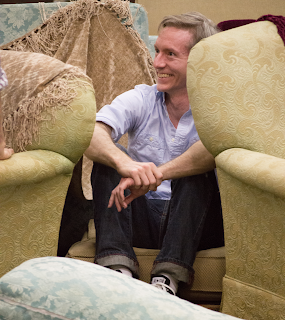 A:  I’m working through rewrites on my play GOOD MONSTERS premiering next season at Nashville Repertory Theatre (Frank is a Iraq War Vet and police officer who moonlights as a security guard to make ends meet. Safira was a shoplifter. She was running. It was dark. He thought she had a gun. She didn't. And now Frank's the guy who shot an unarmed teenager. But the dead don’t always stay quiet and now, while he waits for the trial, she haunts him every night. ) And just starting the submission process on my new play THE ICE TREATMENT ( Left behind on the garbage heap of history and misremembered by everyone –herself included- the world’s most infamous Olympian reinvents herself by writing the blockbuster screenplay of her epic struggle to become The Greatest Ice Skater Who Ever Lived. The problem is how much of the past she’s going to have to rewrite to do it.)

A:  We’ve been called a ‘magic island’ a couple of times this year, and actually that’s not too far off. Our goal is to make an honest-to-goodness capital-H-Home for our playwrights, so, you know, all wishes are granted. Each year, thanks to the generosity of Martha Ingram and now the support of the NEA, Nashville Repertory Theatre supports the development of five new plays for the stage; Four by emerging playwrights (Ingram Lab playwrights) and one by a playwright of national or international reputation (our Ingram Fellow.) The fellow typically works on his or her new play already in progress and the emerging playwrights develop a brand new play from scratch. We’re a generative residency where the playwright is given what they need as they need it during the earliest stages of development. Once a month we fly the playwrights down to Nashville to work on their plays with actors, directors, dramaturgs, designers and whatever professional support they require (including, like, a million phone calls and meetings with me.) Over the course of nine months the playwrights go from a pile of sentences to a muscular first or second draft of their brand spanking new play. As we are a development program first and foremost, our program’s only interest is to give the playwright a home to write the play they’ve been dying to write. We celebrate at the end of the year with a great big festival for Nashville audiences and livestreamed and archived on HowlRound TV for everybody else. We put the plays in front of our audience not as finished products but as art-in-progress to help launch them into their next stages of life. Tori Keenan-Zelt, one of our Lab Playwrights and all-around badass, described it like this: “It's challenging, but not competitive. It's a little bit like when you jump on a huge trampoline with your best friends, and you all go flying in different directions and into each other and, when the bounce hits just right, higher.”

A:  I grew up in Flint in the 80’s and the economic collapse of the city probably informs a lot of the stuff in my plays. And I grew up Irish Catholic so, you know, the past is buried both inefficiently and very close by. I know that’s pretty much the the core of me; All my plays are in some way exhumations. But instead of stories about economic death or what’s buried in the backyard, I’m going to tell the story about the fire hydrant. The week we learned to ride bicycles my brother and I went to the Emergency Room three times in four days. This is true. We are not athletes. The third trip was Carl getting a concussion because he fell off his bike and into a fire hydrant. He made it pretty far down the block, a good three or four houses away, and then he sort of wobbled and tipped over, and smashed his head into a fire hydrant. And it’s not like our block was full of fire hydrants or something, there was just the one. Even at the time I remember thinking Of all the places to fall, of course you go headfirst into the fire hydrant. Anytime anybody asks about a lesson from childhood or whatever, this is the story I think of. You’re going to fall, there’s no question about that. Mom and dad are gone and you’re going to fall at the moment you are just learning to ride the bike. You are going to fall at the worst time, in the worst spot, and everyone that can help you is going to be all the way down the block. You are going to fall. And that’s the exact moment when the world starts throwing fire hydrants at you. This idea is essentially where I start with my plays: They’re kind of about people who are stumbling or falling down and then, you know, the world starts throwing fire hydrants. That’s when I get really interested.

A:  I spent like three days on this question. I know the four hundred things I’d change; narrowing it down to one is daunting. Top three: 1) I’d invite everyone to the conversation. Total commitment across the whole community to diversity of voices. 2) I’d make it cheaper to attend and pay the artists more, even if it meant less large institutions and more small-to-mediums. And 3) I’d I think maybe I’d invite more people who are good at the business of business into our business.

A:  Always Chekhov and Caryl Churchill. And Josie Helming. And Doug Wright and Donald Margulies and Teresa Rebeck. And Caleen Sinnette Jennings and Melanie Marnich. And Paula Vogel and Steven Dietz. And Gary Garrison. And you, frankly.

A:  I’m a sucker for comedies in big houses. But I will say this: On balance, I think I’m always a little more juiced by a smaller company aiming to punch above their class than a big company doing the big they already know they’re good at.

A:  Structure is the magic trick. Learn it. Do it. Amaze your friends. Also: Sometimes we get into trouble by the way we frame things, and how we forget that simply re-framing them is an option. What I mean is: Think of the first draft as typing. Type and keep typing until you have a draft. Writing is when you get to the rewriting much farther down the road. If you take the pressure and preciousness out of the first draft you won’t freeze up as much and before you know it you’ll have something worth worrying about.

A:  My new play GOOD MONSTERS has its premiere Feb 11-27 2016 at Nashville Repertory Theatre (www.nashvillerep.org) , but I’m much more comfortable plugging other people’s stuff so: If you’re in NYC this month definitely go see TOGETHER WE ARE MAKING A POEM IN HONOR OF LIFE by Dean Poynor (www.inhonoroflifetheplay.com) June 4-28 2015; Look for Tori Keenan-Zelt this summer on Dusty Wilson’s MDQ podcast (www.mdqpodcast.com) with her play TRUTH DARE… ; If you’re at the Finger Lakes Musical Theatre Festival be sure to check out SKIN AND BONES by Andrew Kramer and Ben Clark (no joke: it’s a musical about The Bone Wars) July 9-11 (www.fingerlakesmtf.com); and applications are still open for the 2015/16 Nashville Rep Ingram New Works Lab. We’re accepting applications until midnight June 21st at www.nashvillerep.org/ingram-new-works-application