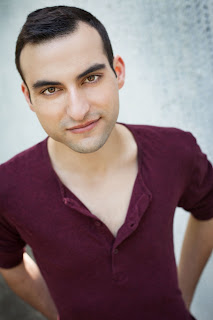 A:  My current passion project is a one-act called Crisis: Ocean Planet, which was inspired by the Dawn Brancheau tragedy at SeaWorld in 2010.

So every other month I commission 7 playwrights (I'm typically one of them) to create new plays based on the same set of rules. Rules change every time so you're never getting the same show; they can be as simple as 'math' or as specific as 'a back-handed compliment on page one, followed by 10 seconds of silence.' Each group then gets 5-7 hours of rehearsal time and viola, it's showtime. The event is always a ton of fun... definitely a 'theater party.' Plus free beer.

A: My parents divorced when I was 5 years old, and I lived in 12 different houses/condos/apartments (between both parents) between the ages of 5-17. Neither my Mom nor Dad ever stayed in the same place for too long. But we would literally keep moving within the same town (Hamden, CT). I'm sure that subconsciously explains why I'm always on the go, love sleepovers, am somewhat neurotic, am somewhat cynical about love, and why I always opt for month-to-month rentals in NYC.

A:  Right now: Joshua Harmon, Rob Askins, Abby Rosebrock, Dan McCabe. They're writing the kind of theater that I'm talking about in my answer below. Reading one of their plays is an entire experience in itself. Get the popcorn.

Current acting hero: Pablo Schrieber (Mendez on OITNB). He should be on Broadway yearly. He's so hilarious because he's so genuine.

A:  If you meet important people or go to an important event, and you're wearing glasses, they'll take you more seriously.

Also: pay attention to pop culture because there are some thrilling things to write about. I had a BALL recently writing a ten-minute play where I asked myself "what would the last meal look like before Teresa Guidice of Real Housewives of NJ fame begins her jail sentence?"

A:  Rule of 7x7: Summer Edition is Friday, August 21 at 7pm and 9:30pm. $12 tix, free beer included. This round, we've got plays by Lia Romeo, Charly Evon Simpson, Jeff Ronan, Colin Waitt, Natalie Zutter, Jack Gilbert and myself. You can watch the promo video for that right here. Twitter: @RuleOf7x7.

I also developed and starred in this web series called (NOT) BROTHERS, about two half-brothers. You can watch the whole 1st season right here.

For all other Brett Epstein goings-on, my official website is: www.ItsBrett.net.

The agency understands how complex and time-consuming that Cheap Editing Services can be. If you simply don’t have the skills you require to complete a good paper, or you’re pressed for time, or you can always order Best Coursework Writing Servicefrom them.