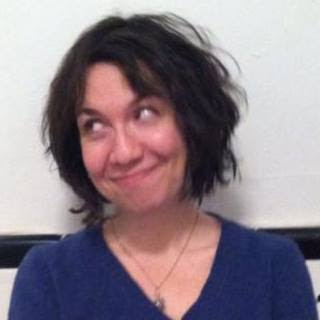 Q:  Tell me about your recent piece in Steppenwolf’s First Look Festival

A:  I’ll Get You Back Again is very close to my heart. It’s set in Berkeley, not far from where I grew up in Oakland, and is inspired by the Bay Area 60s culture I was raised in. My parents were part of a very close group of friends who hung out in San Francisco during the Summer of Love. I grew up playing violin with my dad’s band, going to Buddhist teachings, and watching free San Francisco Mime Troupe shows in the park. It’s so disorienting to watch that way of life (which I loved and hated and took for granted) get swept away in a tsunami of tech development. And it’s painful to watch my parents’ friends growing older, to realize that my time with them is limited.

The play centers around a bitter comedian in her 30s, Chloe, who agrees to play bass in her dead father’s seminal psychedelic garage rock band. The play tackles what we inherit from the sixties, the joys and discontents of collaboration, and the search for transcendence in music and comedy. The characters are larger than life, ridiculous, but full of real human emotion. I’m always trying to write plays that have me laughing and crying in the same moment; this one is as close as I’ve gotten.

A:  A massive, huge-cast epic called The Place We Built, based loosely on the true story of my friends, who founded a squat-bar-bafe-theater-music venue-arts space in Budapest that became a home for dissent and protest against Hungary’s current right wing government. (I used to live in Budapest, and remain very much in love with the city.) It’s about my friends’ generation, who were children when the Berlin Wall came down, and came of age believing in “European” values of tolerance, diversity, and democracy. Now, they’re having children at a time when Europe is in crisis, and the very idea of progress seems to be under attack.

On the other end of the spectrum, I’m revising a two-woman play currently called Duet. Set one wild New Year’s Eve, the play tracks two life-long best friends as they ricochet through years of shared memories. They shape-shift into scores of other characters as they try to pin down what—and who—they are to each other now. The play asks whether you can ever truly know another person, or even yourself.

A huge part of my life as a playwright is working with devising ensembles. My latest outlet for this type of work is creating a new musical with musical geniuses The Bengsons, commissioned by Ars Nova. So excited.

My day job is writing for Blue Man Group, which is essentially a job as a professional deviser. I’ve had a lot of weird jobs, but this is far and away my favorite so far.

Last but not least, I’m also starting a new play and a television pilot.

A:  Man, this question could really take me down a rabbithole. About forty different stories come to mind, but here’s what bubbles to the surface:

The first story I ever wrote (I was probably four years old) was inspired by my hatred of washing my hair. A little girl goes so long without her hair that a family of spiders make a nest on her head. She discovers the spiders are amazing singers, they make a hit record, the girl marries Michael Jackson and lives happily ever after. Weirdly I was already writing about things that made me uncomfortable, already thinking about community, and already fixated on music. I don’t know what to tell you about the Michael Jackson thing. I loved Thriller.

Another story: as a kid I was obsessed with dreaming up alternate worlds. I made maps of imagined countries and cities, designed rituals and national costumes for fictional cultures, wrote pamphlets for schools that didn’t exist, and drew up newsletters for clubs that had no other members.

I know it’s fashionable to claim other peoples’ dreams are boring, but I am always fascinated by the types of dreams other people have. I have close friends plagued by nightmares so vivid, they barely sleep. Another friend regularly wakes himself up laughing. One of my high school buddies only dreamed in patterns; her worst nightmare was just white slanting lines on a black background. I’ve always dreamt about exploring buildings, getting lost in houses or castles or locker rooms that keep revealing more and more rooms, hallways, secret passages, vast basements. I’ve only had one important theater dream. I dreamt I ran an improv troupe—sort of like a Harold team—that improvised entire epic, kaleidoscopic plays. I remember feeling incredibly proud. Someone standing next to me asked how it all worked and I said “We create tiny universes and then destroy them.” Then I woke up. I’m sure my very next dream was about wandering through a parking garage or something.

A:  At the top of my very long heroes list are Caryl Churchill, Dario Fo, Wallace Shawn, Suzan-Lori Parks, Tony Kushner, and August Wilson. Chekhov, Moliere, Goldoni, and the great traditions of physical comedy from commedia dell’arte through silent film are important to me. Three movies I often think about when writing are Kusturica’s Underground, Mel Brooks’ Blazing Saddles, and Sun Ra’s Space Is the Place.

A:  I just basically want to be jolted out of my mental habits, so that I’m suddenly aware of existing in a living moment. I want to feel that a room full of strangers has somehow become a community. I want to leave the theater seeing the world through new eyes. Any kind of theater that gets me there excites me.

A:  I’m still starting out myself, but here is some of the best advice I’ve been given.

Nothing is lost, nothing is wasted. Don’t be afraid to write things you’ll cut, or to offer ideas that might make you look stupid. Don’t mourn too much over cutting writing you love—it’s on its way to its true home, in another project.

It gets said all the time, but it bears repeating—find your people and make work with them. It’s beautiful to have many artistic families that overlap and intermarry.

Business Stuff (this is what I need the most advice on):

Embrace failure, embrace rejection. Take it to heart and then keep moving. Kick your own ass a little. A wise woman once told me that you have to get fifty rejections before you get one yes. Every victory is bought with multiple rejections. Your job is not to win that contest or that fellowship or that residency. Your job is just to apply. If you did that, you’re doing your job. Keep doing it.

Find one good playwright friend to share your successes and your failures — especially your failures—with. I share my playwriting ups and downs with Chisa Hutchinson, and she has saved my sanity on many an occasion. When she succeeds (and she’s good at succeeding), I am so freaking happy. (Check out Dead and Breathing at National Black Theatre this fall!)

You can do anything you want, but you have to know exactly what you want. Envision exactly where you want to be, in your writing, and in your career, with as much specificity as humanly possible, and then make a practical plan to get there. Break your goal down into action steps. Break those steps down into more steps. Remember to approach your path with the same ingenuity you bring to your writing.

Most importantly, know why you do what you do. Remember that you are on a mission that has nothing to do with money or praise or any of that other crap. You know what your reasons are. Keep them close.

A:  The Place We Built will be read by Mosaic Theater in the Women’s Voices Theater Project, October 19.

And I heartily recommend the upcoming work of these friends:

Stephen Karam’s The Humans at Roundabout
Michael Yates Crowley’s Song of a Convalescent Ayn Rand Giving Thanks to the Godhead in the Lydian Mode at ART in Boston
Eliza Bent’s Toilet Fire at Abrons Art Center
The TEAM’s RoosevElvis at The Royal Court in London
Chisa Hutchinson’s Dead and Breathing at National Black Theater
Lauren Yee’s King of the Yees at the Goodman in Chicago
Sarah Burgess’s Dry Powder at The Public
Emma Goidel’s A Knee That Can Bend at Theatre Exile in Philly
Rachel Bonds’ Swimmers at Marin Theater Company in California
Robert Murphy's Love, Sex, and Death in the Amazon at Paradise Factory

Also, check out The Bengsons!