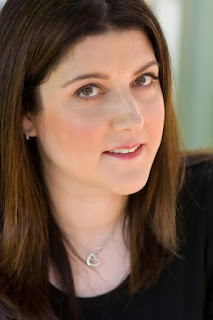 Q:  Tell me about The Good Adoptee.

A:  It is the true story of my search for my origins in the face of sealed records in New York State. I developed it in close collaboration with the amazing actress, Anna Bridgforth, and the incredible actor/writer, Bob Brader, who is my dramaturg. The Good Adoptee is a solo show where Anna plays a dozen characters, including me, and only one first name have been changed. It’s one of the scariest and most challenging pieces I’ve ever written - and one of the most rewarding.

A:  A 90-minute two-actor production of my play, Circle, starring Bob Brader & Anna Bridgforth; an S&M themed TV series; and a play that I’ve been working on forever: Conversations with My Divorce Attorney.

A:  My mom, who is an phenomenal artist, took me to the MOMA all the time when I was little. There are always multiple warnings not to touch anything even before we even enter the museum, plus the intimidating guards watch you like hawks. Once, when I’m three, I spot this massive Jackson Pollock on the wall at the end of the gallery. Suddenly, I take off like a shot and run across the gallery towards the Pollock as fast as I can. People gasp and the guard nearly has a stroke. About a foot from the painting, I stop in my tracks, turn around and laugh.

A:  Accessibility. For audiences seeing it and for the artists making it. Theater should be for every single person in our community. Right now it's too pricey, aloof and removed. It has been heartbreaking to see tons of independent venues close over the course of the last decade in this city. Independent theaters - both venues and artists - need to be funded and supported or they will cease to exist. That may have been more than one thing.

A:  Theater that is raw, vulnerable, risky and nonlinear. Both powerful stripped down true stories and heightened wildly imaginative invented extravaganzas. I love a completely compelling and visceral experience in the theater that forces the audience to delay thought and reflection till after the performance or even the next day.

A:  Hear your plays read aloud and get them up on their feet. I was given this advice when I had written my first play, so I’m paying it forward. A famous actor told me: it doesn’t matter if you do your play on a street corner, it just needs to be up on its feet in front of an audience so you can hear and see it. If your play stays on the page and on a shelf, your next play will never be any better than the first. I don’t think continual readings help move a play forward either - it’s got to be up or it will remain a literary expression on the page and not a play.