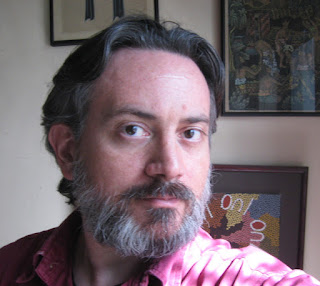 Q:  Tell me about Speakeasy.

A:  “Speakeasy – John and Jane’s Adventures in the Wonderland” is a Roaring Twenties fantasy blending Lewis Carroll’s Alice stories with the real life Queer subculture and characters that flourished in the illicit world of speakeasies during Prohibition. John and Jane Allison are loving newlyweds, who are initially not consciously aware of their own homoerotic capabilities. But then Jane Allison kisses her neighbor Roberta White and goes down the rabbit hole of a basement speakeasy entrance. And John Allison slides through the looking glass of a public bathroom mirror after accepting an illicit sexual favor. Both will experience fantastical Carrollesque adventures within the nightclubs, buffet flat parties and drag balls that flourished before the end of Prohibition as well as the social conservatism of the 1930’s that put an end to that world. Both John and Jane also will encounter the Wonderland nightclub’s master of ceremonies Chet Cheshire and make love to lesbian nightclub singer Duchess Bentley and famed female impersonator Julian Carnation. Will John and Jane’s relationship survive the revelations of their unspoken sexual desires and mutual infidelities?

A:  Producing the showcase performances of "Speakeasy" at the Theater for the New City; collaborating with Jack Hilton Cunningham on the 1950’s Mississippi musical “Feedstore Quartet” and with the Jazz singer Jacqui Sutton on the song cycle “American Anthem”.

A:  When I was in fourth grade I wrote a short play called “Santa Claus is Sick,” featuring a grippe felled Santa and his six concerned elves. My teacher decided to produce it theatrically in our classroom, with me as co-director. When our lead took sick in real life I wound up having to take on the role of Santa too, since I knew the lines. Thus my future career as writer-director-producer-performer got its start or was at least dramatically foreshadowed.

A:  That the “business” of “show business” wouldn’t be the overwhelmingly operative word that it is.

A:  Theater that opens up new worlds, reaches deep into our hearts and souls, inspires the imagination. Which can be achieved in any style, genre and venue of theater.

A:  Find ways to get your work performed and heard, anywhere, anyhow, even if it is a reading in your living room. You learn most by hearing and seeing your work brought to life by other artists before audiences.

A:  "Speakeasy" performs February 18 – March 13 at the Theater for the New City with the official opening night February 20, 8pm. For information and tickets, visit http://theaterforthenewcity.net/speakeasy.html