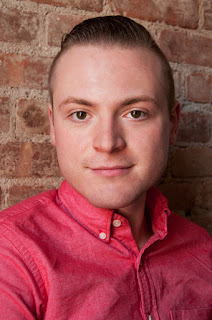 Q:  Tell me about Troll.

A:  Troll is a play about the internet and New York City - which might be the same thing. It's also a period piece set in 2012. Here's a blurb:

It’s Halloween Weekend, 2012. A storm is brewing, a major election is on the horizon, and it’s generally a horrible time to be young and ambitious in New York—at least for Ari Jacobs, a blogger left desperate, depressed and temporarily homeless in the wake of an unusual break-up. But he’s on the brink of something serious, as he plans to reveal the identity of the biggest Troll in the history of the web, ruining the man behind the persona’s offline life. Is Ari morally capable of squashing one person’s existence in order to turn around his own?

The play is going up this month as the inaugural production of The Rushline Company, which is insanely gratifying. I'd resigned myself to the fact that nobody was ever going to do it - the act of writing it and developing it (the play was my thesis at NYU) was really big for me. It feels like the play on which I really learned how to write a play, and I'd finally gotten to the place of like "Okay, Dayenu, onto the next," and then one day I got an e-mail from two people I've never met saying they want to do my play. Life is funny.

A:  I just got back from MacDowell (which is the best place on earth, even when its cold and every creative person of every stripe should be applying to constantly) where I finished a new play - which I think is the third in a "trilogy" about mothers and sons and the suburb of Baltimore that I grew up in.

I'm also writing a screenplay, which is a romcom that's kind of sort of inspired by Vanderpump Rules.

A:  My grandparents got me started on theatre at an early age - they're the reason I'm a playwright. We would listen to cast albums together all the time - that PBS documentary Broadway: The American Musical was very big for my grandma (Grammy) and I. And then when I was a little older we started going to play-plays, and something clicked (probably because I can't carry a tune so I felt relegated to forever be an audience member when it came to musicals.)

Anyway, when I was five, they took me to my first Broadway show, which was the 1996 revival of The King and I. When the king died (spoiler, I’m sorry) I was BESIDE myself, because I thought he was really dead. I’m five years old and a man just died in front of me onstage. My grandparents tried to reassure me that it was just pretend, but I didn’t buy it until the king came out for curtain call – so I guess that’s how the conceit of live theatre/fictional storytelling got instilled in me.

A:  My partner Jeff Augustin, the astonishing literary manager/dramaturg/force of nature Sarah Lunnie, my pal Charlie O'Leary (who reads all of my plays before I do) - These are people who constantly remind me that theatre is a compulsion more than its a career, and that you have to allow yourself to be led by your curiosity, and be a good watcher/reader of things, and generally operate with kindness and decency and excitement and love.

A:  Ticketing. And not just making tickets cheaper, but making cheaper tickets easier to come by - I know there are ways to get into almost any show without breaking the bank, but I'm sick of it being such a hassle. I don't think that millennials are lazy, but we do like it when things are streamlined. It’s not a matter of being “willing” to spend the money on entertainment. I have plenty of friends who go to movies a few times a week, pay whatever they have to for Netflix and Hulu Plus and HBO Now and whatever else, go to the museum, etc – they would love to go to the theatre, but we live in a world where $40 is a “cheap” ticket, and even to snag that there can be a million steps.

We’re not losing generations of theatre fans this way – where there are high schools letting students direct productions of Spike Heels (true story - shoutout to Peter King and the Park School) there will always be theatre fans – but we’re losing fans of specific writers.We need to cultivate audiences who pay $25 to see John at the Signature, fall in love with Annie Baker and can afford to go see all of her plays wherever they happen.

A:  The first thing that comes to mind is the wall that crashes to the ground and sends cotton balls flying into the audience in Branden Jacobs-Jenkins' An Octoroon. It's such a perfect meeting point of script and direction and design. And it's legitimately surprising - here's this play laden with these disturbing images that are all about this country's and this art form's history of racism, but then simultaneously, he's making a play about the nature of plays, about how a play by nature is a story that falls apart. I was Branden's assistant when the show first went up at Soho Rep, so I saw that wall fall a lot and it got me every time.

A:  There’s this line in Sondheim’s Merrily We Roll Along – “Pick yourself a road / get to know the countryside.” I try very hard to take that to heart, because patience is hard for me and I’m always like, how can I enjoy the time between point A and B? But I guess I’m realizing more and more that everything that’s happened for me has been a new kind of “road” – I'm very much still starting out, and the more I accept that the more it feels like I'll be starting out forever -
if you try to make any new experience like some experience before it, you’re kinda bound to fail.

A:  TROLL runs April 8-24 at the Secret Theater in LIC, which is SUSPICIOUSLY easy to get to. Come!